A former member of El Salvador's military high command is closer to being prosecuted for his role in the 1989 massacre of six Jesuit priests and two women, now that a U.S. federal judge has approved his extradition to Spain.

In a long-awaited decision handed down Aug. 21, District Judge Terrence Boyle upheld a 2016 lower court ruling to extradite Col. Inocente Orlando Montano to Spain to stand trial for one of the most notorious atrocities of El Salvador's civil war.

Spain has long sought Montano's extradition, along with those of 16 other ex-military men it has indicted in the assassinations. Five of the six Jesuits were from Spain, giving Spanish courts a jurisdictional basis to pursue the case.

A day after Boyle's ruling, however, El Salvador's Supreme Court nullified the arrest orders for the other 16 defendants. While the nullification appeared to be a setback, the Spanish court only needs one defendant to proceed with a trial that could uncover key details of the case involving heretofore-untouchable high-ranking Salvadoran military officers, many with close ties to the U.S. military.

Boyle's ruling upheld that of Magistrate Kimberly Swank who concluded that the evidence showed Montano had participated in the "terrorist" murder, tried to conceal the military's responsibility, and attended key meetings to plot the assassination of Jesuit Fr. Ignacio Ellacuría, along with all witnesses.

Ellacuría was the rector of the University of Central America where the priests, their housekeeper and her daughter were slain by an elite U.S.-trained unit. At the time, he was a key mediator in peace talks between the U.S.-backed, rightwing Salvadoran government and the Farabundo Martí National Liberation Front (known by its Spanish acronym, FMLN). The talks included discussions about purging the military of officers linked to atrocities.

Swank noted in her ruling that Montano — who's a graduate of the same university where the Jesuits were assassinated — oversaw the government radio station which made threats against Ellacuría, calling him "an armed terrorist and an intellectual figurehead for the rebel FMLN."

At the time, Montano was the Vice Minister of Defense for Public Safety, in command of the National Police, the Treasury Police, and the National Guard.

Montano entered the United States in 2002, falsely stating on immigration papers that he had never been a member of the Salvadoran military. In fact, he — like most of the officers cited for the Jesuit massacre by the U.N. Truth Commission — was trained at the U.S. Army's School of the Americas, now known as the Western Hemisphere Institute for Security Cooperation.

Montano was discovered living outside of Boston in 2011 by the Center for Justice & Accountability; he was later convicted for immigration fraud and perjury and imprisoned in North Carolina where he has been detained pending extradition.

The center's former justice program director Almudena Bernabeu — who filed a criminal case before the Spanish National Court on behalf of the family of one of the Jesuits — said she was "thrilled" by Boyle's ruling. "It has been a long wait."

Montano's extradition "will finally provide the long awaited opportunity to have a trial and with it, lead to truth and justice for this terrible crime," said Bernabéu, who this year co-founded the non-profit human rights law firm, Guernica 37 International Justice Chambers, and continues to represent the Jesuit's family.

The center's former senior legal adviser Patty Blum, who has worked with Bernabeu on the Jesuit case since its inception and now serves as the Guernica 37 board chair, praised U.S. prosecutors who "have tirelessly pursued Montano's extradition."

It's urgent that Spain be given "the opportunity to exercise its jurisdiction to prosecute the crime," said Blum, a clinical professor of law emerita at Berkeley Law, University of California, "if El Salvador is not going to execute the outstanding warrants for the defendants in the case and is not going prosecute anyone." 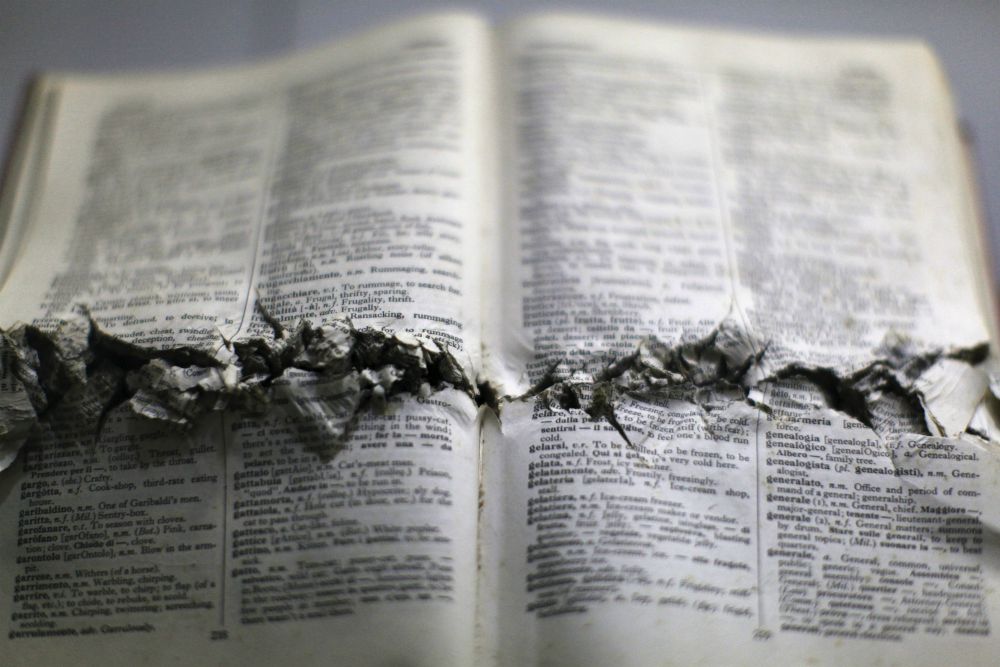 A dictionary of one of the six Jesuit priests killed in El Salvador in 1989 is exhibited at the Museum of the Central American University in San Salvador. (CNS/Jose Cabezas, Reuters)

Montano is seeking a stay of extradition to appeal Boyle's ruling; he's not entitled to an automatic stay, and his request seems likely to be denied.

The general standard for a stay is its "likelihood of success on the merits," Blum said, and Montano has raised every argument he has before both Boyle and Swank but "has unequivocally failed to persuade a U.S. court that his extradition should be halted."

If no stay is granted, there's no legal impediment standing in the way of Secretary of State Rex Tillerson's proceeding with the extradition. Tillerson has the final say over whether Montano is sent to Madrid.

Politically, Blum said, "it's in the national interests of the U.S. to comply with Spain's request to prosecute a suspect in U.S. custody for terrorist murder since it may one day be that the U.S. seeks to extradite from Spain a suspect in a crime of terrorism."

Montano would be the highest-ranking official in recent U.S. history to be extradited for human rights violations.

The Jesuit massacre, which sparked international outrage and led to a United Nations-brokered peace in 1992, was not the only war crime Montano has been implicated in. Documents and testimony show that troops under his command committed more than 1,100 other human rights abuses.