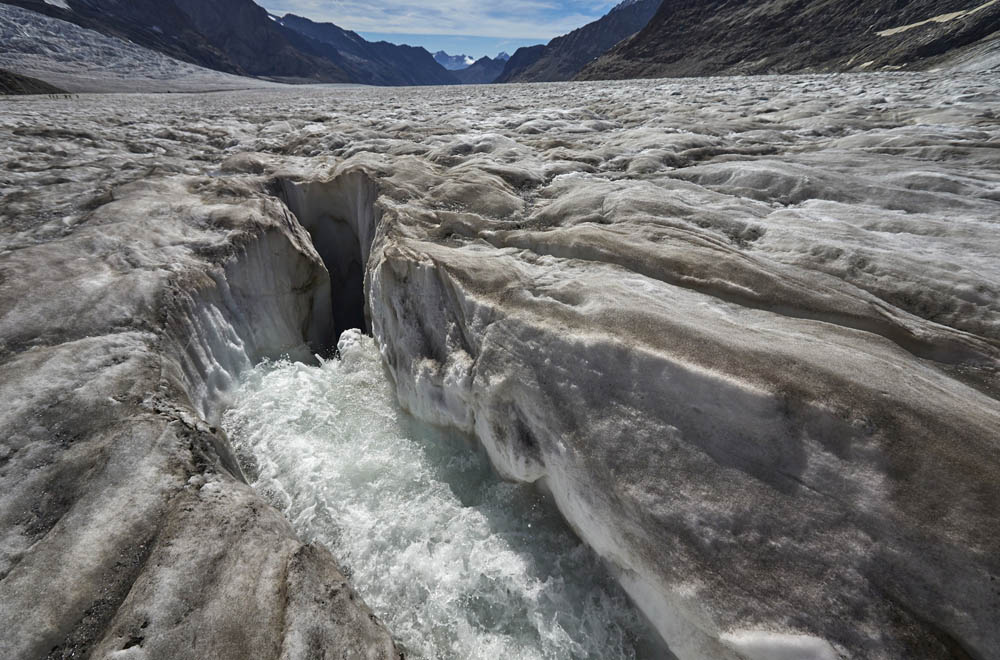 Water from the melting Aletsch Glacier in the Swiss Alps runs down through a hole in 2015. (CNS/Reuters/Denis Balibouse)

The global community finds itself at a "can't-fail moment," United Nations officials said with the release of a major report that foresees an ecosystem-altering climate crisis mere decades away that will impact the lives of hundreds of millions of people unless "unprecedented" transitions across society occur.

Catholics who work on the climate change issue say the world has "a moral and ethical imperative to act," with urgency and decisiveness.

"We need to be as adamant in standing up for life in addressing climate change as we are about the vocalized issue of abortion," Charity Sr. Carol De Angelo said. "Can we broaden this as a life issue?"

The report, from the U.N. Intergovernmental Panel on Climate Change, or IPCC, an advisory group of scientists to the international body, projected that at current rates of greenhouse gas emissions the globe will reach 1.5 degrees Celsius (2.7 degrees Fahrenheit) of warming above preindustrial levels around 2040, and as soon as a decade earlier.

"We need to be as adamant in standing up for life in addressing climate change as we are about the vocalized issue of abortion. Can we broaden this as a life issue?"
—Charity Sr. Carol De Angelo

As temperatures rise, the Intergovernmental Panel on Climate Change report stated, the risks from climate change become worse — particularly for vulnerable populations, indigenous peoples and communities dependent on agricultural and coastal livelihoods, all at a "disproportionately higher risk of adverse consequences" — and increasingly devastating for societies and ecosystems as warming approaches 2 C (3.6 F) and beyond. The report projected "robust differences" between the two global warming trajectories.

"It's bad news," Sr. Teresa Kotturan, the U.N. representative for the Sisters of Charity Federation said of the report's findings. "It’s bad because you need the political will and economic capacities to implement change. The steps we need to reduce greenhouse emissions are costly."

The seemingly small difference in degrees could mean the difference in preventing several hundred million people from falling into poverty by mid-century, the report found. In addition, it projected that limiting global warming to 1.5 C could expose 420 million fewer people to severe heatwaves, 10 million fewer to risks brought by rising seas, and limit Arctic summers without sea ice to once a century rather than once per decade with 2 C of warming.

Additionally, nearly all coral reef would be wiped out under a 2 C scenario. Avoiding temperature rise to that level would also lower the risks of heat-related morbidity and mortality and the spread of vector-borne diseases like malaria and dengue fever, and reduce the risks of flooding, infrastructure damage and saltwater intrusion to people living on small islands and low-lying coastal areas.

"A half of degree of warming makes a world of difference," said António Guterres, U.N. secretary-general, in a statement.

He called the report "an ear-splitting wake-up call to the world. It confirms that climate change is running faster than we are — and we are running out of time."

The report, released Oct. 8 in South Korea, was written by 91 scientists who reviewed more than 6,000 scientific studies. It was commissioned as part of the 2015 Paris Agreement on climate change.

Under the accord, 195 nations agreed to limit average global temperature rise "well below" 2 C and to work toward the 1.5 target. Island nations, buoyed by support from civil society groups as well as the Vatican, pushed for the more stringent goal, believing that greater warming could wipe out their homes and cultures beneath rising seas.

Current pledges under the Paris Agreement would only hold global warming to 3 C; a report from the Trump administration earlier this summer projected a 4 C rise by 2100. At the next U.N. climate change conference, COP 24 in December in Katowice, Poland, nations will gauge their progress to date and potentially ramp up their commitments.

The IPCC report highlights the "significant" benefits of limiting warming to 1.5 C compared to 2 C, but also the "considerable challenge" it poses for the coming years, said Veerabhadran Ramanathan, professor of atmospheric and climate sciences at the Scripps Institution of Oceanography at the University of California-San Diego and a member of the Pontifical Academy of Sciences.

"It's still doable, but it's going to take Herculean efforts. And I personally [think] it will require a lot of leadership from the U.S.," he told NCR.

Under President Donald Trump, the United States, the planet's second-leading polluter, has taken a back seat on climate change. Trump said he will withdraw the country from the Paris Agreement at the earliest opportunity, and his administration has worked to roll back a number of environmental measures, including moves under President Barack Obama to limit carbon emissions from power plants and the auto industry.

Related: At Season of Creation's end, know this: Climate change is here

In the absence of federal action, a coalition of 3,000 states, cities, businesses and organizations have pledged to continue U.S. efforts to reduce greenhouse gas emissions, highlighted last month at the Global Climate Action Summit in San Francisco.

According to the IPCC report, capping global warming at 1.5 C would require a dramatic drop in carbon emissions in the next decade — a decline of 45 percent from 2010 levels by 2030 — and then reach net-zero by 2050. The climate models also include scenarios where temperatures temporarily "overshoot" the 1.5 target before eventually falling back down.

Achieving that goal would require "rapid and far-reaching transitions" across sectors — energy, land, urban and infrastructure and industrial systems — within the next two decades, the report found. Renewable energy would need to produce 70 to 85 percent of electricity by 2050 and coal essentially eliminated as an energy source. Millions of acres of farm and public lands would need to be converted for reforestation and the production of crops for use as energy sources. In addition, technologies either not yet invented or at scalable capacity, including mechanisms to pull carbon dioxide from the atmosphere, would need to be developed.

Such a transformation on that scale has "no documented historic precedent," the report said.

"Limiting warming to 1.5ºC is possible within the laws of chemistry and physics," said Jim Skea, one of the report's authors," but doing so would require unprecedented changes."

Dan Misleh, executive director of U.S.-based Catholic Climate Covenant, said the message the report sends "is we have to get serious about tackling this issue. Much more serious than we have been so far."

Catholic sisters who represent their congregations at the United Nations and are supportive of international efforts responding to climate change said the implications of the U.N. report are worrisome.

What is particularly troubling is that the effects of climate change now stem from earlier rises in temperatures, the Charity sister Kotturan noted, meaning radical steps must be taken immediately "to reduce [greenhouse emissions] so that we can meet of challenges of 2040. We created it [the problem], now have to devise ways to stop it."

More pressure from "the grassroots" and from religious communities need to be applied to governments to act, Kotturan said, arguing the "greed is taking over the common good" throughout the world.

"Change always happens from the bottom up, from the grassroots," she said.

De Angelo, director of the Office of Peace, Justice and Integrity of Creation of the Sisters of Charity of New York and who works with Kotturan at the United Nations, said the report’s implications for the future are stark.

She told NCR that she hopes U.S. Catholics are beginning to see the issue of climate as part of a life-based ethic. "What about our children, what kind of world are we leaving them?" she said.

In the United States, where the climate change debate has become subsumed in the country’s partisan political divide, policy work is needed to promote the common good, De Angelo said.

"There is a moral and ethical imperative to act," she said, noting her own advocacy efforts to promote Pope Francis’ 2015 environmental encyclical, "Laudato Si', on Care for Our Common Home."

"I don’t want it become a 'Republican-Democratic thing,' " she said. "Everything has become so partisan." Speaking of her work and the work of other sisters at the United Nations on the environment, De Angelo said the sisters are not acting from a position of political partisanship. "We’re about promoting the Gospel."

Ramanathan, the climate scientist, said his peers and policymakers have to work with faith leaders to build up the collective will to take the massive steps called for in the IPCC report. Part of the solution, he said, involves better communicating the science behind climate change and future projections to those having difficulty accepting it.

"The key issue to me is unpacking climate change science from all the issues that divide. … It's an issue of data-driven science, and an issue of huge human tragedy," said Ramanathan, who in recent years has given more than a dozen speeches to religious audiences, including in February at Creighton University, in Omaha, Nebraska.

Misleh of Catholic Climate Covenant said that while there are many hopeful signs of progress on climate action in what businesses, faith communities and other sectors are doing, the world can't rely on technology alone to bring about the necessary change. An examination of how people, particularly in developed nations, live daily must also be a part, pointing to Francis' description in Laudato Si' of the world facing not separate crises but "one complex crisis which is both social and environmental."

"Those of us in the wealthier countries need to be much more concerned about our lifestyle choices than we ever have been," Misleh said. "Because those choices … have a tremendous carbon footprint."

This story appears in the COP24 Poland feature series. View the full series.
A version of this story appeared in the Oct 19-Nov 1, 2018 print issue under the headline: Catholics urge action as UN report forecasts climate crisis. 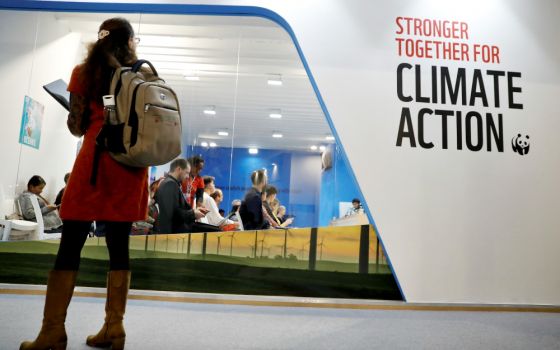 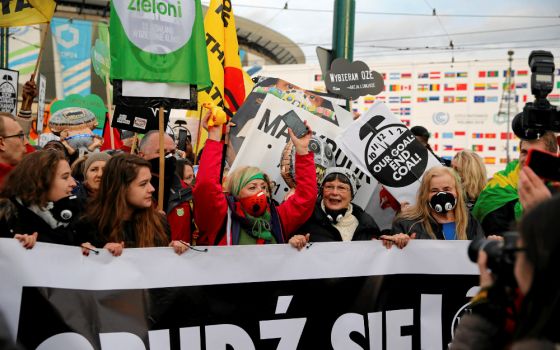 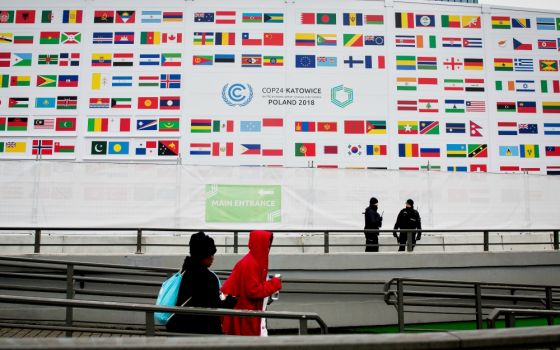