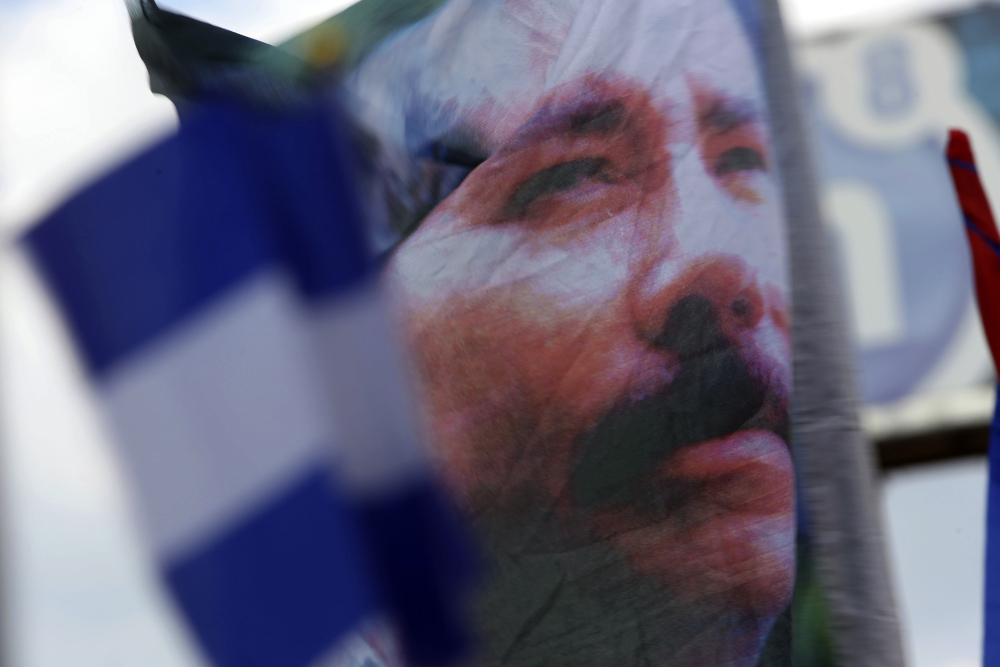 A banner emblazoned with an image of Nicaragua's President Daniel Ortega is waved by an Ortega supporter in Managua, Nicaragua, April 30, 2018. (AP file/Alfredo Zuniga)

Earlier this month, Nicaragua shuttered seven radio stations belonging to the Catholic Church and launched an investigation into the bishop of Matagalpa, Msgr. Rolando Álvarez, accusing him of inciting violent actors "to carry out acts of hate against the population."

This is not the first time President Daniel Ortega has moved aggressively to silence critics of his administration. In 2018 the government raided the headquarters of the newspaper Confidencial, led by journalist Carlos Fernando Chamorro, who is considered one of the most prominent critics of Ortega. Then, throughout 2021, authorities arrested seven potential presidential candidates for that year's November elections.

Here's a look at the fraught relationship between the church and the government amid a political standoff that's now in its fifth year, with no end in sight.

Who is Daniel Ortega?

Ortega, 76, is a former guerrilla with the leftist Sandinista National Liberation Front who helped overthrow dictator Anastasio Somoza in 1979 and first served as president from 1985 until he left office in 1990 after being voted out.

He lost three more elections after that before returning to power in 2007. He won a fourth consecutive term in the 2021 ballot, which is widely discredited since he faced no real opposition.

Ortega's opponents regularly compare him to Somoza for his authoritarian tendencies, and also accuse him of dynastic ambitions. His wife, Rosario Murillo, is his powerful vice president.

Under Ortega, Nicaragua has cultivated strong ties to allies Cuba and Venezuela, two staunch foes of the U.S. government. 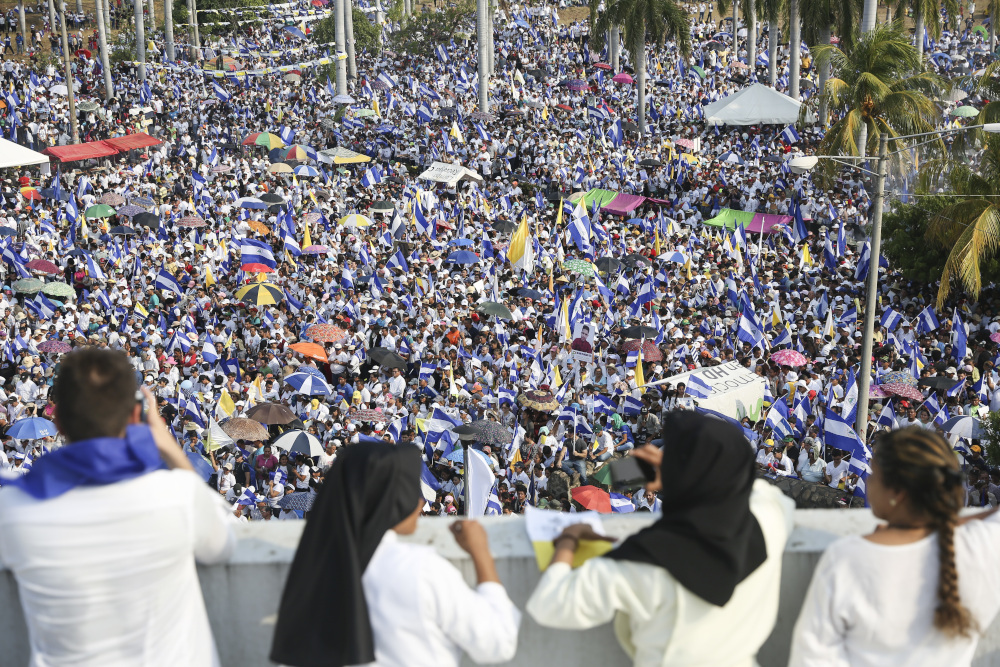 Thousands of people congregate outside Managua's Cathedral during a "Peace and Justice" rally called by the Catholic Church, in Managua, Nicaragua, April 28, 2018. (AP file/Alfredo Zuniga)

How did the unrest begin?

A social security reform in 2018 triggered massive protests backed by businesspeople, Catholic leaders and other sectors. The government's response was a crackdown by security forces and allied civilian militias in which at least 355 people were killed, about 2,000 hurt and 1,600 jailed, according to the Inter-American Commission on Human Rights.

Months before last year's vote, a poll found that support for five opposition candidates put Ortega's re-election in real doubt. Within weeks all five were arrested, along with two other potential candidates. Authorities accused them of responsibility for the 2018 unrest, saying it was tantamount to a "terrorist coup" attempt purportedly backed by Washington.

"Ortega decided to suppress any possibility of losing. ... And that meant arresting everyone," political analyst Oscar Rene Vargas told The Associated Press back then. 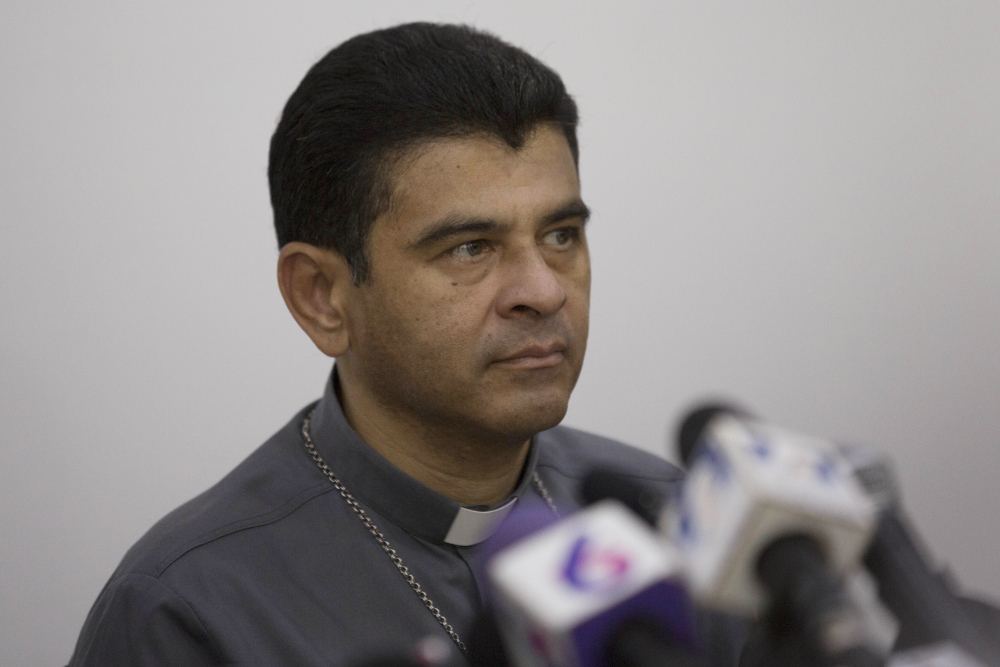 Msgr. Rolando Alvarez, bishop of Matagalpa, attends a press conference regarding the Roman Catholic Church's agreeing to act as "mediator and witness" in a national dialogue between members of civil society and the government in Managua, Nicaragua, May 3, 2018. (AP file/Moises Castillo)

What role has the church played?

Nicaragua is predominantly Catholic, and the church was close to the Somozas from the 1930s until the 1970s, when it distanced itself from politics after many abuses were attributed to the dictatorship. The church initially supported the Sandinistas after Somoza's ouster, but that relationship frayed over time due to ideological differences. Under Ortega, Catholic leaders have often backed the country's conservative elite.

When the protests first erupted, Ortega asked the church to serve as mediator in peace talks, though they ultimately failed.

The Nicaraguan church has been notably sympathetic toward the protesters and their cause. In April 2018, Managua's cathedral sheltered student demonstrators and was a place for collecting food and money to support them.

Figures such as Cardinal Leopoldo Brenes and Managua Auxiliary Bishop Silvio Báez have been outspoken in rejecting violence. Brenes called the demonstrations justified, and Báez rejected any political decision that would harm the people. Báez left the country in 2019 at the Vatican's request, a transfer that was lamented by the opposition and celebrated by the ruling Sandinistas.

Ortega has responded by accusing some bishops of being part of a plot to overthrow him and calling them "terrorists."

In March the papal nuncio in Managua, Msgr. Waldemar Stanislaw Sommertag, who participated as a mediator and lobbied for the release of jailed government opponents, was forced by Ortega's administration to leave the country in what the Vatican called an "unjustified decision." 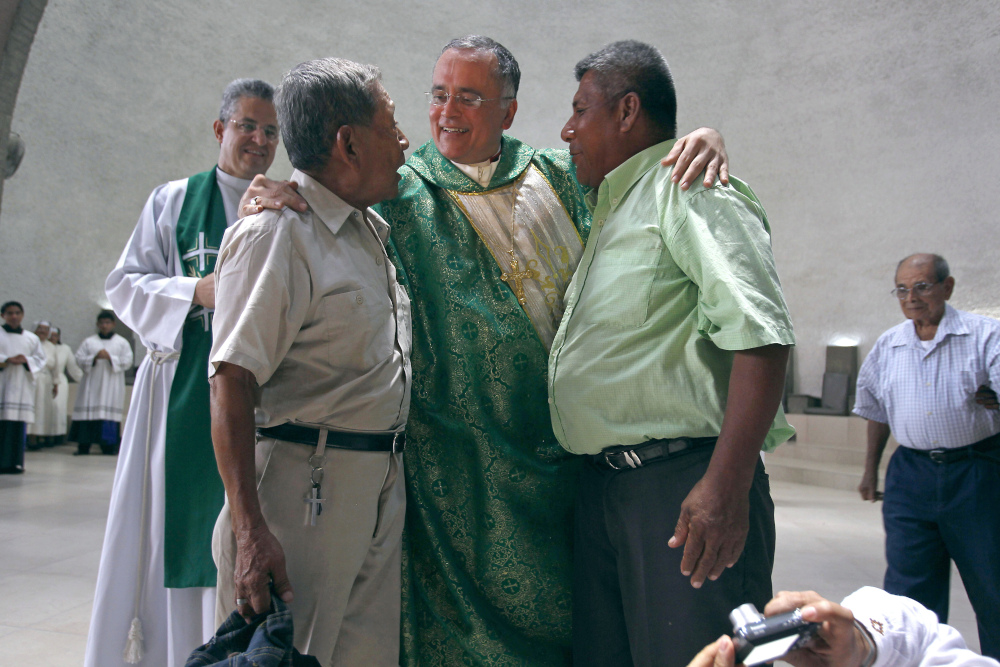 Msgr. Silvio Baez, center, auxiliary bishop of the Archdiocese of Managua, embraces members of the National Elderly Union, in the Metropolitan Cathedral in Managua, Nicaragua, June 23, 2013. Baez left the country in 2019 at the Vatican's request, a transfer that was lamented by the opposition and celebrated by the ruling Sandinistas. (AP file/Esteban Felix)

What about the latest church-state conflict?

The church radio stations were shuttered by the government Aug. 1, and police investigating Álvarez, the Matagalpa bishop, accused him of "organizing violent groups."

Álvarez has called for profound electoral reform to "effectively achieve the democratization of the country" and also demanded the release of some 190 people he considers political prisoners. Last month he staged a fast in protest of what he called persecution against him.

Since Aug. 3, authorities have confined Álvarez to the episcopal complex where he lives. After six days without making public statements, he reappeared Thursday in a live social media broadcast at a Mass, accompanied by six priests and four lay people who are also unable to leave the complex.

The Archdiocese of Managua has expressed support for Álvarez. The conference of Latin American Catholic bishops decried what it called a "siege" of priests and bishops, the expulsion of members of religious communities and "constant harassment" targeting the Nicaraguan people and church.

On Aug. 13, hundreds of Nicaraguans attended a Mass under a heavy police presence after the government prohibited a religious procession in Managua.

Church leaders announced a day earlier that the National Police had banned the planned procession for Our Lady of Fatima for reasons of "internal security." Instead, the church called the faithful to come peacefully to the cathedral. 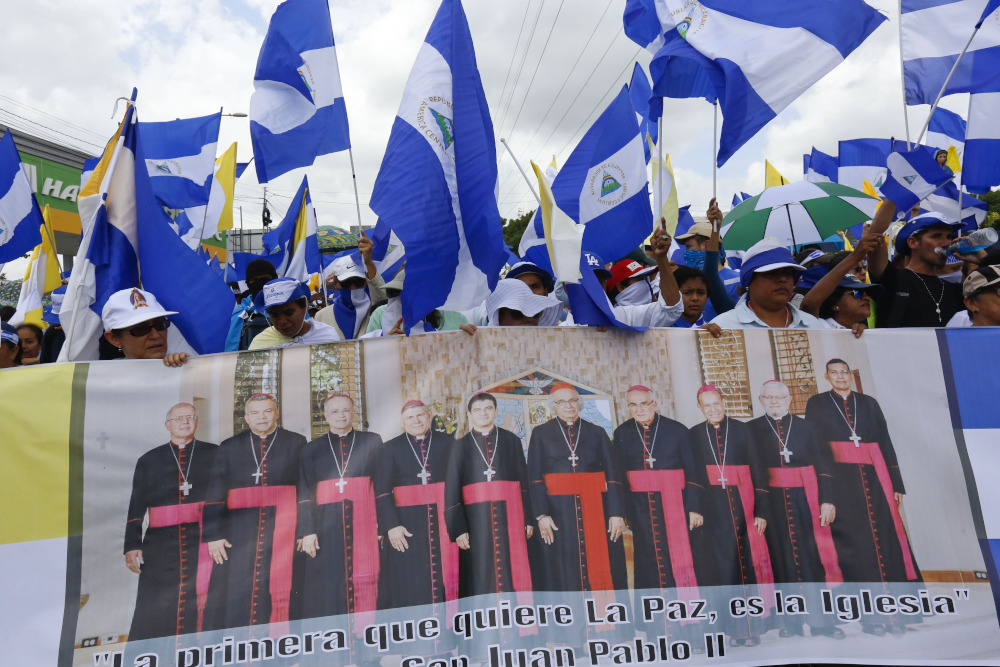 Anti-government demonstrators hold a banner featuring a group of Catholic cardinals including Nicaraguan Leopoldo Brenes, center right, and a quote from John Paul II that reads in Spanish, "The Church is the first to want peace!", during a march supporting the Catholic Church, in Managua, Nicaragua, July 28, 2018. (AP file/Alfredo Zuniga)

Has there been any response from the Vatican?

For almost two weeks, the Vatican was publicly silent about the investigation of Álvarez. The silence drew criticism from some Latin American human rights activists and intellectuals.

On Aug. 12, Monsignor Juan Antonio Cruz, the Vatican's permanent observer to the Organization of American States, expressed concern about the situation and asked both parties to "seek ways of understanding."

Cruz's remarks came during a special session of OAS in which its Permanent Council approved a resolution condemning Ortega's government for the "harassment" and "arbitrary restrictions imposed on religious organizations and those that criticize the government."

Cruz said the Holy See wishes to "collaborate with those who are committed to dialogue as an indispensable instrument of democracy and guarantor of a more humane and fraternal civilization."

[Associated Press writers Nicole Winfield at the Vatican and Christopher Sherman in Mexico City contributed to this report.]