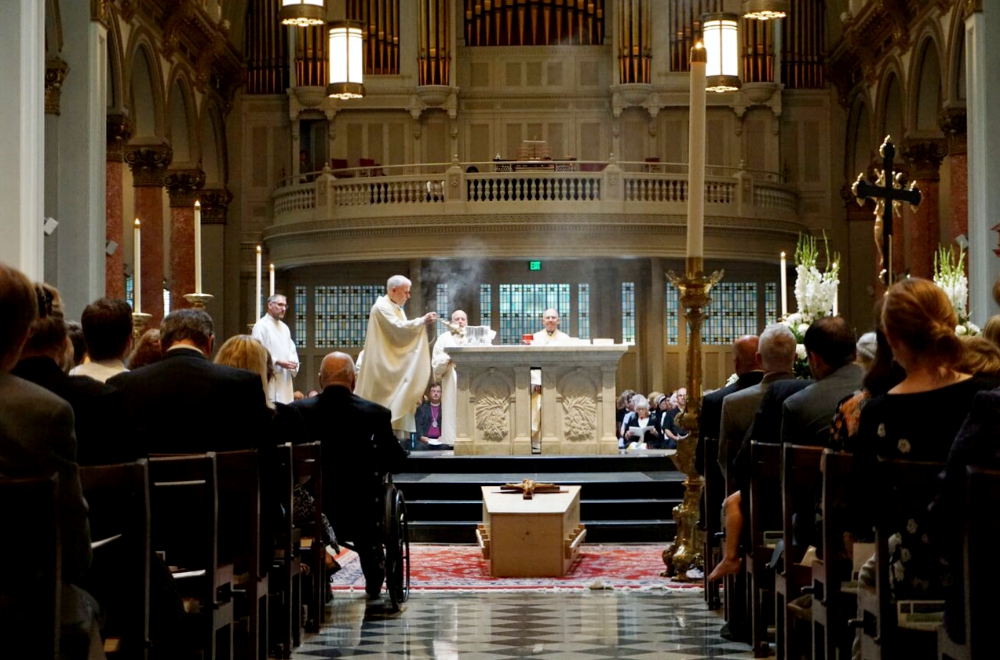 The late Archbishop Raymond "Dutch" Hunthausen's  place in church and U.S. history will be tied to his steadfast opposition to nuclear weapons; to his outreach to LGBT, divorced and marginalized people; and to tensions with the Vatican that led to diminution of his episcopal authority.

However, the portrait of the man that emerged from farewell rites filling cathedrals in Helena, Montana, and Seattle was one of a humble spiritual leader dedicated to prayer and the people of God. 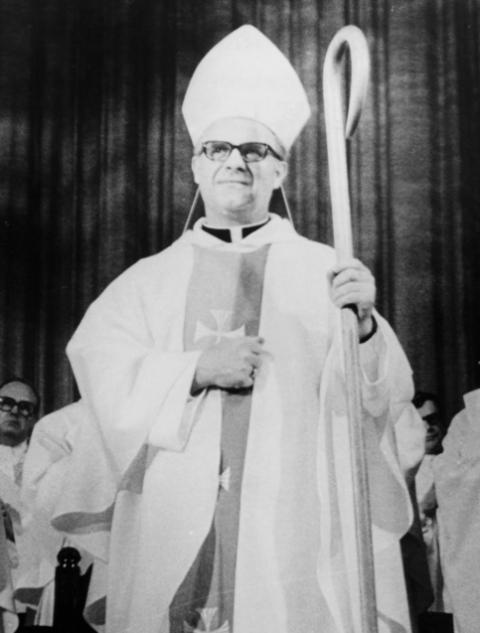 A longtime Hunthausen friend, co-worker and confidant, Ryan noted the similarities of the late prelate's first official public moments as Seattle's archbishop and those of the newly elected Pope Francis.

"When he stepped up to the podium on the stage of the Civic Auditorium," Ryan said, "Seattle's new archbishop paused briefly and asked an overflowing crowd to join him in some moments of quiet prayer, asking the Holy Spirit to inspire him in what he was about to say. In the long silence that followed, you could have heard a pin drop, and I remember thinking to myself: 'This is new!' And it was."

"Here was a bishop who thought the people might have some say in what he was about to say — the people and their prayer," Ryan said.

"That moment long ago reminds me of a memorable moment in March of 2013, when the newly elected Pope Francis stood on the balcony of St. Peter's, humbly bowed his head, and asked the whole world to pray for him and to bless him."

Hunthausen died July 22 — a month short of his 97th birthday — in Helena, Montana, where he had lived since stepping down as Seattle archbishop in 1991, five years before it was required by church law to submit his resignation at age 75.

His body lay in state during the afternoon of July 31 in an open, simple wood casket crafted locally.

Ryan's anecdotes about Hunthausen touched on the major aspects of his high-profile 16 years as Seattle archbishop, including the Vatican visitation in the mid-1980s.

"The Seattle visitation was front-page news around the country and the bishops of the country were assembling for their November meeting in Washington, D.C.," Ryan reminded the congregation, which clearly exceeded St. James' roughly 1,250 seating capacity.

"The stakes were high," Ryan continued. "After several years of a wearying, dispiriting hanging-out-to-dry of this local church and its archbishop, matters had come to a head. At the highest levels, the archbishop's leadership had been called into question and he was no longer considered capable of leading this church by himself. The people, however — religious, priests, deacons, lay — most of the people saw it differently. They loved their archbishop, supported and revered him, believed in him. It was a tense time and a terrible time."

Ryan, who served as vocations director, chancellor and vicar general under Hunthausen, accompanied the archbishop to the meeting. The priest described how, during a flight change in Chicago, a man who had been sitting in front of them "turned around abruptly and thrust a piece of paper into the archbishop's hand. 'Here!' was all he said, but he said it with as angry and hostile an expression on his face as I'd ever seen."

Smiling, Hunthausen extended his hand to the antagonist and asked if they knew one another.

"There was no answer and no hand was returned. There was only a handwritten page filled with venom and vitriol and a devastatingly personal attack on the archbishop," Ryan said.

Hunthausen "quietly folded up the note, put it in his pocket, and remarked to us, as the fellow disappeared into the crowd, 'Oh, I wish we could sit down and get to know each other. Maybe we'd come to understand each other and be friends.' "

Ryan called the story "vintage Raymond Hunthausen" and linked it to the beatitude "Blessed are you when they insult you and persecute you and utter every kind of evil against you falsely because of me."

"He was never one to judge, always one to think the best of another, no matter what. His passion for peace and his reputation as a courageous prophet of peace flowed out of who he was as a person — a grounded, holy, happy, perfectly-put-together, incredibly authentic person who never preached a word that he didn't first live."

Hunthausen's equanimity under stress was also emphasized during both the vigil rite the evening before the funeral Mass and in a July 27 memorial Mass for the former bishop of Helena (1962-75) at that diocese's Cathedral of St. Helena.

Among life lessons taught by Hunthausen was to "avoid bitterness, resentment and cynicism at all cost, and never get in the way of the Holy Spirit, who guides the church in spite of our best efforts or human foibles," said Las Vegas Bishop George Thomas in his Helena homily.

Hunthausen "confirmed me as a junior high boy in this cathedral," shared Thomas, who is the immediate former bishop of Helena, appointed to Las Vegas in February.

"In late April, just days before my departure to the Diocese of Las Vegas, I had a tender and tearful visit with Archbishop Hunthausen at his residence just east of Helena," Thomas told listeners. "He was in rare form that day — lucid and interactive, and the conversation was lively, with intermittent bouts of laughter and melancholy. Each of us knew in our hearts that this was likely to be the last time we would be together this side of the grave.

"As I took leave of the archbishop's room, he called me back one more time," Thomas said. " 'Please promise you'll come back to Helena to celebrate my memorial Mass. It would mean the world to me.' I'm here today to make good on that promise."

"Even in some of the more difficult moments of relationships and situations within the church, I never picked up from him a trace of bitterness or cynicism," said Skylstad, whom Hunthausen had ordained bishop of Yakima, Washington, in 1977, where Skylstad served until being named to Spokane in 1990.

"This was a journey of faith and the cross, and somehow with all of the hurt and pain, the vision what could be was always there. Humility for him and for all of us is to embrace the cross and with vision look beyond the empty tomb. He saw everyone as a brother and sister in Christ and lived accordingly," said Skylstad. 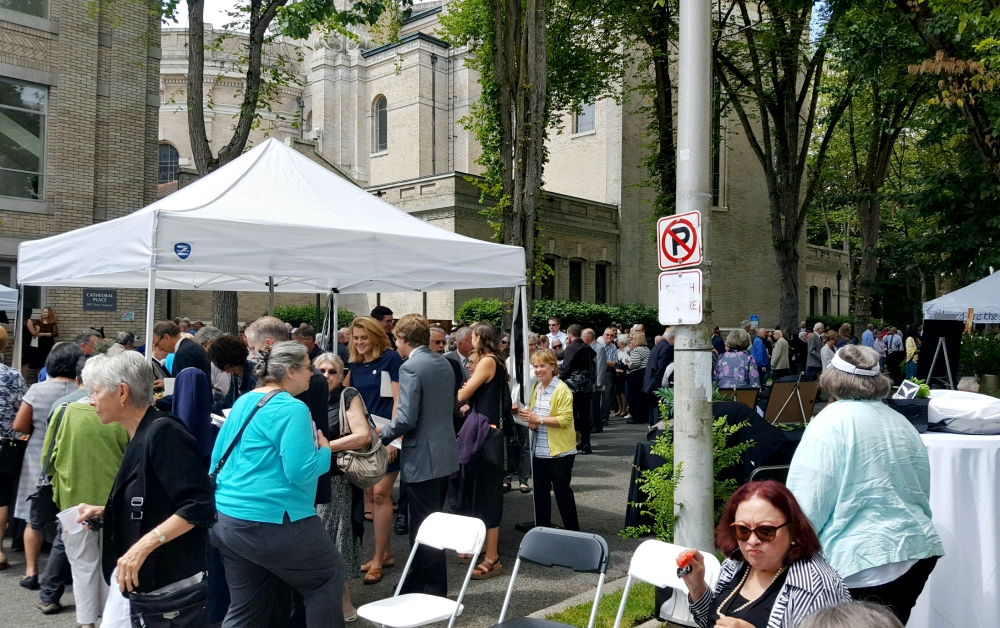 Hundreds of persons who attended the Aug. 1 funeral for Seattle's retired Archbishop Raymond Hunthausen at St. James Cathedral join a following reception on a blocked-off city street behind the church. (NCR photo/Dan Morris-Young)

Skylstad, Thomas and Ryan all pointed to the profound impact the Second Vatican Council (1962-65) had on Hunthausen, and spoke of his commitment to social justice and the poor, and of his closeness to his large family.

Ryan called the archbishop's nieces and nephews, "to the day he died, the light of his life."

Thomas said he "often witnessed him slip a $20 bill into the hands of a beggar as he walked the busy streets surrounding St. James Cathedral" and described how Hunthausen befriended "a developmentally disabled man named George Kotalaris."

Hunthausen "in his quiet and unassuming way" had "organized a work party" to clean Kotalaris' apartment, Thomas recalled. "George placed a phone call to the local Seattle newspaper. He said to the reporter, 'Guess who's cleaning my toilet!' Within a matter of moments, the newspaper picked up on the story replete with pictures, making the story and the archbishop the talk of the town."

Ryan illustrated the beatitude "Blessed are they who mourn, for they will be comforted" with a description of Hunthausen's reaction in 1945 to the atomic bombing of Hiroshima, Japan, a backdrop to his highly publicized protests of nuclear weapons, notably those carried on Trident submarines based in his archdiocese.

Hunthausen told Ryan there had been "general jubilation" among fellow seminarians when word reached St. Edward Seminary about the bombing, that "the enemy was finally vanquished."

All the young Hunthausen could think about, Ryan said, were "the 70,000 people who had been incinerated in a matter of seconds."

"He shared with me how he went off to the woods for a walk, and then to the chapel, where he buried his head in his hands and wept," Ryan said. 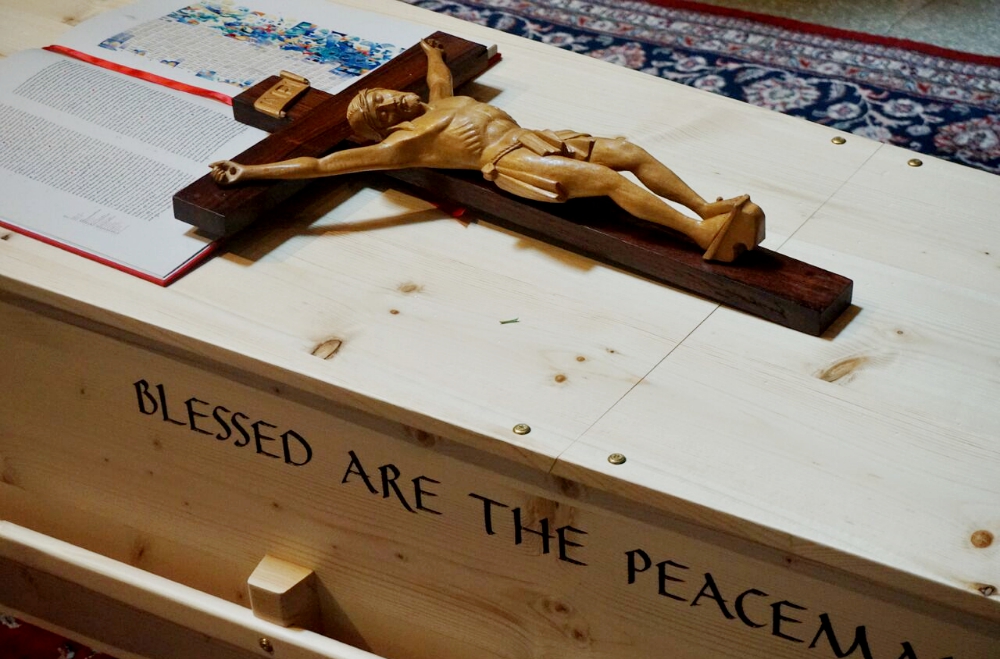 "The last years of his life were spent alongside his brother, Father Jack Hunthausen, at a Helena nursing facility, where they celebrated Mass daily," reported Northwest Catholic, newspaper of the Seattle archdiocese.

According to the story,  a contingent of about 100 family members attended the funeral rite and the archbishop "is survived by his brothers Tony and Jack, both of Helena; his sisters, Sister Edna, of the Sisters of Charity of Leavenworth, and Jean Stergar of Anaconda; and 34 nieces and nephews, 101 great-nieces and -nephews and 64 great-great-nieces and -nephews."

Hunthausen biographer John McCoy, who attended the funeral liturgy, recently wrote in America magazine, "The last time I saw the archbishop he said he wondered why God had him live so long. I suggested that maybe God wanted him to experience Pope Francis, with his emphasis on compassion and justice rather than on law and doctrine.

"The irony is that Archbishop Hunthausen, who was humiliated by the Vatican, did what Francis asks of church leaders today. He lived simply and humbly. He listened and served. And he extended Christ's mercy and love to all, especially the poor, the suffering and the forgotten."

Dutch, dear friend, common you were not, although you surely had the common touch. And you did see further than others. You rose higher than others, acted more boldly than others, and, yes, you took with you the multitude: You took us, and so many others. What a gift you were to us! You taught us — more by who you were than by what you said. You led us, walking alongside us and never lording it over us; you inspired us to be our best selves and never to take shortcuts around the Gospel; and you challenged us to dream great dreams and to believe that nothing is impossible for those who believe. Blessed are you, dear friend. Blessed are you. Yours is the kingdom of heaven!