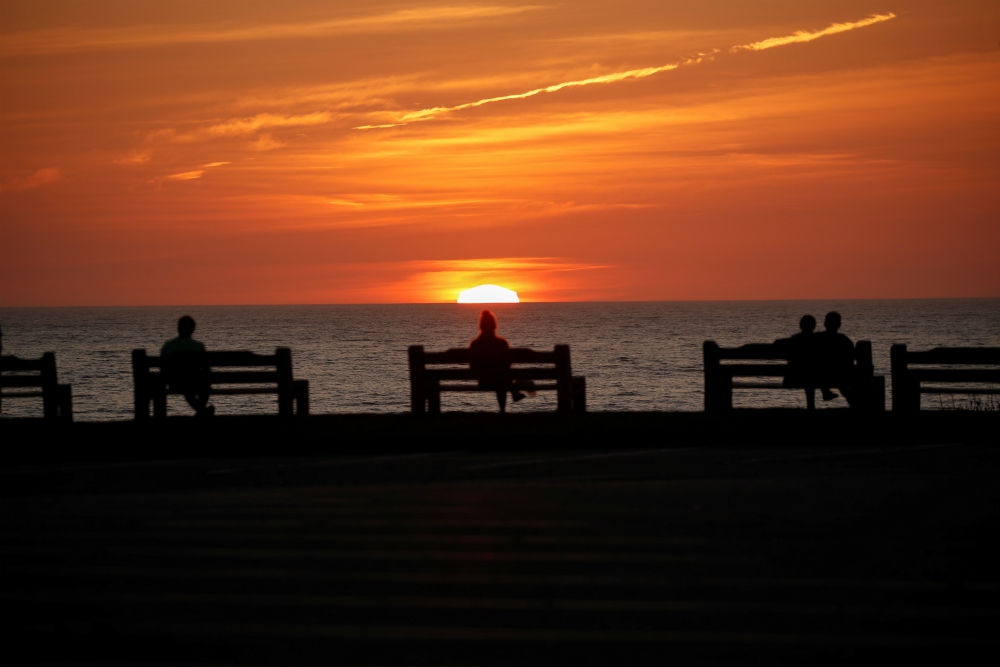 But by the last day of March, on the phone from her home in Honolulu, she discussed how that world is no longer a strange one.

"Millions of Americans are forced to be hermits and live a monastic life," she told NCR. And, during this era of the coronavirus and isolation, many will face what the desert monks of the fourth century described as acedia.

For the ancient monks, acedia was defined as a sense of restlessness, spiritual unease and an urge to escape the harsh routines of monastic life. It was considered a deadly sin, numbing those who succumb to it to access to God's love and the fruits of the spiritual life.

These days, Norris said, much of the world can look toward those ancient monks for inspiration. They survived amid a bleak landscape, sometimes falling into what was described as a noonday torpor, a warning sign for acedia. Norris has a renewed appreciation for what those early monks endured.

"They couldn't stream movies on Netflix," she said. "They were on the frontlines."

The word was prevalent in the fourth century and re-emerged as a concept during the 14th-century European plagues. "It is just as opportunist as a virus. It will start to show up."

Norris immersed herself in the history of monasticism and wrote Acedia & Me: A Marriage, Monks, and a Writer's Life in 2008.

The book came out during the beginning of the Great Recession. Interest in the book was high. Her tour audiences for that work exceeded those of her other spirituality books. When crisis hits the wider society, acedia is sure to increase.

In today's crisis, the experience of isolation can aggravate feelings of acedia, often confused with the more modern description of depression. But there are differences, she said.

In some ways, the crisis has not been a large hardship for her, she emphasized. Norris, a widow for 17 years, is used to living alone. She still takes walks through her hilly neighborhood but misses her gym and swimming time.

"I recognize acedia when it does turn up. Being forced to stay still is a breeding ground," she said. Acedia is a lot like the pandemic: It spreads rapidly through confined quarters.

For some, being forced to spend long hours with family can be hellish. When acedia strikes, it creates an urge to lash out. "It's the feeling of being totally bored and totally restless. It's a horrible combination," said Norris.

Many will now be forced, because of the lack of diversion, to experience acedia, perhaps in a way they haven't before. Norris' book on the subject wrestled with its definition. It is in some ways known by what it is not.

It is not clinical depression. But it is accompanied by sadness, which Norris said comes toward the end of a bout with acedia. She knows the difference, having experienced times of depression. The medieval monks often cited Psalm 91, to describe the feeling of being afflicted by a noonday demon. But it can strike any time, said Norris.

So how do hundreds of millions of newly minted, if reluctant, "monks" cope with the experience?

Norris notes that parents of young children have a different experience, engaged in the work of keeping children busy and learning. Those are the demands that go beyond adult careful planning.

For those who are not caring for children, it helps to establish a daily routine. Monastic living is established with a routine, for a good reason. Times are set aside for morning prayer, mealtimes, afternoon prayer and work.

It's like a scaffolding, akin to the way buildings are kept together, much like our spiritual and emotional lives, she said.

Her other bits of advice: Take a shower and wash your hair every day. Little items of grooming, when neglected, can create a "feeling of 'Why bother?' "

"I provide myself with enough chocolate to keep going," said Norris.

When the demons lurk, Norris suggests prayerful readings of the psalms. Quoting Peter Gomes, the late Harvard chaplain who wrote spirituality bestsellers, the psalms are unsurpassed as spiritual buttresses. They can also be shocking in their reflection of brutal human feeling.

Sometimes they don't connect to a particular experience. Norris suggests to keep reading "until you find a psalm that speaks to your mind. Every human emotion is there."

The psalms speak to varied human emotions, including anger. Psalm 137 even contemplates the smashing of foreign babies of those who enslaved God's people.

That same Psalm 137 talks about the Israelites singing their sacred songs in an alien land, bound to captivity in Babylon. The psalm, she said, "is really useful because it shows what we do to people. It shows us that kind of resentment. It's not alien to the human experience."

Spirituality can suffuse the most mundane of tasks for those forced to stay home and live as hermits. Norris recites the Lord's Prayer while washing her hands. She also suggests listening to music, really listening, not as background noise for other activities. Actor Patrick Stewart's Shakespeare recitations is another hobby.

She suggests taking opportunities not to be totally self-absorbed.

She makes a point of thanking her postal deliverer for working during the pandemic. She connects via social media to her 4- and 6-year-old nieces, who tell her jokes, often bad ones. Such little interactions are a way of moving out of self-absorption.

Norris suspects the pandemic will not be an easy time as a vibrant society learns the art of quiet and reflection. It will be a forced lesson in many cases. "There is no place to run to. That is one of the hardest things for us."

The desert monks were aware of the temptation to flee. When one of their number would flee to Alexandria for some urban pleasures, the older monks would counsel that the community welcome him back. They recognized the temptation.

She worries about the isolation of older people, especially those in nursing homes, in the current crisis. Many are forced to eat their meals alone, in their rooms. That is a debilitating experience, said Norris, who notes that eating meals outside the community was considered punishment in monastic life.

Acedia, familiar to the ancient Christians, can feel like a nebulous concept to their modern counterparts. But it's the kind of thing recognized when it happens.

"Most people wouldn't know the word," acknowledged Norris. "It isn't just depression. It isn't just boredom. It's a lot of things." A world thrust into monastic life is now forced to know what the ancient monks recognized as a spiritual virus.

This story appears in the Coronavirus feature series. View the full series.
A version of this story appeared in the April 17-30, 2020 print issue under the headline: Feeling antsy? Morose? Kathleen Norris offers tips to cope with acedia.