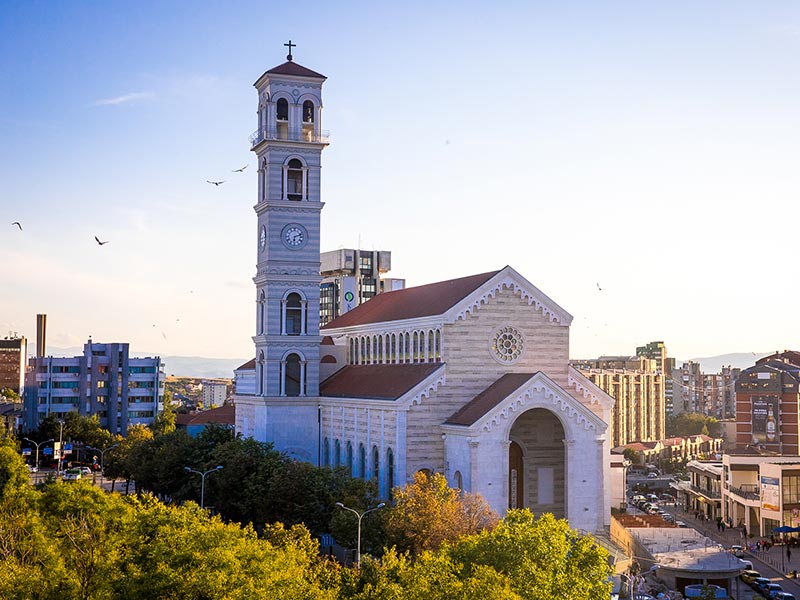 View of the Mother Teresa Cathedral in downtown Pristina, the tallest building in Kosovo, also known as the Sanctuary of Mother Teresa. (Valerie Plesch)

Twenty years after the death of St. Teresa of Calcutta, thousands of Christians and Muslims came together to celebrate the consecration, in her name, of this nation's first Roman Catholic cathedral.

St. Teresa Cathedral is also the only one in the world dedicated to the Albanian saint, who spent most of her life working in the slums of India.

The consecration Tuesday (Sept. 5), which falls on the one-year anniversary of her canonization in Rome, was long-awaited by the small but active Catholic community in Kosovo.

The mostly Muslim Balkan state declared its independence from Serbia almost a decade after St. Teresa — still often referred to as Mother Teresa — died in 1997.

Most Kosovars are Albanian — as St. Teresa was — and the Catholics among them have especially anticipated the completion and blessing of the cathedral.

"It is special for every Catholic in Kosovo and the region," said Bardhe Cetta, 39, a member of the choir that sang at the consecration and one of 5,000 people who attended the ceremony. “It’s not the first time that we are singing in (this) church but this time it is something special. So for me, today is a big day.”

Although the Holy See still does not recognize Kosovo's 2008 independence from Serbia, Pope Francis appointed the 88-year-old Fr. Ernest Troshani Simoni as his special envoy to lead the ceremony, attended by local Catholic bishops, ambassadors, soldiers from NATO's peacekeeping force and other dignitaries as well as the faithful.

Simoni, an Albanian priest, survived nearly 30 years of torture while in labor camps under the communist dictatorship of Enver Hoxha. The priest was twice sentenced to death at a time when the government banned practicing religion. In 2016, Pope Francis named Simoni as Albania’s new cardinal.

Simoni told the audience it was a special honor to be at the sanctuary.

"It was a great joy for me when I heard from the pope that I personally would come to Pristina, to send my heartfelt congratulations to the Kosovar-Albanian brothers, and that the Lord's blessing be in the hearts of all Kosovars,” Simoni said.

For over two hours, priests and bishops from the region participated in a holy Mass as part of the consecration ceremonies. Priests blessed different areas of the cathedral with oil, including a newly mounted wall sculpture of St. Teresa and a stone altar. Kosovo’s president, Hashim Thaci, who is Muslim, gave a speech.

Though Kosovo's estimated 65,000 ​Catholics represent a small fraction of the ​nation's predominantly Muslim population of 1.8 million, their faith has strong roots in the region.

When the Ottoman Empire — historically centered in Istanbul – ruled Kosovo from the early 15th century until 1912, most Albanians converted to Islam. But some Catholics remained. Mother Teresa was born in 1910 in Skopje, Macedonia, which at the time was the capital of the Ottoman Turkish province of Kosovo. Her parents were Albanian.

“We need to reclaim the centuries because, since the arrival of the Ottomans, hundreds of churches and cathedrals were destroyed,” said Fr. Lush Gjergji, the general vicar of Kosovo’s Catholic diocese and also Mother Teresa’s close friend and biographer.

He noted that only one church from before the 1500s exists today in Kosovo. “When Kosovo was all Catholic, we had more than 10 cathedrals.”

Now there are 40 churches and 24 parishes throughout Kosovo, and one cathedral.

Straddling the intersection of Bill Clinton Street and George Bush Street in the heart of Pristina, the new sanctuary is Kosovo’s tallest building, with its 250-foot bell tower offering 360-degree views of the capital.

It opened its doors to the public in 2010, though the foundation for the cathedral was ceremonially laid in 2005 by Kosovo’s then-president, Ibrahim Rugova. Since then, the diocese has struggled to finish construction.

Funds to help build the cathedral came from donations, particularly from the widespread Albanian diaspora. Fundraising events include an annual golf event in New York organized by an Albanian church.

"We wanted Kosovo to have a cathedral because Catholics are a small number here," said Sara Rodiqi, a 20-year-old architecture student and volunteer at the consecration. 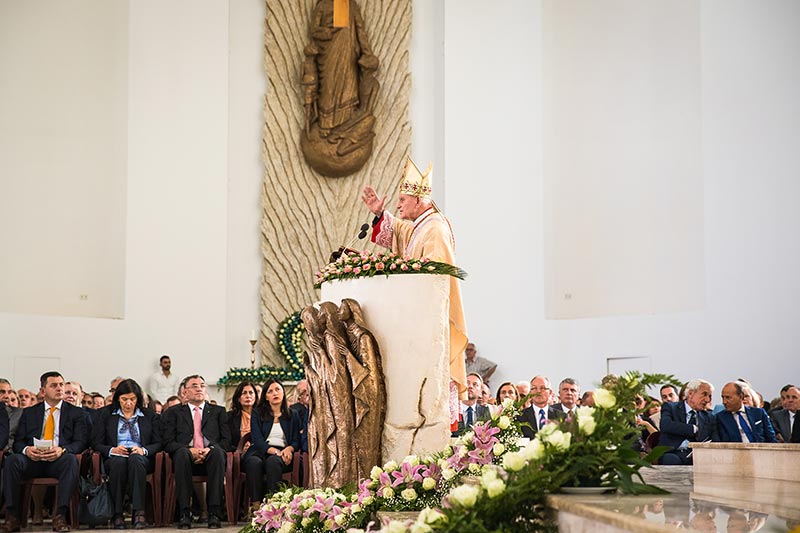 "Having a cathedral in the center of the city means a lot to the people of Kosovo, and especially to the Catholics. It's a wonderful feeling."

Locals said that while the sanctuary will be deeply important to Kosovar Catholics, it would resonate outside the country, too.

“It is a cathedral and a sanctuary for the whole world,” said Gjergji, who has written 15 books about the nun whose name became nearly synonymous with charity.

The cathedral is also expected to help the economy of Kosovo, one of the poorest countries in Europe. Opera Romana Pellegrinaggi, a papal agency, is likely to add Kosovo to its list of official world pilgrimage sites.

Some Kosovar Catholics said that although the building is perhaps fancier than what Mother Teresa would have approved of, they insist they are preserving her call to duty to help the needy, including offering daily hot meals to the poor at a smaller church in Pristina.

“The sanctuary will function the same way, not only with an open door but also with an open heart for everyone,” said Gjergji. “We hope that this place will transform into a school of life and love.”