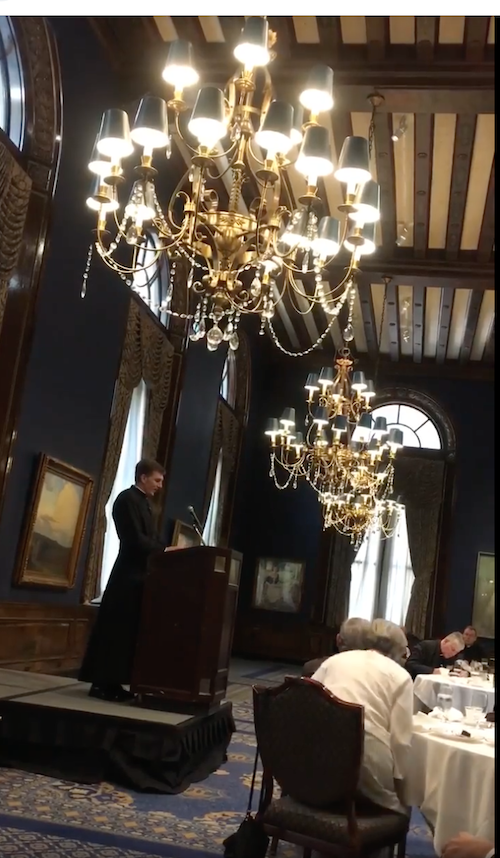 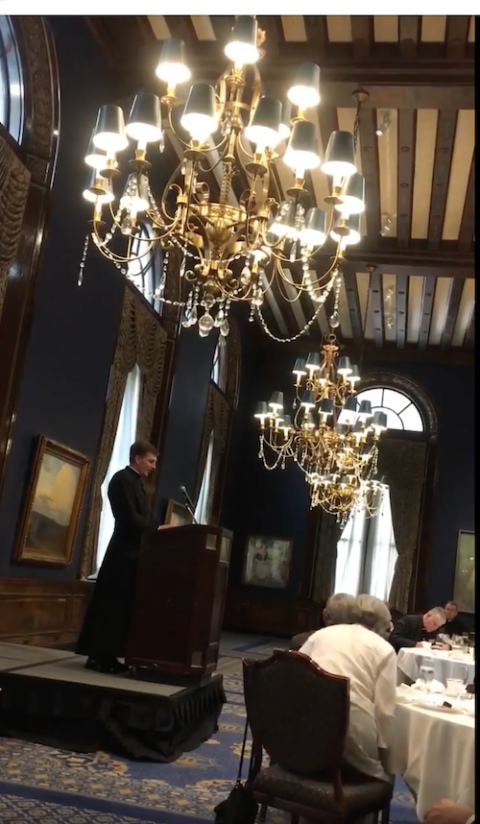 A Wisconsin Catholic priest, whose viral video claimed "you cannot be Catholic and be a Democrat," continued his campaign in Chicago this month with a speech at one of the city's tony clubs, where he appeared to violate quarantine orders and addressed an indoor crowd, with at least some of the people not wearing masks.

"What person worthy to be called American has a problem with making America great again?" asked Fr. James Altman to an audience failing to comply with the city's guidelines, as he made his case that Catholic must vote for President Donald Trump over former Vice President Joe Biden. "This actually is a crucial time in history where Catholics better get it right. And the shepherds better be getting it right," he said of the U.S. bishops.

Altman, a priest of the diocese of La Crosse, Wisconsin, has become an internet sensation among right-wing Catholics over the past two months following the release of a 10-minute video in August with the frequently quoted line: "Here is a memo to clueless baptized Catholics out there: You cannot be Catholic and be a Democrat. Period." He also repeatedly denigrated Archbishop Wilton Gregory of Washington, D.C., and slurred migrants.

The video was then endorsed and shared by Bishop Joseph Strickland of Tyler, Texas, and Altman has gone on to promote his video and message on right-wing sites such as Church Militant and with YouTube activist and Catholics for Trump advisor Taylor Marshall.

Altman's appearance in Chicago was sponsored by the group Catholic Citizens of Illinois, which was founded to address "American culture and public policy from a perspective formed in strict fidelity to Holy Scripture, Sacred Tradition and the Magisterium of the Catholic Church," according to the group's website.

The Oct. 9 luncheon event was described on the group's website as "sold out."

Altman repeated many of the talking points from his original video during his 50-minute speech at the Union League Club of Chicago that included meandering commentary on school prayer, same-sex marriage, Hillary Clinton's emails, the "Russian collusion hoax" and the ongoing confirmation process for Judge Amy Coney Barrett, recently nominated by Trump to the Supreme Court.

"It is time to make our courts great again," said Altman.

Altman slammed the U.S. Catholic bishops and their "very left-wing USCCB voting guide," in reference to the official voting guide known as "Forming Consciences for Faithful Citizenship" produced by the U.S. Conference of Catholic Bishops.

He went on to claim that many bishops come from U.S. seminaries plagued by the "vice of promiscuity" among seminarians, priests, bishops and cardinals, saying that the majority of them are led by "liberal and unorthodox" leaders. He also criticized U.S. church leaders for suspending public Masses during the pandemic, saying there are "so few masculine and manly fighters" willing to stand up to the government.

At least two priests in clerical garb can be observed in attendance at the event in the video footage obtained by NCR.

During his talk, which took place after lunch, Altman's audience did not appear to wear masks, despite guidelines from the city of Chicago that state that dining patrons "must always wear face coverings while seated, except when actively eating or drinking."

Mary Anne Hackett, president of the Catholic Citizens of Illinois, told NCR by phone that 100 people attended the event.

"We're restricted to 50 people in a room with masks and all that jazz, and we had two rooms," she said. When asked about mask compliance, she said there was no announcement asking attendees to wear them during the talk.

"We were sitting at tables and having lunch, and then he spoke," she said. "Were we supposed to put our masks on after that?"

The public health office of the City of Chicago told NCR in an email that while they could not comment on ongoing investigations or specific cases, "individuals are required to wear a face covering at all times in any outdoor and indoor common areas, or where 6-foot distancing is not possible." 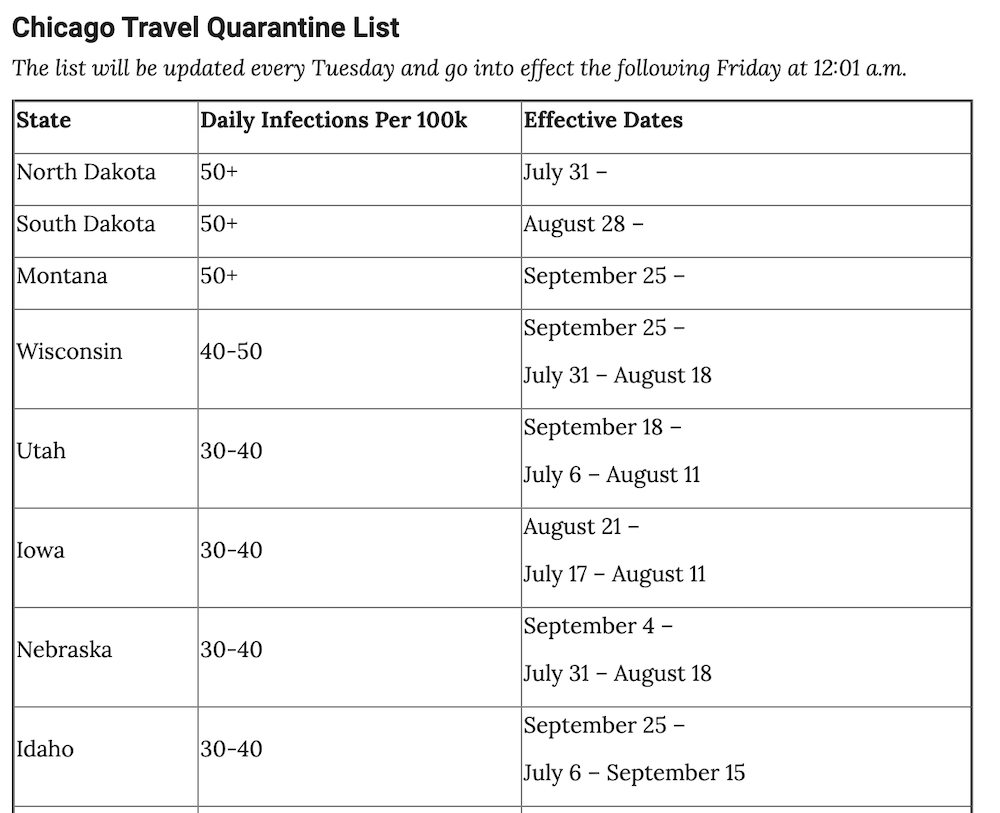 Hackett said she was unaware of the city's requirement that visitors from certain states must observe a mandatory 14-day quarantine period, including those from Wisconsin where Altman is in ministry and where the state is currently experiencing one of the highest COVID-19 positivity rates in the country.

Altman did not respond to NCR's request for comment to confirm whether he observed the required two-week quarantine in Chicago prior to his talk.

Hackett said the event was advertised among the organization's members but declined to state how much guests paid to attend the luncheon.

"He's a very popular priest," she said. "People wanted to hear him," she added before refusing to answer further questions and hanging up.

The Chicago Archdiocese told NCR that they were not informed of the event before it took place.

"Neither was the archdiocese provided a copy or an outline of Fr. Altman's opinions as delivered at the Union League Club," the archdiocese said in a statement. "The group referring to itself as 'Catholic Citizens of Illinois' is not an officially recognized organization of the Catholic Church. As the archdiocese has maintained from the beginning of the COVID-19 crisis, we are called to be our brothers' and sisters' keepers."

The statement continued: "In the context of a deadly pandemic, that means strictly following state and municipal public-health guidance, including practicing social distancing and wearing masks. We have published this guidance to our website and repeatedly communicated it to all clergy, ministers and archdiocesan employees. We are responsible for one another, brothers and sisters all."

The Union League Club of Chicago said that they could not comment on the specifics of the event and the behavior of attendees but said the club was in adherence with all legal requirements. 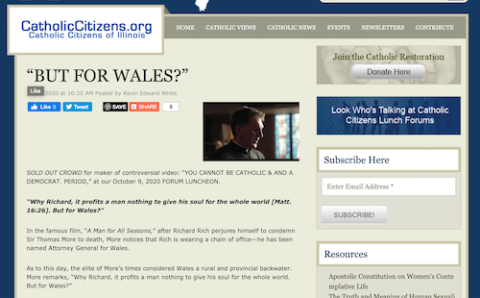 "We comply with all city and State guidelines, we have temperatures taken upon entry, we have signage throughout the clubhouse requiring masks be worn at all times, we outline contact tracing with members and guests and do our best to enforce the rules with all," wrote Jared Wike, director of marketing and communications for the club, in an email to NCR.

Following Atlman's initial video, Bishop William Patrick Callahan of La Crosse issued a statement saying that it "comes off as angry and judgmental, lacking any charity and in a way that causes scandal both in the Church and in society."

"Canonical penalties are not far away if my attempts at fraternal correction do not work," he warned.

Since that time, Altman has continued to regularly celebrate Mass at his parish as well as to grant interviews to traditionalist Catholic websites and personalities, using the same incendiary claims from his August video.

NCR did not receive a reply from the La Crosse Diocese when asking whether Callahan approved of Altman's Chicago talk and whether the priest remained in good standing with the diocese.