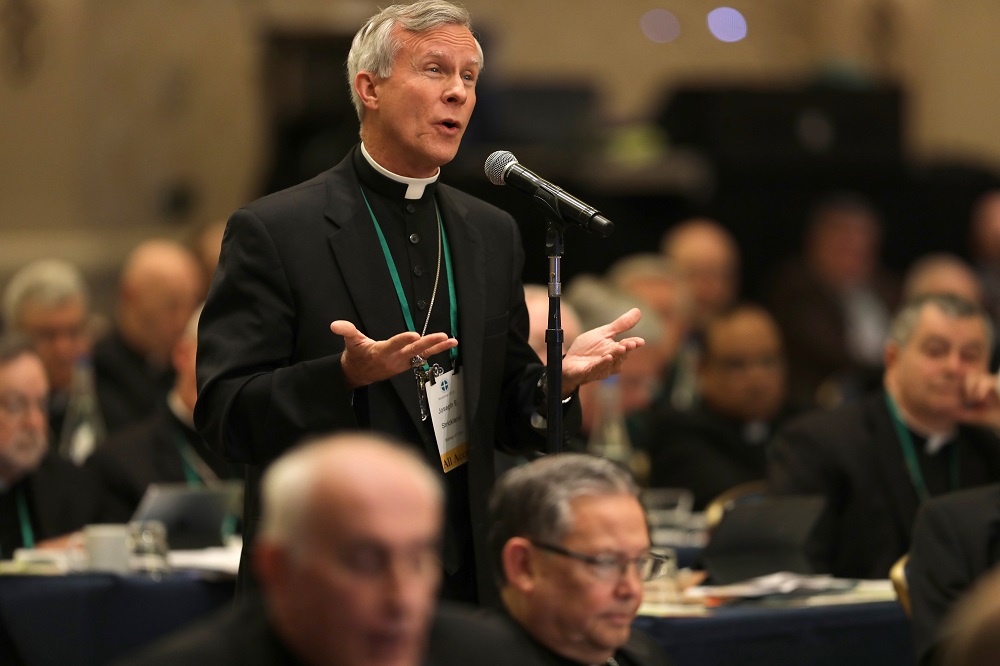 Bishop Joseph Strickland of Tyler, Texas, speaks from the floor during the fall general assembly of the U.S. Conference of Catholic Bishops in Baltimore Nov. 11, 2019. (CNS/Bob Roller)

Bishop Joseph Strickland of Tyler, Texas, has endorsed a video that includes anti-immigrant remarks and homophobic slurs by a priest of Wisconsin in which the priest claims, "You cannot be Catholic and be a Democrat."

The video was released Aug. 30 by Fr. James Altman, pastor of St. James the Less Catholic Church in La Crosse, Wisconsin, and has since received more than 298,000 views.

In the 10-minute video, set to ominous music and dark lighting, the priest slams Archbishop Wilton Gregory of Washington D.C., for his criticism of President Donald Trump's photo-op and appearance at the St. John Paul II National Shrine earlier this summer. He also criticizes Jesuit Fr. James Martin and his closing prayer at the Democratic National Convention; refers to participants in the Deferred Action for Childhood Arrivals program, which protects immigrants who entered the United States as minors from deportation, as "criminal illegal aliens"; and calls climate change a hoax.

The Diocese of La Crosse, Wisconsin, did not immediately respond to NCR's request for comment on Altman and the video.

On Sept. 5, however, Strickland took to Twitter to share the video and thank Altman for his "courage."

"If you love Jesus & His Church & this nation...pleases [sic] HEED THIS MESSAGE," wrote Strickland. In less than 24 hours, the bishop's Tweet endorsing the video had been shared more than 1,000 times and liked by more than 2,600 viewers.

In referencing Martin’s participation at the Democratic convention last month, Altman labeled the Jesuit priest a “a hyper, confusing spreading heretic” who was a “premier speaker” at the convention.

In fact, Martin, who is known for promoting LGBTQ inclusion within the Catholic Church, did not speak and instead offered a prayer that included petitions for “the LGBT teen who is bullied” and “the unborn child in the womb,” among other vulnerable and marginalized groups.

“I guess it’s okay for James Martin to spout out for the Democrats on their national stage but God forbid a priest speak out against their godless platform,” said Altman. “Here is a memo to clueless baptized Catholics out there: You cannot be Catholic and be a Democrat. Period.”

“The party platform absolutely is against everything the Catholic Church teaches, so just quit pretending that you’re Catholic and vote Democrat,” he continued. “Repent of your support of that party and its platform or face the fires of hell.”

Despite Martin’s work with the LGBTQ community having been encouraged by Pope Francis, Altman slurred Martin, saying he was allowed to “prance up on to the Democrats’ national stage.”

In addition to Martin, Altman singled out Gregory for his rebuke of the St. John Paul II National Shrine, which is owned and operated by the Knights of Columbus, for hosting Trump the day after he used tear gas to clear peaceful protesters for a photo-op in front of St. John’s Episcopal Church in June.

Altman criticized Gregory, who is the first African American archbishop in the nation’s capital, for what he labeled as his “horrific attack on the one best pro-life president and his Catholic wife” and for supporting the Black Lives Matter movement, whose protesters Altman characterized as “Marxists.”

Altman's latest video does not mark the first time he has singled out Gregory. In an earlier video posted on June 4, he used his Sunday homily at Mass to criticize Gregory for protesting Trumps' visit to the shrine and accused him of "confusing" faithful Catholics. That video has now received more than half a million views.

With less than two months until the presidential election, Altman attempted to argue that it was impossible for Catholics to vote for Democrats due to the party's platform allowing for legal abortion.

"There will be 60 million and counting aborted babies standing at the gates of Heaven barring your Democrat entrance and nothing you can say will ever excuse you for your direct or indirect support of that diabolical agenda," he said.

Altman went on to ask viewers how many Catholics voted for President Barack Obama in 2008 and 2012 and said the answer was "zero," implying that it was impossible to be a faithful Catholic and vote for Obama. In fact, Obama won the Catholic vote in both elections.

Throughout the video, Altman slammed U.S. bishops as "gutless cowards" and part of a "conspiracy of fear," unwilling to have the courage to out Catholics who support Democratic candidates.

Even so, in recent months, the faith of Democratic presidential candidate, former Vice President Joe Biden, has promoted controversial commentary from several Catholic bishops questioning the sincerity of his Catholicism.

In August, Bishop Thomas Tobin of Providence, Rhode Island, tweeted: "Biden-Harris. First time in awhile [sic] that the Democratic ticket hasn’t had a Catholic on it. Sad."

In a series of tweets on Sept. 1, Bishop Richard Stika of Knoxville, Tennessee, seemed to imply that Biden was not a faithful Catholic, writing, "It really confuses me that both Joe Biden and Nancy Pelosi time and time again state that they are faithful Catholics and yet promote unlimited abortion as well as deny so many of the teachings of our faith."

Altman’s video has stirred controversy on the internet among Catholics both supporting his letter and demanding his diocese rebuke him. The social justice organization Faithful America has launched an online petition calling the video "angry" and "misleading." By contrast, right-wing Catholic internet commentator Taylor Marshall has released a video calling Altman a "hero."

As for Strickland, who in recent years has emerged as one of the most partisan members of the U.S. hierarchy, endorsement of Altman's video does not mark his first foray into promoting fringe or extremist clerics.

In 2018, when a former papal nuncio to the U.S., Archbishop Carlo Maria Viganò, issued a letter against Pope Francis charging that he mishandled clergy abuse claims and called for the pope’s resignation, Strickland issued his own letter saying he found Viganò to be credible and asked his priests to read his letter in all Sunday Masses that week in August 2018.