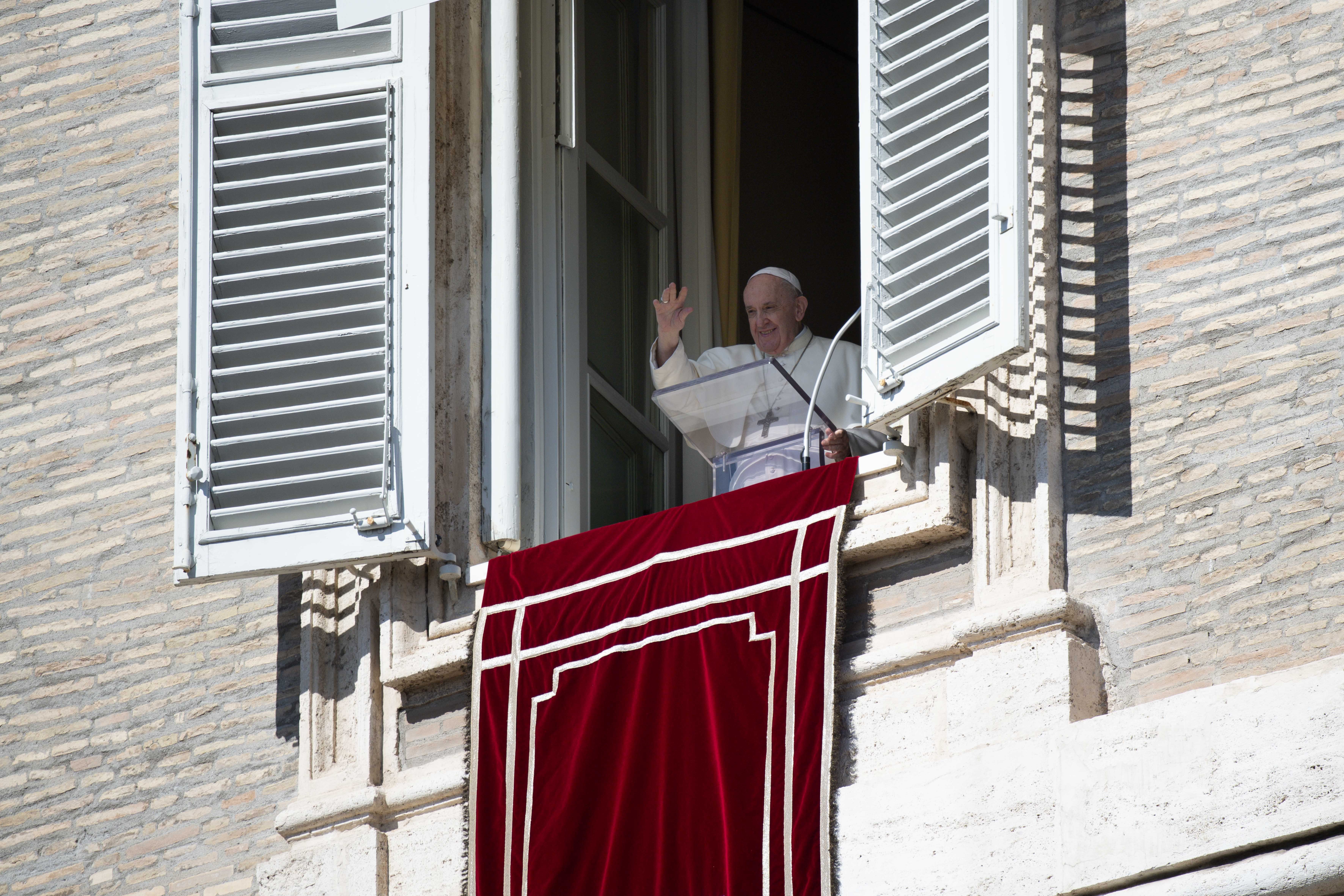 Pope Francis greets the crowd as he leads the Angelus from the window of his studio overlooking St. Peter's Square at the Vatican Oct. 10, 2021. (CNS photo/Vatican Media)

People should ask themselves whether their faith has become a "commercial relationship" with God or if it is a relationship built on freedom, love and generosity, Pope Francis said.

Faith, he said, "is not a cold, mechanical ritual," a "quid pro quo" in which people must do something to obtain something in return.

People need to ask, "What is faith for me? If it is mainly a duty or a bargaining chip, we are off track, because salvation is a gift and not a duty; it is free and cannot be bought," the pope said, speaking to pilgrims gathered in St. Peter's Square for his Sunday Angelus address Oct. 10.

The pope reflected on the day's Gospel reading of Jesus setting out on a journey and encountering a rich man who asked him, "What must I do to inherit eternal life?"

The pope said the verbs the man uses, "must do" and "inherit," show he sees religious belief as "a duty, a doing so as to obtain; I do something to get what I need. But this is a commercial relationship with God, a quid pro quo."

The rich man told Jesus he had faithfully observed the commandments since he was young, but Jesus, "looking at him, loved him," and offered him "the true face of God," the pope said.

"This is where faith is born and reborn: not from a duty, not from something that is to be done, but from a look of love to be welcomed. In this way Christian life becomes beautiful, if it is based not on our abilities and our plans, but on God's gaze," he said.

Jesus then invites the man to take the next step, since he still lacks one thing — giving freely, the pope said.

Jesus told him, "Go, sell what you have, and give to the poor" and then "come, follow me"; however, the man went away sad even though he had been looked at with love by Jesus, he said.

The pope said, "Often, we do the bare minimum, whereas Jesus invites us to do the maximum possible. How many times are we satisfied with doing our duties — the precepts and a few prayers — whereas God, who gives us life," asks for passion in return.

Jesus shows the need to go from a sense of duty to an attitude of loving and freely giving, he said.

The "do nots" of the Ten Commandments lead to the positive action of "Go, sell, give, follow me," he said. "Faith cannot be limited to 'do not,' because Christian life is a 'yes,' a 'yes' of love."

"A faith without giving, without gratuitousness, without works of charity, makes us sad in the end," the pope said.

If people feel their faith has become "tired" or they want to "reinvigorate it," he said, "look for God's gaze: sit in adoration, allow yourself to be forgiven in confession, stand before the crucified one. In short, let yourself be loved by him."