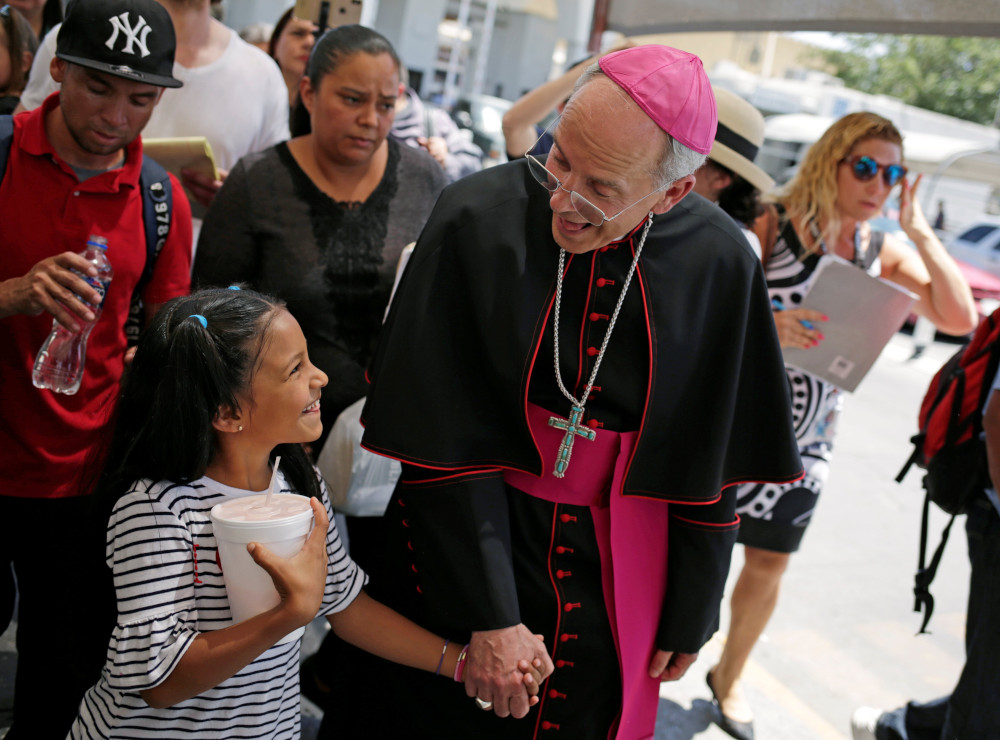 Bishop Mark J. Seitz of El Paso, Texas, shares a smile with a Honduran girl named Cesia as he walks and prays with a group of migrants at the Lerdo International Bridge in El Paso June 27, 2019. (CNS photo/Reuters/Jose Luis Gonzalez)

The World Day for Migrants and Refugees Sept. 27 is a chance for Catholics "to unite the world" on behalf of displaced people and "pray for the well-being of our immigrant and refugee brothers and sisters," said the chairman of the U.S. bishops' migration committee.

The theme chosen by Pope Francis for the 106th observance of this day is "Forced like Jesus Christ to flee," focusing on people displaced within the borders of their own country.

According to the 2020 Global Report on Internal Displacement, there are an estimated 50.8 million internally displaced persons worldwide. Among them, there are 45.7 million displaced due to conflict and violence and 5.1 million who were forced to move because of disasters.

"The World Day for Migrants and Refugees is an opportunity to reflect on the global contributions of immigrants and refugees, and highlight the work of the church to welcome, protect and integrate them," said Auxiliary Bishop Mario E. Dorsonville of Washington, chairman of the U.S. Conference of Catholic Bishops' Committee on Migration.

"We are reminded that regardless of our background, we are all built in the image of God and should be treated as such," he said.

When this year's theme was announced during a livestreamed news conference May 15, Cardinal Michael Czerny, undersecretary for the Vatican's Migrants and Refugees Section, said the focus on internally displaced people is a continuation of Pope Francis' teachings that center on "the discarded, the forgotten, the set aside."

In his Sept. 21 statement about the observance, Dorsonville noted Pope Francis also said the COVID-19 pandemic has exacerbated the forced displacement of people and the difficulties they encounter when seeking protection.

"It is of vital importance for us to embrace love for our neighbor as we love ourselves and live out this commitment daily," Dorsonville said. "Our Holy Father, Pope Francis, also noted in his annual message, 'To preserve our common home and make it conform more and more to God's original plan, we must commit ourselves to ensuring international cooperation, global solidarity and local commitment, leaving no one excluded.'"

Another statement issued ahead of the World Day for Migrants and Refugees came from U.S. Catholic organizations working along the U.S.-Mexico border in the cities El Paso, Texas, and Ciudad Juárez, Mexico — El Paso Bishop Mark J. Seitz and his diocese; the Hope Border Institute; and the Catholic Legal Immigration Network Inc., or CLINIC.

Ina joint statement issued Sept. 24, they called on U.S. political leaders "to restore the right to asylum at the border, end the inhumane practice of immigrant detention, and stop the forced returns of migrants, including unaccompanied children, to situations of insecurity and danger."

Amid this pandemic, they said, "we are more conscious than ever before of our interconnectedness as one human family. And never before has the US government in our name taken so many actions which directly endanger the lives of migrant families and children, layering crisis upon crisis."

In his message for World Day for Migrants and Refugees, Pope Francis "asks us to reflect on the compassion of the good Samaritan and to take risks in order to be close to those whose wounds need binding up in our day," they said.

"As faith leaders, advocates and agencies providing legal and humanitarian relief to refugees at the US-Mexico border, we have traveled to Ciudad Juárez today simply to listen and share with the many migrant families who, like Jesus, have been forced to flee," they said.

Editor's note: We can send you a biweekly email alert with content from The Francis Chronicles. Follow the directions on our email alert sign up page.