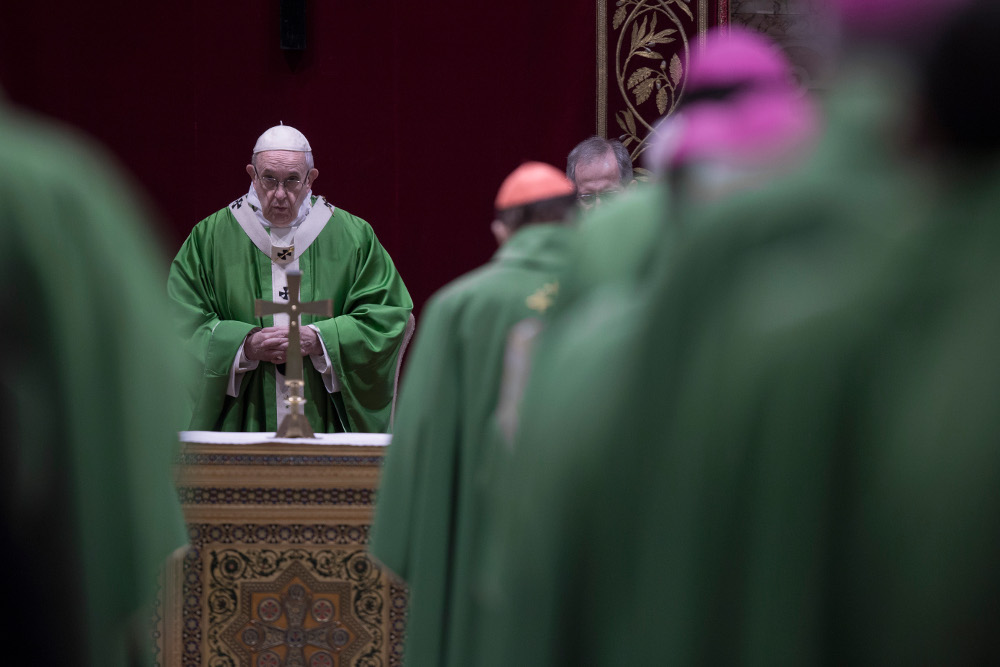 Pope Francis and the heads of bishops' conferences from around the world attend a Mass on the last day of the four-day meeting on the protection of minors in the church at the Vatican Feb. 24. (CNS/Maria Grazia Picciarella)

Editor's Note: This story was updated with details from the press conference at 8:45 a.m. Central time.

Pope Francis ended his summit with 190 Catholic bishops on clergy sexual abuse Feb. 24 with a promise the church will "decisively confront" the abuse of minors, but also warned that the global institution must avoid "ideological disputes and journalistic practices" that he said exploit the scandals.

In a lengthy address ending the first-of-its-kind meeting with the heads of the world's Catholic bishops' conferences, the pontiff mixed condemnations of abuse in the church with references to its prevalence in other areas of society and cautionings against the faith community being too extreme in its response.

At one point in the half-hour speech, the pope called clerics who abuse children "tools of Satan" and declared bluntly that such criminal behavior is "utterly incompatible with [the church's] moral authority and ethical credibility."

At another point, Francis said that in responding to abuse the church must avoid what he called the "extreme" of  "'justicialism,' provoked by guilt for past errors and media pressure."

"The church's aim will … be to hear, watch over, protect and care for abused, exploited and forgotten children, wherever they are," the pope promised.

Francis then continued: "To achieve that goal, the church must rise above the ideological disputes and journalistic practices that often exploit, for various interests, the very tragedy experienced by the little ones."

During the four-day summit, the pope and prelates focused their discussions on three main themes: responsibility, accountability and transparency. They also heard testimonies from abuse survivors and even experienced one survivor play violin for them at an evening penitential liturgy Feb. 23.

Abuse survivors and advocates quickly criticized Francis' closing address as being short on specifics for how the church would combat sexual abuse.

Anne Barrett Doyle, co-director of the abuse tracking website BishopAccountability.org, called the speech a "stunning letdown." She added: "We needed him to offer a bold and decisive plan. He gave us instead defensive, recycled rhetoric."

At a briefing later in the day Feb. 24, Jesuit Fr. Federico Lombardi announced four measures that will be put in place following the conclusion of the summit.

Lombardi, who moderated the summit, said one of those measures would be the combination of a new 'motu proprio' and a new law to "strengthen prevention and the fight against abuse" within Vatican city-state.

The Jesuit said the Congregation for the Doctrine of the Faith will also be publishing a new Vademecum, or handbook, to "help bishops around the world clearly understand their duties and tasks" with regard to abuse.

Francis spoke Feb. 24 following the summit's closing Mass in the apostolic palace. The homily at the Mass was given by Australian Archbishop Mark Coleridge, who reflected on how Catholic prelates had misused the power entrusted to them.

"We have shown too little mercy, and therefore we will receive the same, because the measure we give will be the measure we receive in return," said Coleridge, the president of the Australian bishops' conference. "We will not go unpunished."

Before directly addressing abuse of children by church officials in his later address, Francis spent the first several minutes of his speech discussing the wider sociological impact of abuse. Citing a 2017 UNICEF study on abuse in 28 countries, he noted that 9 out of 10 girls victimized were abused by "someone they knew or who was close to their family."

The pope then spoke of cases of cyber-abuse and what he called the "scourge of pornography," which he said was "a phenomenon in constant growth," and sexual tourism, citing 2017 statistics from the World Tourism Organization that three million people travel each year seeking sexual relations with a minor.

"We are thus facing a universal problem, tragically present almost everywhere and affecting everyone," said Francis. "Yet we need to be clear, that while gravely affecting our societies as a whole, this evil is in no way less monstrous when it takes place within the church."

Arriving at abuse in the church, the pontiff said that "no explanations suffice" for priests who have harmed children.

"We need to recognize with humility and courage that we stand face to face with the mystery of evil, which strikes most violently against the most vulnerable," said the pope.

"The church has now become increasingly aware of the need not only to curb the gravest cases of abuse by disciplinary measures and civil and canonical processes, but also to decisively confront the phenomenon both inside and outside the church," he continued.

The pope said that in peoples' anger over abuse, "the church sees the reflection of the wrath of God, betrayed and insulted by these deceitful consecrated persons."

Francis ended his address with a reference to the World Health Organization's INSPIRE initiative, which proposes seven strategies for ending violence against children and then put forward eight points he said the church would concentrate on in "developing her legislation" on abuse.

The first of those points was a promise that children would be protected and that a "change of mentality" would take place "to combat a defensive and reactive approach to protecting the institution and to pursue, wholeheartedly and decisively, the good of the community by giving priority to the victims of abuse in every sense."

The second and third points were a commitment to "impeccable seriousness" in abuse cases and to a "genuine purification" in the church.

The fourth and fifth points regarded the formation of priests and the "strengthening and reviewing" of the bishops' conferences' various safeguarding guidelines.

"No abuse should ever be covered up, as was often the case in the past, or not taken sufficiently seriously, since the covering up of abuses favors the spread of evil and adds a further level of scandal," said Francis.

The sixth point concerned accompaniment for those who have suffered abuse, the seventh abuse in the digital world and the eighth sexual tourism.

In the seventh point, Francis proposed that the church's norms on child pornography should be changed in order to raise the threshold of what is considered an image of a child to above the current age of 14.

At the briefing later Feb. 24, two of the organizers of the summit hinted at a further change Francis may be considering: getting rid of the use of pontifical secret, or confidentiality, in abuse cases.

Scicluna, who is also an adjunct secretary at the doctrinal congregation, said that with the summit the church has been clear to bishops about how it expects them to handle abuse cases.

"It is now a very clear point in church policy that abuse of minors is an egregious crime, but so is cover-up," said the archbishop. "There is no going back. For decades we were concentrating on the crime. But we also realize that covering up is equally egregious."

The final session of the abuse summit Feb. 23 was marked by frank and forthright speeches to the assembled prelates by Nigerian Holy Child Jesus Sr. Veronica Openibo and Mexican journalist Valentina Alazraki, who has covered the Vatican for some 40 years.

Openibo, the head of her order and a member of the executive board of the Rome-based umbrella group International Union of Superiors General, criticized priests who supported accused brethren over victims and expressed serious concerns about current formation practices.

The sister eloquently blasted what she called a culture of "mediocrity, hypocrisy, and complacency" that she said had brought the church to a "disgraceful and scandalous place."

Alazraki, who has traveled on 150 trips abroad with popes since John Paul II, said those in her profession can help the bishops root out the "rotten apples and to overcome resistance in order to separate them from the healthy ones."

She also made a promise.

"If you do not decide in a radical way to be on the side of the children, mothers, families, civil society, you are right to be afraid of us, because we journalists — who seek the common good — will be your worst enemies," she told the prelates.

This story appears in the Vatican Abuse Summit feature series. View the full series.
A version of this story appeared in the March 8-21, 2019 print issue under the headline: Francis ends summit with promise to ‘decisively confront’ abuse.