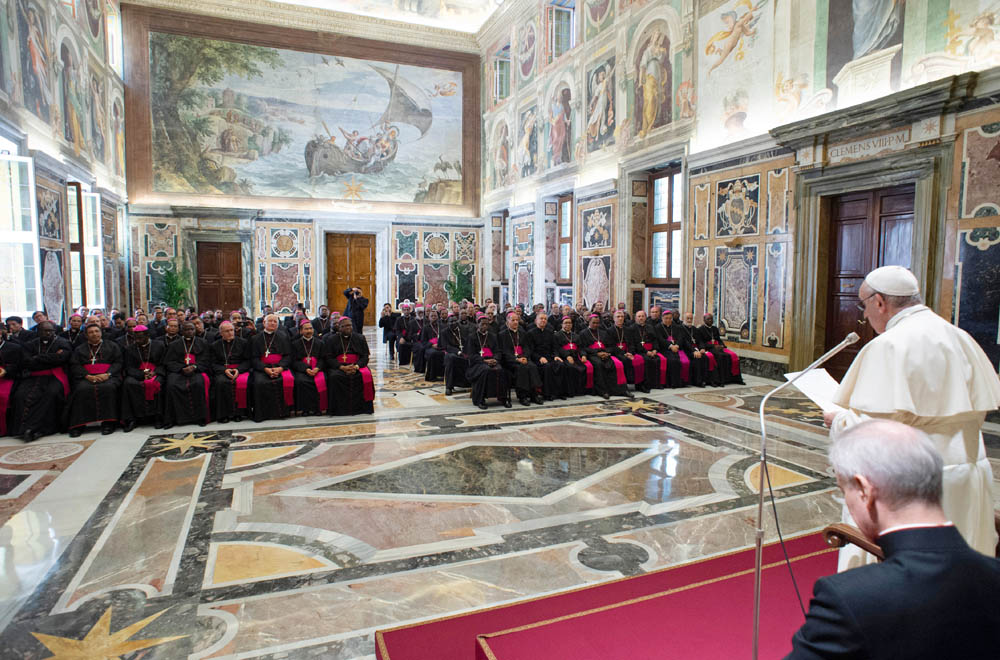 Pope Francis speaks during a meeting with new bishops from mission territories at the Vatican Sept. 8. (CNS/Vatican Media)

Editor's note: This story was updated at 10:15 a.m. CDT with comments from Cardinal Blase Cupich.

Pope Francis has called all of the presidents of the world's various conferences of Catholic bishops to Rome for a February meeting on clergy sexual abuse, in the first such global summons by a pontiff.

Paloma García Ovejero, the vice director of the Vatican press office, announced the decision in a Sept. 12 briefing, saying the pontiff decided to make the move during a meeting of his advisory Council of Cardinals and has already set the dates for the encounter as Feb. 21-24.

"The Holy Father, hearing from the Council of Cardinals, has decided to call a meeting with the presidents of the bishops' conferences of the Catholic Church on the theme of 'protection of minors,'" said García. "The meeting with the pope will take place at the Vatican."

Announcement of the first-of-its-kind meeting comes as Francis is under intense global scrutiny for his handling of clergy sexual abuse after former Vatican ambassador Archbishop Carlo Vigano released a document Aug. 26 alleging a systemic cover-up of allegations against now ex-cardinal Theodore McCarrick.

In his only remarks specifically on the matter to date, the pope said Viganò's document, which contains a host of unsubstantiated and ideological claims and has now been revealed to have been drafted with the help of several ultra-right-wing Catholic figures, "speaks for itself."

Francis is also set to meet Sept. 13 with the president and vice-president of the U.S. bishops' conference in a kind of high-profile encounter not seen since April 2002, when eight U.S. cardinals were summoned to Rome to discuss revelations of abuse with Pope John Paul II.

Galveston-Houston Cardinal Daniel DiNardo, president, and Los Angeles Archbishop Jose Gomez, vice-president, will be joined in their meeting by Boston Cardinal Sean O'Malley, a member of the Council of Cardinals and the head of Francis' advisory commission on clergy abuse.

Although the pope meets frequently with groups of bishops from particular countries, a pontiff has never before called all the presidents of the world's bishops' conferences to Rome.

The situation is so unprecedented that when asked during the briefing how many national bishops' conferences there are across the globe, spokesperson García did not have an immediate answer.

Chicago Cardinal Blase Cupich told NCR Francis' summons is of "utmost importance" and "indicates once again that the pope is serious about addressing sexual abuse by clergy as a top priority in the global church."

"Pope Francis has demonstrated this resolve time and again through a series of concrete actions including removing bishops and cardinals, frequently visiting with victim survivors, and admitting his own mistakes," said Cupich. "We are blessed to have the Holy Father's leadership."

A quick survey of available data indicates there are at least 114 national conferences of bishops in the Latin church and 21 synods, councils, and assemblies of Eastern-rite Catholic Churches.

The closest analogy to the upcoming summit appears to be a Synod of Bishops, when Catholic bishops from around the world come to Rome for discussions on a set topic. But alongside presidents of bishops' conferences, Synods also involve a swath of other prelates and Vatican officials, and they are normally announced at least a year in advance.

Massimo Faggioli, a professor of historical theology at Villanova University, said that Francis' calling of the presidents of the conferences to Rome was a "change of course" from how his predecessors John Paul II and Benedict XVI had considered the national entities.

Under the previous pontiffs, said Faggioli, there was "more emphasis on the individual bishop's authority and less on the bishops' conferences."

McCarrick, a former archbishop of Washington, renounced his place in the College of Cardinals in July following revelation that he sexually harassed or abused several young men during his rise to become one of the U.S. church's most senior prelates.

Former Vatican ambassador Vigano claimed in his Aug. 26 document that he personally warned Francis about McCarrick in 2013, but offered no substantiation of that claim.

In a statement Sept. 10, the Council of Cardinals said the Vatican is now "formulating possible and necessary clarifications" to Vigano's letter. The nine-member group, which was created by Francis in 2013 to advise him on reforming the Vatican bureaucracy, also said it had asked the pontiff to reflect on its own "work, structure and composition."

That request has led to speculation that there could be a refashioning of the membership of the council, which currently includes two prelates under scrutiny: Australian George Pell, on trial in his native country over allegations of past sexual abuse, and Chilean Francisco Errázuriz Ossa, accused of covering up for abusive priests as archbishop of Santiago.

Neither Pell nor Errazuriz attended this week's meeting of the Council of Cardinals.

Asked if changes to the council should be expected before its next meeting, to be held Dec. 10-12, García responded: "We will see."

This story appears in the Vatican Abuse Summit feature series. View the full series.
A version of this story appeared in the Sept 21-Oct 4, 2018 print issue under the headline: Francis summons world's bishop presidents to meeting on clergy abuse.