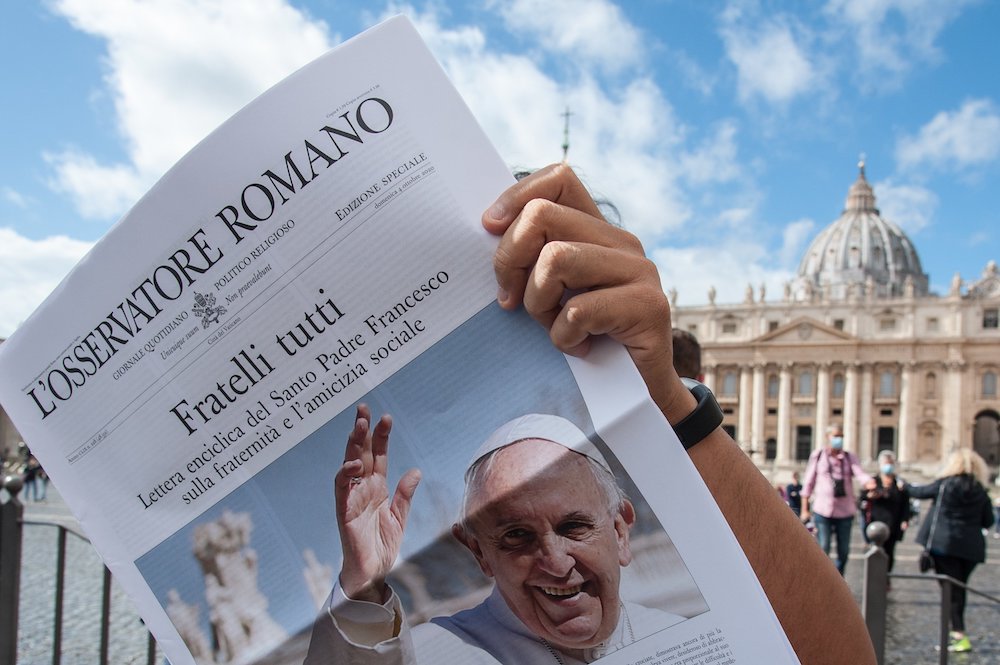 Free copies of the Vatican newspaper L'Osservatore Romano with the front page about Pope Francis' encyclical, " 'Fratelli Tutti,' on Fraternity and Social Friendship," are distributed by volunteers at the end of the Angelus in St. Peter's Square at the Vatican Oct. 4. (CNS/Reuters/IPA/Sipa USA)

The release of Pope Francis' latest encyclical has been greeted by a number of leading U.S. Catholics as a letter that speaks directly to a deeply polarized church and country struggling to overcome racial, economic and political divides.

Fratelli Tutti, signed on Oct. 3 and released on the Feast of St. Francis of Assisi on Oct. 4, challenges unbridled capitalism and the market economy, reiterates that the death penalty is inadmissible and condemns populist, "narcisstic" leaders who are concerned with own popularity over the common good.

Social Justice Sr. Simone Campbell said that many of the themes are particularly salient in the face of a presidential election and legislative gridlock.

"Pope Francis is sending a simple but jarring message to our world: We must move beyond continuous divisiveness and come together to build a world worthy of all God's children," said Campbell, executive director of Network Lobby for Catholic Social Justice. "His words are an indictment on rampant individualism, 'got-you' politics and economic exploitation.

"It is notable that Pope Francis traveled to Assisi to remind us of Saint Francis' teachings on community and inclusivity at a time when economic and racial inequality are so prominent in the United States and around the world. In this moment of great peril, elected leaders in the U.S. have failed in their responsibility to care for the least among us," her statement continued.

"Pope Francis calls for a renewal of politics as 'one of the highest forms of charity' because at its best politics should 'seek the common good,' " wrote Patricia McGuire, president of Trinity University in Washington on Twitter. "Can Americans ever recognize this as the real purpose of politics? We have a long journey ahead of us!"

Writing in The Washington Post, political commentator E.J. Dionne, a Catholic, said that while Francis writes with a much broader audience in mind than just the United States and that he doesn't believe the pope to be trying to influence the choice between President Donald Trump and Vice President Joe Biden, the lessons from the encyclical feel especially close to home.

The pope's condemnations, wrote Dionne, of " 'empty individualism,' a 'narrow and violent nationalism, xenophobia and contempt, and even the mistreatment of those who are different,' and 'a cool, comfortable and globalized indifference,' " will make it "much harder for conservative and right-wing Catholics to insist that the only orthodox vote is for Trump" in the election.

John Carr, director of Georgetown University's Initiative for Catholic Social Thought and Public Life, said in a statement that "the encyclical affirms and applies the principles of Catholic social teaching to the 'new things' of 2020: a global pandemic, economic crisis, political polarization, and social isolation and exclusion."

"In this letter, Pope Francis asks us to extend 'fraternity' from our own families to a suffering world and to expand 'friendship' from the personal to the political and global," wrote Carr.

Among the U.S. Catholic hierarchy, Los Angeles Archbishop Jose Gomez, who is president of the bishops' conference, welcomed the document as "an important contribution to the Church's rich tradition of social doctrine."

"In analyzing conditions in the world today, the Holy Father provides us with a powerful and urgent vision for the moral renewal of politics and political and economic institutions from the local level to the global level, calling us to build a common future that truly serves the good of the human person," wrote Gomez. "For the Church, the Pope is challenging us to overcome the individualism in our culture and to serve our neighbors in love, seeing Jesus Christ in every person, and seeking a society of justice and mercy, compassion and mutual concern."

Cardinal Blase Cupich of Chicago said that the document is "destined to be a defining document and body of teaching for the pontificate of Pope Francis."

"With this powerful encyclical letter, addressed to all people of goodwill, the Holy Father again reminds us why he is considered a preeminent moral teacher — and in an extraordinarily critical and fraught moment in human history," wrote Cupich in a statement.

Several other bishops also took to social media to welcome the document. Bishop Ed Scharfenberger of Albany, New York said the document offers "encouragement for all members of God's family to know that they are loved, that they are connected." Bishop Daniel Flores of Brownsville, Texas, encouraged Catholics to avoid quick takes on the document and take time digesting the 43,000-word letter before commenting on it. "Think and pray while you read," he said. "The world will not be worse off, and your soul will thank you."

Krisanne Vaillancourt Murphy, executive director of the Catholic Mobilizing Network, an  organization working against the death penalty and for restorative justice, praised the document in a statement for putting a spotlight on the death penalty, dedicating a dozen mentions to the matter.

"Social encyclicals are designed to point out the most pressing social issues of our day," said Vaillancourt Murphy. "In dedicating a section of Fratelli Tutti to the issue of the death penalty, Pope Francis has leveraged the full weight of the Church's teaching behind its opposition to capital punishment."

"The significance of the document is further punctuated by its release during the Church's Respect Life Month, and just days before the annual commemoration of World Day Against the Death Penalty on Oct. 10," she added.

The reiteration by Francis of the inadmissibility of the death penalty comes less than two weeks after the National Catholic Prayer Breakfast honored U.S. attorney general William Barr, which prompted backlash from Catholics across the country over the fact that at his urging, the Trump administration resumed federal executions, ending a nearly two-decades-long bipartisan halt to them.

While much of the early reaction to the encyclical has been praiseworthy, several theologians expressed disappointment that the document — which has already been subject to criticism for its title, a quote from St. Francis that directly translates as "Brothers All" — does not cite any women in the text.

Theological ethicist Kevin Ahern of Manhattan College took to Twitter to note that he had read the document twice and reviewed the footnotes and was "amazed by the absence of recognized women's voices."

"Not surprised at this point but it all makes the good parts of the text seem less shiny and new," he wrote.

For those still slogging their way through the entire text, Jesuit Fr. James Martin offered a quick synopsis, saying it builds on Francis' 2015 encyclical on the environment and care for creation.