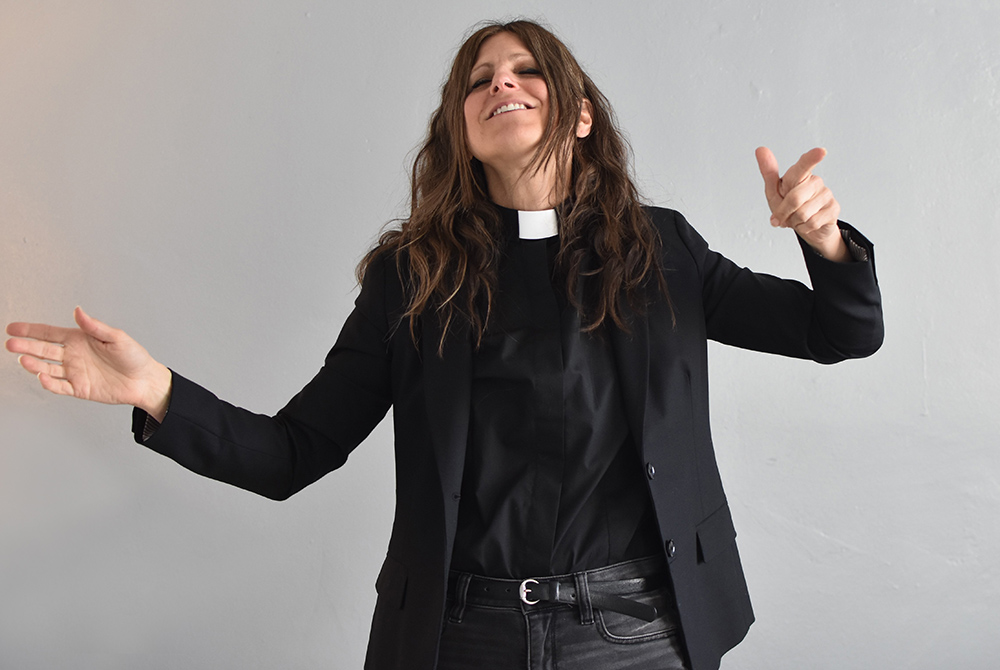 Anne Tropeano, whose use of the moniker "Father Anne" has helped attract wide media coverage of her coming Oct. 16 ordination ceremony, portrays her choice as part of a long spiritual journey. "God is calling me to be ordained in the Roman Catholic tradition and to work for justice," she said. (Courtesy of Anne Tropeano)

When asked why she has chosen to be ordained as a Roman Catholic priest — thus breaking the Catholic Church's ban on the ordination of women and crossing the threshold of formal excommunication — Anne Tropeano's response is simple.

"God is asking me to do this," she says. "God is calling me to be ordained in the Roman Catholic tradition and to work for justice."

Tropeano, whose use of the moniker "Father Anne" has helped attract wide coverage of her coming Oct. 16 ordination ceremony from various secular media outlets, including The New Yorker magazine, portrays her choice as part of a long spiritual journey.

Though she received the sacraments as a child, Tropeano was not raised in the church and did not begin to practice the faith until her late 20s, when she went through the Rite of Christian Initiation of Adults.

"I moved to Portland with a band I was managing, and it was there, while attending a Jesuit parish, that the call emerged," Tropeano said in a recent NCR interview. "The Jesuits took me under their wing. I began to pray, do retreats and become active in the parish community."

The Spiritual Exercises of St. Ignatius "changed me profoundly and forever," said Tropeano, whose ordination is being organized by the Association of Roman Catholic Womenpriests.

Part of a movement that began in 2002 with the ordination of seven women by a Catholic bishop in a clandestine ceremony on the Danube River, the association is one of two such groups of women claiming apostolic succession. They say there are now some 250 ordained women worldwide.

Related: A 'love letter of unanswered questions' about women's ordination

The official Catholic Church disputes their claims. In his 1994 apostolic letter Ordinatio Sacerdotalis, Pope John Paul II said, "the Church has no authority whatsoever to confer priestly ordination on women." Pope Francis further codified the church's stance this June, updating canon law to reflect a 2007 decree that women who are ordained be automatically excommunicated.

Tropeano's ordination is scheduled to occur at the Episcopal Cathedral of St. John in Albuquerque, New Mexico.

She portrayed the Jesuits' influence on her as fundamental.

"They taught me to pray," she said. "That was when I heard a call — not just to be a priest, but specifically a Jesuit priest. How could God be calling me to do something impossible?"

Tropeano began doing pastoral ministry, but that was not enough to satisfy her call. At age 40 she began studies at the Jesuit School of Theology in Berkeley, California, which is now part of Santa Clara University. 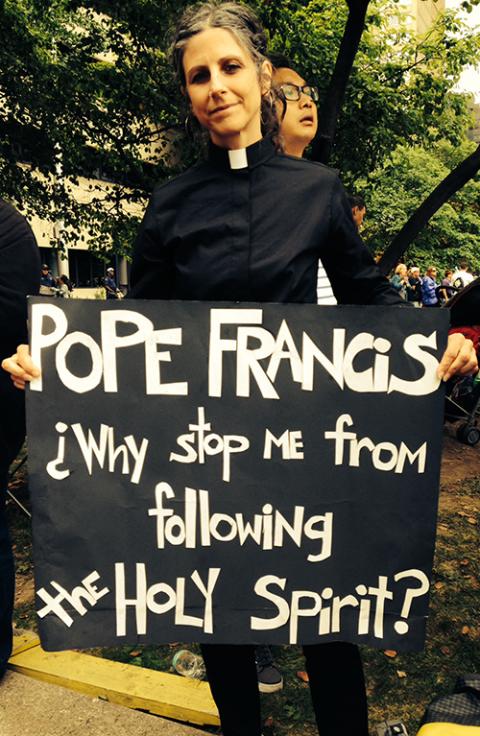 "For 12 years I've tried to be obedient to the magisterium," she said, referring to the church's ban against ordaining women. "I've wrestled with the call. The charism of pouring oneself out for God, being willing to sacrifice for God's creation — this is what gives me the strength to take this road, to be ordained, to face excommunication."

Maggie Wright, who met and befriended Tropeano while visiting the Jesuit School of Theology while conducting research for her website about women inspired by Jesuit spirituality, said it was difficult for a woman to study in an institution where the vast majority of the students were Jesuits.

"Behind Anne are many women who have felt the call to join the Society of Jesus," said Wright. "It's a touchy subject as Jesuit men are pretty progressive, and Jesuit parishes, schools and retreat centers are generally good places to be a Catholic woman who wants to serve, study, speak and lead. But the glass ceiling is the Society of Jesus itself. There are many Jesuit vocational events for men, but silence around women's vocation."

Wright believes firmly that Tropeano's Jesuit formation has led her to discern a true call.

"She is committed to the institutional Roman Catholic Church as well as personal discernment and pursuit of justice," Wright said. "That desire and love for the universal church in combination with concern for realities that change with the times are very characteristic of the Jesuits. Anne is very obedient to her prayer and truly committed to following what she discerns."

The prospect of excommunication is painful to Tropeano.

"Since publicly coming out with my intentions, I stopped taking Communion at the church I attend on Sundays so as not to cause problems for the pastor," she said. "Other Roman Catholic Womenpriests do receive Communion in an act of protest against the law. But I want people to see the punishment that women like me experience. I go up with my arms crossed, but I don't receive."

Nevertheless, Tropeano is willing to pay the price to follow her call. She has lived in Albuquerque for three years and is still discerning her mission. "I plan to offer spiritual direction, retreats, weddings and funerals. I especially want to minister to the LGBTQ community," she said.

Starting in November she plans to offer a Sunday evening contemplative service in the Jesuit tradition. "It's a kind of stripped-down Mass geared toward silence and stillness of heart, people readying themselves for their work week. We'll see if a community takes root from it."

She also plans to continue to her advocacy for women's ordination in the Catholic Church and do a speaking tour in the summer of 2022. "So many people are unaware that this movement even exists," she said.

Tropeano's ordination will be concelebrated by 10 Christian faith leaders from the Albuquerque area. "We need the ecumenical communion to take a stand with us for ordination of women within the Roman Catholic Church," she said.

The Rev. Kristina Maulden, who serves as dean of the Cathedral of St. John, where Tropeano's ordination will take place, praised her "positive energy, hopefulness and perseverance."

"Particularly in our religious landscape, where people don't 'do church' like they used to, she has innovative ways of reaching people through ancient spirituality and Christianity's old traditions," said Maulden. "She is very rooted in the sacraments. I see her as a 'tent maker' in the tradition of St. Paul, a kind of itinerant sacramentalist filling in gaps for Roman Catholics who can't get married or baptized in the church. That might be the basis of a community." 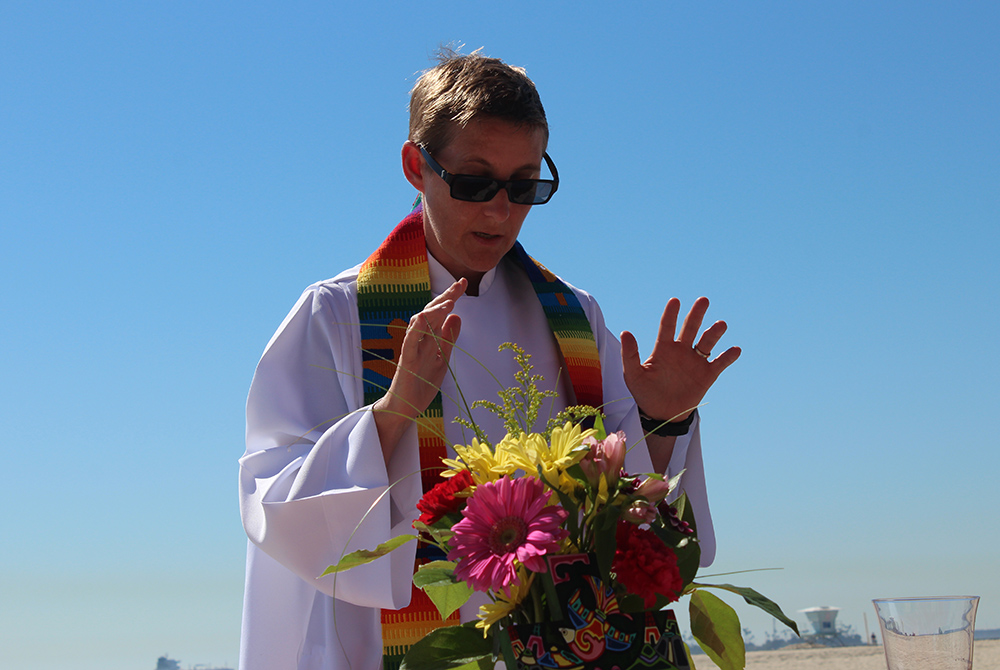 Jennifer O'Malley, who was ordained in 2012 as part of the Roman Catholic Womenpriests group and is board president of the advocacy organization Women's Ordination Conference, will also be concelebrating at Tropeano's ordination.

"Anne is obviously committed to living her vocation and call as a priest. She's not letting canon law stop her, which is a courageous thing to do," O'Malley said. "She sees a link between the ban on women's ordination in the church and the oppression of women and girls throughout the world."

"The title 'Father Anne' makes a powerful point," O'Malley added. "It may be a hook to get people to ask 'Why not?' Dialogue is prohibited, so speaking is itself a courageous act. We're doing something the church says we cannot do, which is just to talk."

O'Malley said she does not believe that we will see the official Roman Catholic Church ordain women in our lifetimes.

"Pope Francis is conservative in this area, as are other bishops," she said. "I think they are too afraid of what an equal role for women might look like. They will hold onto power and control for as long as they can."

"I want to ask him if he's really prayed about this," she said. "I don't believe he wants to cling to male power. I think there's some other reason — maybe worries about the church fracturing, or else not having enough experience with women who have been called."

"I wish he'd meet and hear the stories of women from around the world who are called," she continued. "I know it could be damaging to change church teachings overnight. But I want Francis to lift the ban on speaking about this, to let the Holy Spirit move."