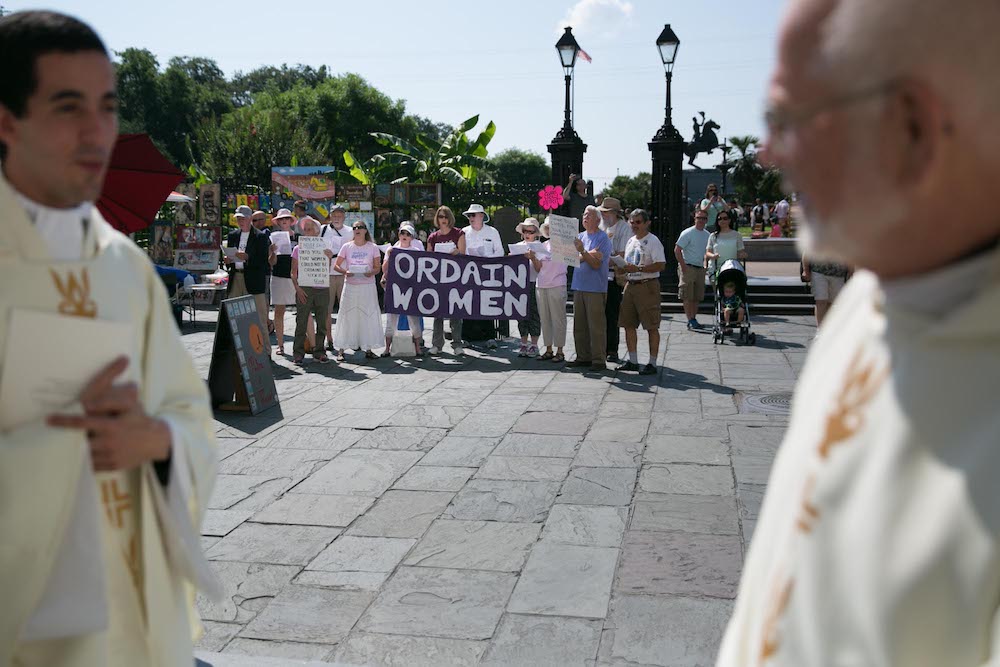 Supporters of women's ordination gather in Jackson Square in New Orleans outside the St. Louis Cathedral during the archdiocese's ordination ceremony for new priests in June 2015. Before the pandemic, the group held this prayer vigil annually to show solidarity with Catholic women who are called to ordination. (Gabriela Arp)

"Area woman excommunicated following illicit ordination" is a headline many of us have seen over the past two decades, and Peterfeso's experience is no exception. A St. Louis native and cradle Catholic, the author was drawn into the highly publicized excommunications of Elsie McGrath and Rose Marie Hudson, whose 2007 ordinations brought a special breed of ire from then-St. Louis Cardinal Raymond Burke. Over seven chapters and extensive indexes, Peterfeso, an associate professor of religious studies and a cultural historian, weaves 10 years of surveys and research into a love letter of unanswered questions.

While seeking to address three main questions about ordination, creative protest and religious change, Peterfeso comes to define RCWP's "interpretive space" as the “sacramental mystery of a middle way." The book reveals the emotional labor of dissension, the theological complexities of spiritual and sacramental expression and depths of Catholic identity of womenpriests. 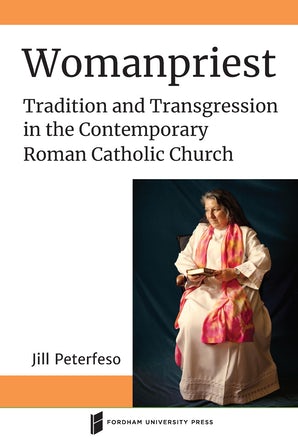 The chapters on vocation and ritual shine as the women authentically claim and model their ministry in community. As Peterfeso reminds us, the 1976 papal document Inter Insigniories ("On the Question of Admission of Women to the Ministerial Priesthood") not only states that only men can be validly ordained, but that only men experience the call to priesthood. Despite the spectrum of theological and liturgical expressions among womenpriests, the common narrative of God as protagonist in their faith — and an obedience to God's call over and beyond the limits constructed by the men of the Vatican — is paramount. This living witness to the unbounded call, the limitless power of God, is one of the strongest theological arguments for women's ordination and these women courageously embody it.

Community is also a central theme of womenpriests' ministries, both the element of a community calling forth a woman to lead and the radical inclusion of all people in RCWP sacraments and ritual. The healing and consolatory power of womenpriests, meeting the needs of the people of God, is equally one of the most compelling arguments for women's ordination.

For those who saw the 2010 documentary "Pink Smoke Over the Vatican," Peterfeso adds an academic and critical lens to the arguments raised in that film, teasing out issues of transubstantiation, ontological change, religious garb and even decision-making structures, and the spectrum of understanding of these issues among womenpriests. The tension of tradition and transgression, as the title refers to, is the interrogation of patriarchal inheritance, Catholic identity and feminism. In short: It's complicated.

The book expands on the beginnings of RCWP with the Danube 7, seven women ordained by two male bishops on international waters in 2002, and the immense hurdles of navigating male patriarchal power, and their own fumbles that opened the movement to scrutiny from the very beginning. While it's tempting to look critically on what might be considered amateur missteps, or poor media training, the book elaborately asks the question: Does it really matter? My conversations with womenpriests confirm the author's assessment of a significant disconnect between the details of these ordinations and their day-to-day ministry. According to the institutional church, the ritual itself is simply an "attempt" and a crime, recently formalized in the new canon 1379, regardless of the bishops' episcopal status. Would an "airtight" ordination ceremony with a recognized bishop in good standing with Rome publicly ordaining women have demanded a different result? It is hard not to look longingly at the 1974 ordinations of 11 Episcopal women, recognized by the Episcopal Church just two years later, and wonder.

Today, womenpriests are not asking for permission from Rome and instead find strength in their theological acumen and their experiences of pastoring people and communities in all their beautiful complexities, which sounds refreshing and necessary.

Cloudy storytelling also surrounds the 2010 split between RCWP and the Association of Roman Catholic Womenpriests, which the author earnestly tried to tease out, and yet repeatedly encountered a code of collegiality upheld publicly. I find divisions can be personality-driven, but more often get to the most fundamental issues, and appreciated the author's inclusion of the internal divisions within the Women's Ordination Conference in its earliest years over what is now an age-old question: how and when to dialogue with patriarchy. In 1976, WOC was invited to name a "permanent liaison" to the National Conference of Catholic Bishops but struggled to agree on the terms of the relationship, and before WOC could act, Inter Insigniories put a stop to all that.

While the book is both historical and unfolding, I found the conclusion that the womanpriest movement continues to grow a bit more hopeful than accurate. I have no doubt that the awareness of the need for women in ministry is growing exponentially, but the question of long-term sustainability looms for many Catholic organizations, and the U.S. Catholic church, as members age and the pull of Rome wanes.

My colleague Katie Lacz and I recently conducted a survey called "Mainstreaming Women's Ministries" and found that of 224 Catholic women age 21-40 with Master of Divinity degrees or higher, 82% would not consider ordination through a movement like RCWP. While priestly women will endure, and trained, capable, Catholic women will persist in ministry where the Spirit calls them, the lack of sustainable financial support often forces young women to another path.

While the question of women's ordination may seem just as far off as it has for the past few decades, accompanied by the increasing suspicions of the institution of priesthood, the witness of nearly 250 ordained women has shifted the landscape of Roman Catholicism forever. Their presence continues to inspire rich and often challenging debates within the feminist Catholic movement and the global church, and I believe we're better for it. The courageous acts and the leadership of a small group of women has liberated and challenged the Catholic imagination globally and continues to demand an urgent response and corrective action from the Vatican.

Womanpriest is respectful and unafraid to explore the performative, playful and paradoxical realities of feminist priesthood, relishing in the divine wisdom, humanity and the oxymoronic praxis of prophetic obedience.

A version of this story appeared in the Oct 15-28, 2021 print issue under the headline: A 'love letter of unanswered questions' about women's ordination.