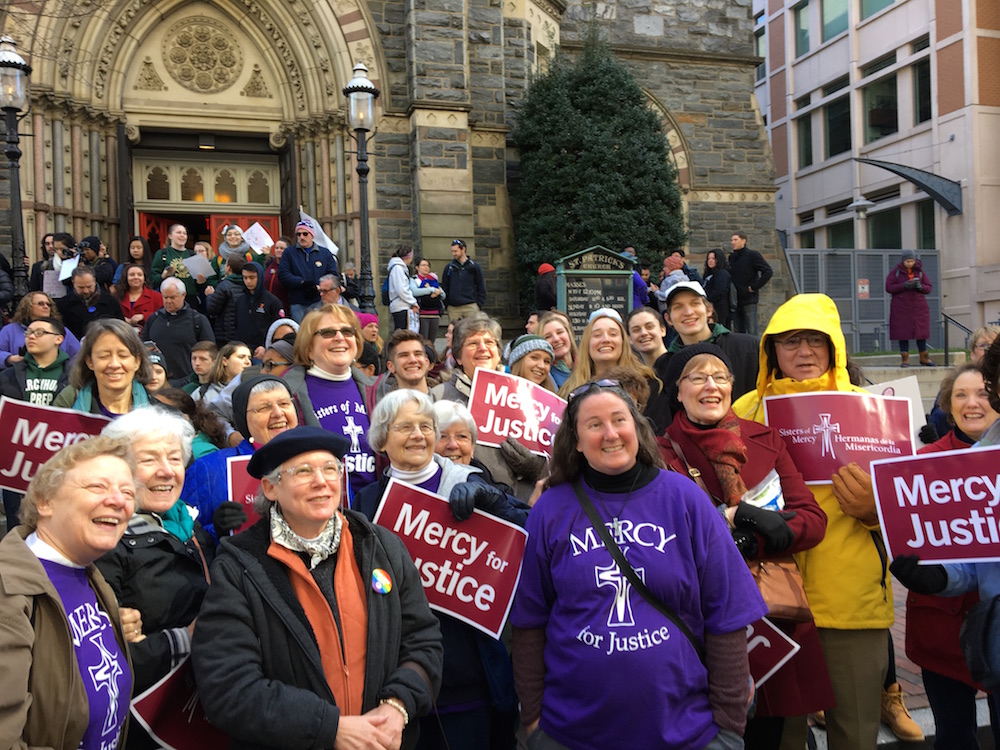 Students and supporters gather outside St. Patrick's Church before heading to the march along Pennsylvania Avenue, March 24 in Washington, D.C. (Julie Bourbon)

The young organizers of today's March for Our Lives could not have asked for more glorious weather in the nation’s capital, as hundreds of thousands of peaceful marchers took over Pennsylvania Avenue and downtown D.C. to say "enough" to gun violence, and "vote them out" to members of Congress who don't support sensible gun control legislation.

The march was organized by students from Marjory Stoneman Douglas High School in Parkland, Florida, scene of a mass shooting Feb. 14 that left 17 dead and as many more wounded.

Fellow students and young people from around the country took up the rallying cry and organized more than 800 sibling marches in cities large and small, including Parkland and Las Vegas, which experienced its own mass shooting last year.

Hundreds of young people from Catholic high schools and colleges joined the march in Washington, many of them gathering first at a church downtown for testimonials and Mass before taking to the streets.​

Mass was held at St. Patrick's Church, where Pope Francis visited in 2015 with clients of Catholic Charities DC, just next door. Franciscan Fr. Jacek Orzechowski presided, drawing a parallel between the readings from Jeremiah, who as a mere youth was appointed a prophet of peace, and the young people gathered there in the capacity crowd. 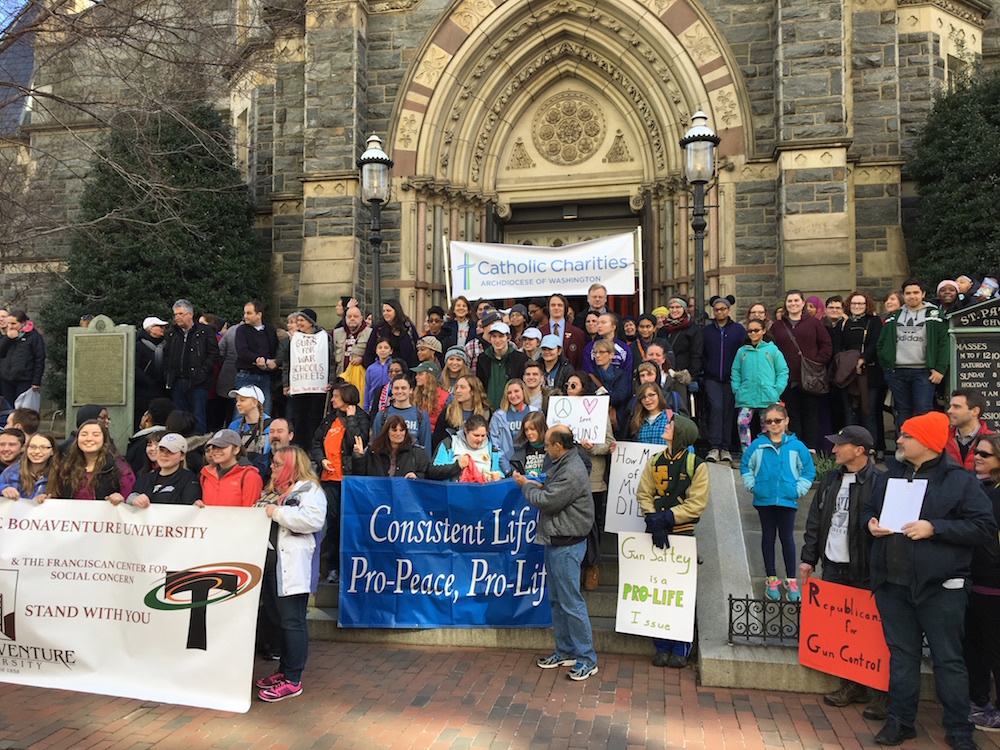 The crowd posed outside St. Patrick's Church after Mass, before heading to the march. (Julie Bourbon)

"God believes in you. God is empowering you," he told the students. Through their actions, he said, they could "overcome violence and hatred with the power of love."

A group of 27 students from Mercyhurst Preparatory School in Erie, Pennsylvania, traveled through the night to participate in the march, leaving at 3 a.m. in a "cheese bus," as senior Hannah Moffett, one of the organizers, called the yellow school bus they rented for the six-hour trip to DC.

"The administration was really on board. Everyone was excited to go to the march," said Moffett. Mercyhurst students raised more than $1,175 for the trip, she said, through a GoFundMe campaign and by designing "Enough" sweatshirts that they sold to students, their families and alumni.

"Coming down here was super empowering," she said.

"I'm thrilled" to be here, said Tyler Kloss, another senior, who was making his first trip to Washington.

Local Catholic school students were represented, as well. Caroline Barry, from Stone Ridge School of the Sacred Heart in Bethesda, Maryland, celebrated her 17th birthday today by giving a testimonial before the Mass.

"There's a time for mourning, and a time for thoughts and prayers," said Barry. "But they cannot be an excuse for inaction."

Worshippers poured out of the church after Mass, stopping to pose for a group photo on the front steps and taking snack bags of granola bars, fruit juice and toaster pastries that Catholic Charities DC had assembled for the long day of marching ahead.

Maggie O'Neill runs the agency's volunteer programs, and said they typically assemble the bags for the homeless as part of their "Cup of Joe" outreach program.

"We made extras today," O'Neill said, as she tried to herd students together for the photo. 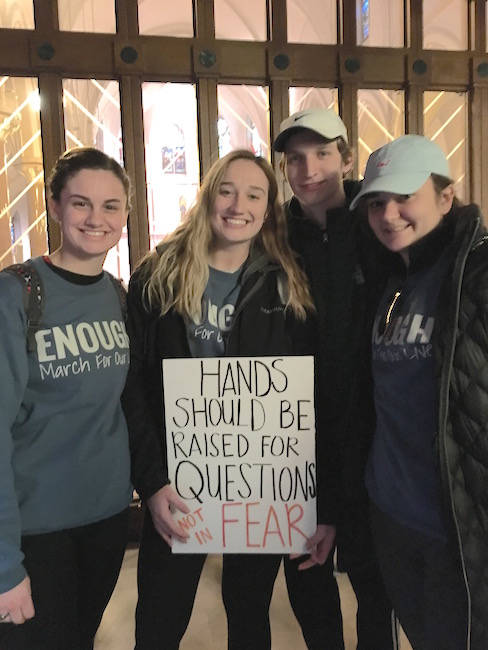 As the group broke up, they joined in with marchers already streaming down the street, toward Pennsylvania Avenue, several blocks away. The Catholic students quickly melted into the mass of humanity, which included students from Scranton Preparatory School and St. John's Jesuit in Toledo, Ohio.

This reporter could not find those students in the crowd, although the St. John’s crew called from a rest stop the day before, during their eight-hour drive.

John Spengler, a senior at St. John’s, said that participating in the march was an opportunity for them to live out the tenets they were being taught at school.

"One is being committed to doing justice," said Spengler. "To act out that tenet in our lives and make sure that, no, we’re not just graduating from St John’s, we’re actually able to fight for justice in this nation."

Spirits were high as the march began, even as the crowd became gridlocked within sight of the Trump International Hotel near the White House.

Related: Live blog: March for Our Lives protests across the US for gun control 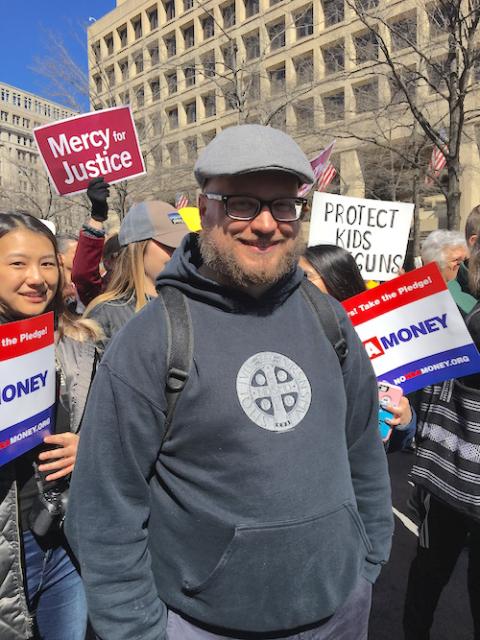 Matthew Ochalek, a theology teacher at Mercyhurst Prep, was accompanying the student group. Calling himself a longtime protester, he was bowled over by the turnout and the passion of the crowd.

"I think that this is one of the most inspiring moments of my life. All of this being led by young people," said Ochalek, who said it reminded him of the prophet Isaiah. "It will be a child that leads you. And here we are."

The program began promptly at noon, several blocks from the U.S. Capitol. Giant video screens broadcast the speeches all the way down Pennsylvania Avenue, to a crowd that stretched on for block after block. All of the speakers were teenagers. All were impassioned.

One Stoneman Douglas teen on the stage calculated that there have been 95 mass shootings since Congress last passed gun legislation in 2008. Countering the idea that he and his fellow students are too young to make a difference, he reminded the crowd that Joan of Arc was a teenager when she led an army.

"We would not need clear backpacks and metal detectors in school if there were not weapons of war in the hands of civilians," he said, before leading the crowd in a chant of  "vote them out." That rallying cry was heard throughout the day.

One of the youngest speakers was 11-year-old Christopher Underwood, from Brooklyn, New York. 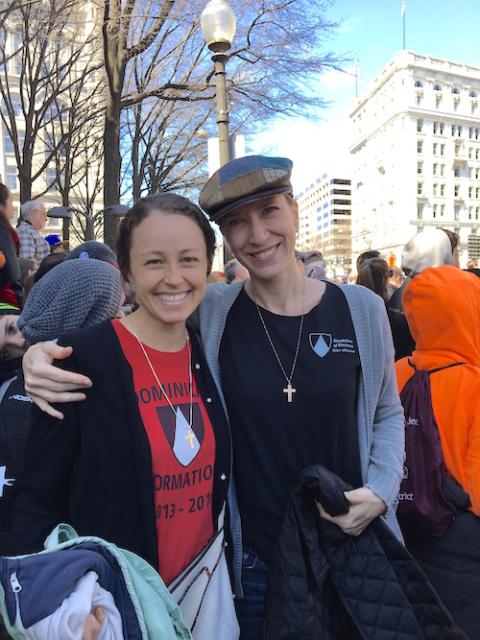 Dominican Srs. Christin Tomy and Quincy Howard were among the many women religious who were at the march. (Julie Bourbon)

"Senseless gun violence took away my childhood," said the boy, who looked even younger than he was as he described the shooting death of his teenage brother in 2012. "I would like to not worry about dying. Don't I deserve to grow up?"

"Talk about speaking truth to power," said Sinsinawa Dominican Sr. Christin Tomy, who was visiting from Wisconsin. "I think these are the voices we need to be listening to.

Back at St. Patrick's, Orzechowski and two Franciscan postulants from Silver Spring, Maryland, were taking a break from the march.

"So many of the speakers knew the issues so well," said Steven Young, one of the postulants. "They put to shame a lot of the adults. I feel ready to step behind them and to follow their lead."

Postulant Loren Moreno agreed. "They've taken this dark moment and turned it into a movement," he said. "It's amazing."

Moreno added that he was surprised to learn that the U.S. Conference of Catholic Bishops has been pushing for gun legislation for many years. "I feel like we need to talk about it more," he said. "It's clearly a life issue. It's clearly a justice issue."

Orzechowski was thrilled with the participation of so many Catholic high school students, and by the connections they were making between school shootings and violence in marginalized communities around the country.

"Social engagement is a critical piece of what makes education Catholic," he said. "Coming here and listening to the young people is an opportunity for the church to be evangelized." 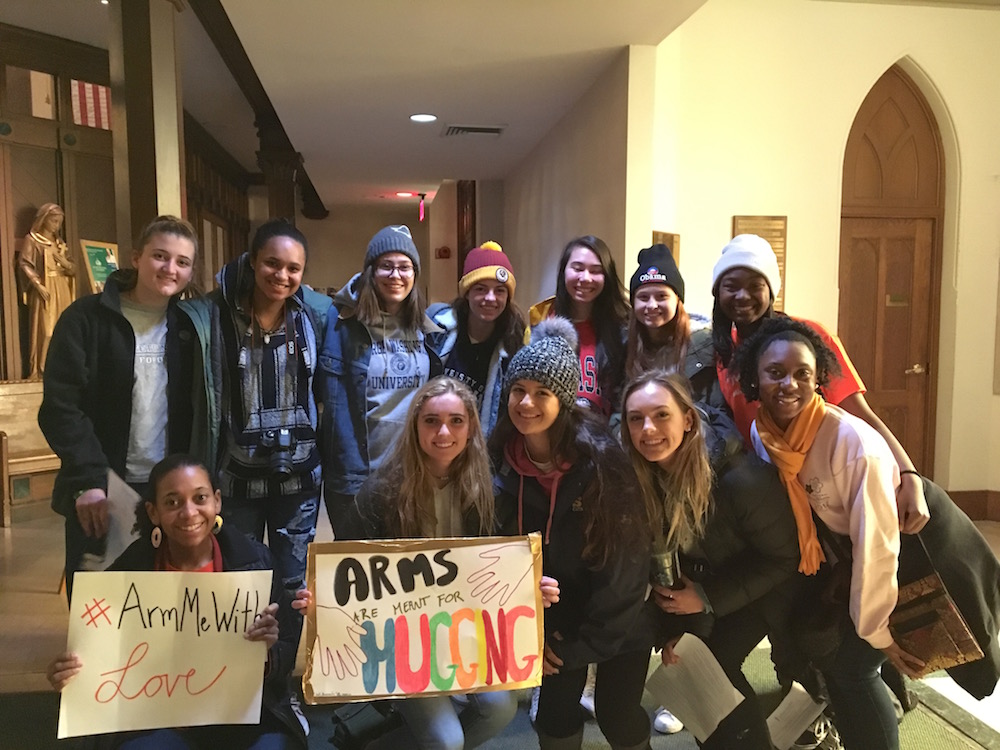 [Julie Bourbon is a freelance writer in Washington, D.C.]

This article was funded in part by a generous gift from Tom Bertelsen as a means to support the search for a solution to gun violence in our culture.

This story appears in the Gun Violence feature series. View the full series.
A version of this story appeared in the April 6-19, 2018 print issue under the headline: March for Our Lives.