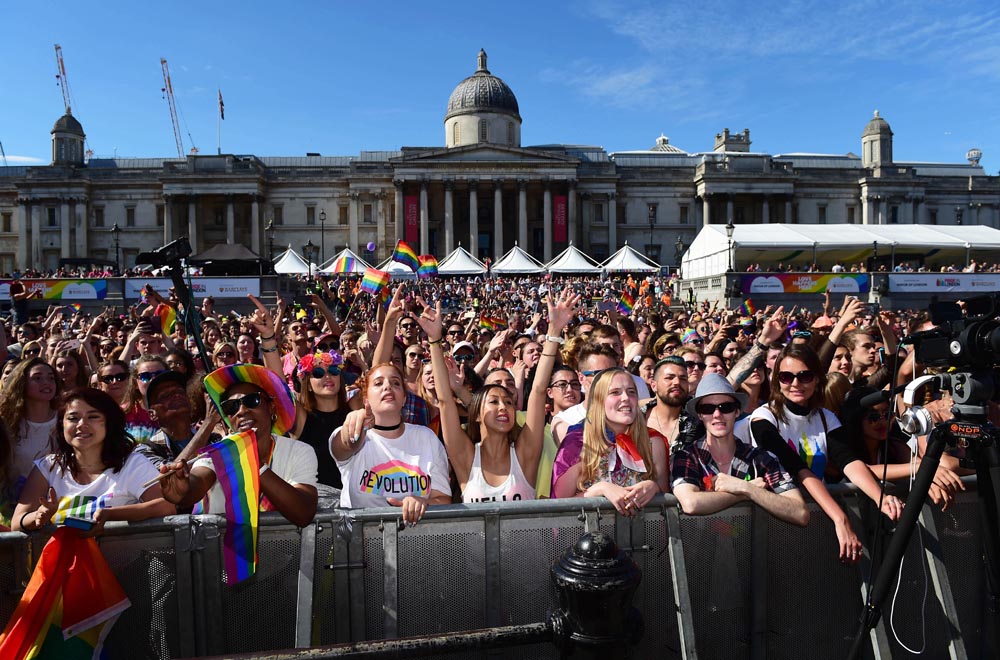 In June 2017, when Jesuit Fr. James Martin was promoting his then-newly published book Building a Bridge: How the Catholic Church and the LGBT Community Can Enter into a Relationship of Respect, Compassion, and Sensitivity, one of many interviews he offered was with Kaya Oakes, published on the website Religion Dispatches.

Oakes asked Martin whether he believed there is "a common struggle in the church between women and LGBT people." Martin said that while there is an "interesting parallel" between the issues, ultimately "that analogy fails, because LGBT people are the most marginalized people in the church today. And even though many women feel marginalized, you still have conferences at the Vatican on women, or Women's Day at the Vatican. You don't have an LGBT Day at the Vatican."

Though Martin's views may have changed in the year since that exchange, I raise his words up as an example because it's an argument I've heard more than once in my dozen years of ministry with LGBTQ Catholics.

There is this enduring sense that the church's treatment of women and LGBTQ persons are separate issues, and, as a result, the movements for women's equality and LGBTQ inclusion tend to remain in separate silos.

More than once in progressive circles of Catholics, I've heard reformers insist on remaining silent about women's equality in the church in the hope that it will facilitate them in getting the chance to dialogue with members on the hierarchy about LGBTQ inclusion.

"What I wish is that all of these well-intentioned advocates could see is that neither camp has an edge over the other, nor is there any suffering contest to be had over who is more oppressed by the institutional church."

And, by the same token, I've met women who were passionate about a fully inclusive priesthood, but did not invite lesbian voices to speak at their events, for fear it would compromise their chances of being heard by church leaders.

I've met gay men who would be content in a Catholic Church that fully welcomed LGBTQ Catholics, but did not ordain women, and I've met activists for women deacons and priests who believe that sacramental marriage for same-sex couples would be asking too much of the church.

What I wish is that all of these well-intentioned advocates could see is that neither camp has an edge over the other, nor is there any suffering contest to be had over who is more oppressed by the institutional church. The truth of the matter is, both women and LBGTQ people are equally marginalized in the church because they are marginalized by the same idea: the so-called theology of complementarity.

Complementarity is a remarkably new concept in Catholic theology, yet it reigns supreme among the hierarchy when any questions about sex or gender arise.

It was first developed by mid-20th century theologian Hans Urs von Balthasar and, later, inspired Pope John Paul II, who elevated the idea to venerable status in his formulation of his Theology of the Body.

In essence, complementarity teaches that God has a very specific plan for humanity; a plan that makes itself known by the way in which God designed male and female bodies. The biological differences between men and women are evidence that God intends different roles and purposes for the sexes. It is also evidence that sex should only take place between one man and one woman, and must always be "open" to life.

Complementarity insists on strict gender roles. Men are called to be leaders and to take initiative, and women are called to nurture, serve and play a supportive role to men.

Though, in theory, men and women are equal in terms of dignity, men have a natural priority because Jesus was made incarnate in male flesh. Women are, as von Balthasar wrote, "the help, the security, the home man needs; she is the vessel of fulfillment specially designed for him."

Von Balthasar also added, "It is women's essential vocation to receive man's fruitfulness into her own fruitfulness … [s]he responds through reproduction."

This theological idea is the backbone of the reason why popes, from John Paul II through Francis, believe that women cannot be priests and same-sex couples should not have sex (let alone marry). Both are contrary to God's plan for humanity.

This argument was employed multiple times by the hierarchy in the past few weeks:

On May 29, Archbishop Luis Ladaria, prefect of the Congregation for the Doctrine of the Faith whom Pope Francis will elevate to Cardinal on June 29, reaffirmed the church's ban on the ordination of women to the priesthood. Calling the teaching "definitive," Ladaria's core argument was that it is impossible for the church to confer sacred orders on women because their "substance" and their bodies make it impossible.

On June 16, in off the cuff comments to the Forum delle Famiglie, an Italian lay movement representing Catholic families, Francis reportedly said "People speak of varied families, of various kinds of family," but "the family [as] man and woman in the image of God is the only one."

Francis' comments should come as no surprise, since in his apostolic exhortation Amoris Laetita he says, "There are absolutely no grounds for considering homosexual unions to be in any way similar or even remotely analogous to God's plan for marriage and family."

Sadly, the institutionalized homophobia extended to gay priests on May 24 when the pope reportedly reasserted the ban on gay priests, saying that men with "deeply rooted" homosexual tendencies, or who practice "homosexual acts," shouldn't be allowed into the seminary.

Francis' comments were a reaffirmation of the 2016 document that he approved called "The Gift of the Priestly Vocation," which bans gay men from seminaries and ordination.

So, women and LGBTQ people are being denied sacramental rites in our church because who we are, in our very beings, does not match God's plan for humanity. We are all acting in ways that God would deem unnatural because we are not living in accordance with complementarity.

Women cannot be priests because their bodies or their "substance" do not permit them to take on a role that God designed for men.

Same-sex partners cannot be married or constitute a family because, as a couple, their bodies don't match up sexually the way God has ordained they should.

Gay men should not be admitted to the seminary because their so-called "tendencies" are "contrary to the natural law."

This single notion of complementarity generates so many barriers between God and God's beloved children. It perpetuates the profoundly unjust message that we are not all equal in the eyes of God. Rather, some of us are intrinsically inferior, ironically, based on our God-given gender or our God-given sexual orientation.

As a queer woman with a vocation to the priesthood, I understand well how demoralizing these teachings are. But rather than despair, perhaps we can see this as invitation for women and LGBTQ persons to deepen our solidarity with one another in our struggles for genuine equality in our church. Complementarity is the point where, together, we can strive for intersectional justice. We are all fighting the same battle against the same teaching.

It is erroneous to think that LGBTQ people will gain genuine equality in their church before women will, or vice versa, because in order to really achieve justice in our church, the same theological idea must be dismantled.

It is time to tear down the walls of the silos that separate us as activists because, the doctrinal reality is, we will ultimately achieve equality and justice together, or we won't achieve it at all.