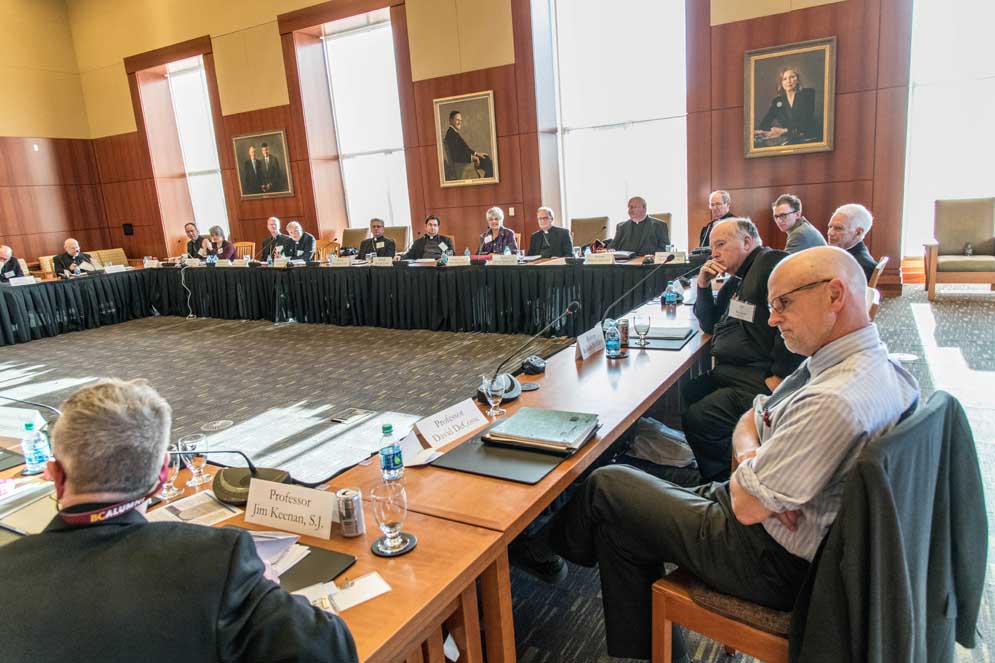 This past week I traveled with eight other pastoral leaders and theologians across the country so as to assist our bishops in discussing Pope Francis' 2016 apostolic exhortation on family life, Amoris Laetitia.

We met at three universities in succession: Boston College, the University of Notre Dame, and Santa Clara University. At each university at least 15 different members of the hierarchy attended. The three respective university presidents — Jesuit Fr. William Leahy, Holy Cross Fr. John Jenkins, and Jesuit Fr. Michael Engh — hosted welcome dinners for the participants on the eve of each single-day seminar, held respectively on Feb. 19, 21, and 23.

This seminar series followed a three-day meeting Chicago Cardinal Blase Cupich and I hosted at Boston College back in October, where we launched a discussion among U.S. bishops and theologians about an exhortation that is shaping the new face of ministry in the global Catholic Church.

Present at the October meeting were 15 members of the hierarchy and about an equal number of theologians and pastoral leaders. Cupich and I appropriated a model used earlier last year in Paris by Cardinal André Vingt-Trois, who alongside the president of the Institut Catholique, Msgr. Philippe Bordeyne, hosted a meeting among bishops, theologians and pastoral leaders to better understand the reform-minded papal teaching.

Because that Boston meeting was so successful, Cupich, together with Cardinal Kevin Farrell, Atlanta Archbishop Wilton Gregory, and San Diego Bishop Robert McElroy, asked me to host three similar one-day seminars during the first week of Lent at the three universities on three different days, so that bishops might be able to find an appropriate date and location to participate.

Cupich invited all U.S. metropolitan archbishops and then diocesan bishops so as to have 15 bishops at each location; he garnered 47 acceptances — a slightly higher number than expected.

In order to provide the grounds for a discussion, we invited back four speakers from October: Boston College’s Brian Robinette, to focus on Nones and Millennials; Manhattan College’s Natalia Imperatori-Lee, to focus on Hispanics and Latinos; Catholic Theological Union’s C. Vanessa White, to focus on Black Catholics; and canon lawyer Msgr. Jack Alesandro.

We added two theologians from Marquette University: Kate Ward, to focus on the working and economically poor classes; and Conor Kelly, to focus on the reception of Amoris Laetitia in the universal church. And we also added two pastoral leaders: Jonathan Lewis, from the Washington archdiocese's Young Adult Ministry office; and Paulist Fr. John Hurley, who gave an extraordinary report of his work overseeing the 2016 San Diego diocesan synod on the family.

Besides these, we also had two different episcopal speakers at each location: Washington Cardinal Donald Wuerl and Gregory at Boston College; Cupich and Newark, New Jersey, Cardinal Joseph Tobin at Notre Dame; and McElroy and Cheyenne Bishop Steven Biegler at Santa Clara.

These men shared their impressions of the discussion of Amoris Laetitia in the United States and their own promotion of the exhortation in their own dioceses. I organized all these events in coordination with Farrell, Prefect of the Vatican's Dicastery for Laity, Family and Life, in consultation with Cupich.

I also applied for and received funding from three foundations to cover travel and housing for all participants, but none of the speakers received any stipends for their week of service. The universities provided meals, meeting space and other supports. 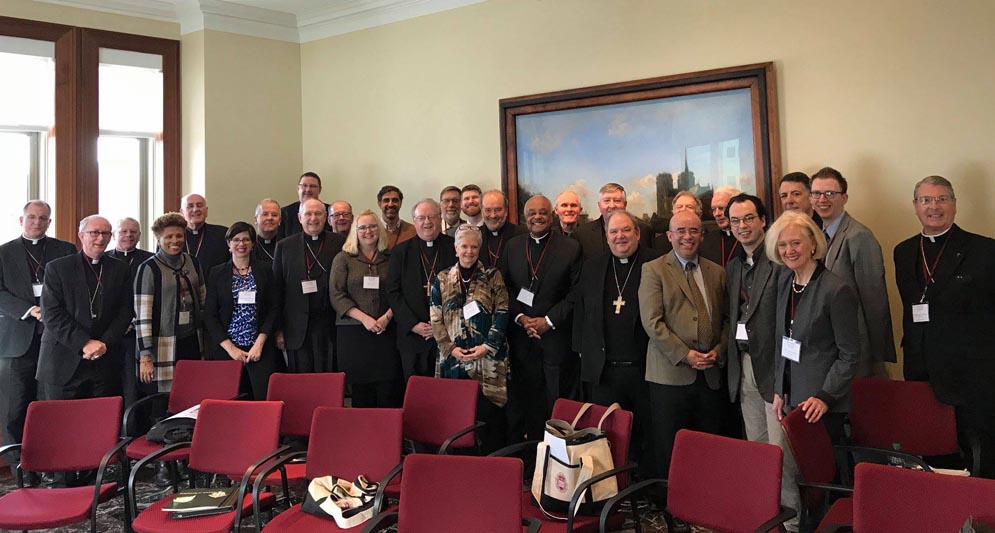 Finally, while I hosted the seminar at Boston College, Tim Matovina hosted it at the University of Notre Dame and David DeCosse at Santa Clara.

As a result of our efforts in October and last week, 62 bishops in the United States have now discussed with fellow bishops, theologians and pastoral leaders ways for implementing Amoris Laetitia.

Let me offer you seven takeaways from this remarkable week. 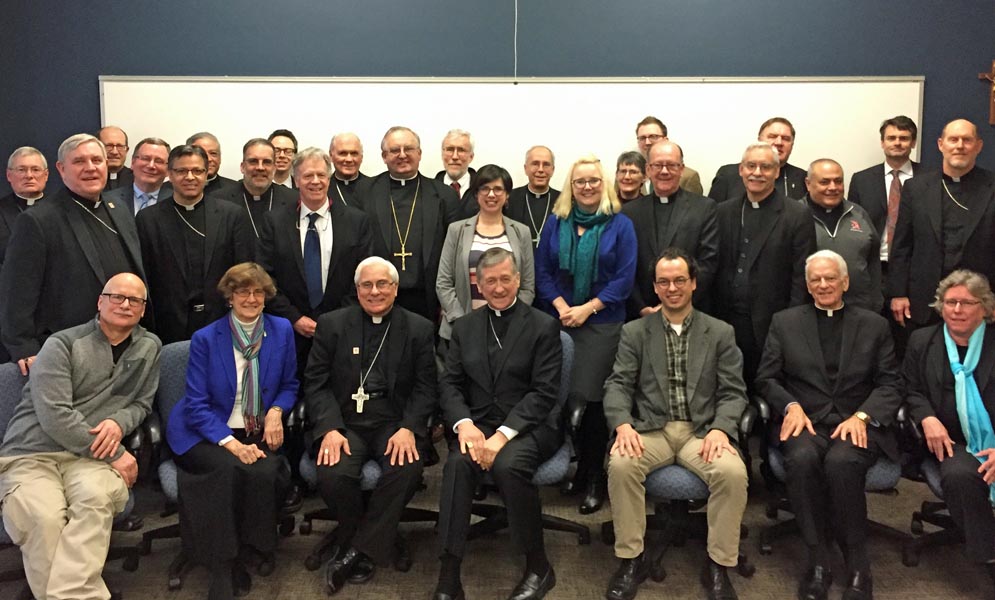 Group photo of participants for the "Amoris Laetitia" seminar Feb. 21 at the University of Notre Dame (Provided photo)

First, the bishops, theologians and pastoral leaders met easily, respectfully, positively and collegially with one another. The tone, style and content were in each setting candid, hope-filled and honest. Both bishops and theologians were equally consoled and pleased by the success of the gatherings. Throughout there was little defensiveness; on the contrary, there was a hermeneutics of generosity among all participants.

Second, the success occurred because there were great expectations from both bishops and theologians for a meaningful dialogue on the much-neglected exhortation. These expectations clearly grew out of the experience of the October meeting, where theologians presented to the bishops and happily found that their bishops had growing interest in what the theologians had said.

As both Imperatori-Lee and White said at each of the four locations, they had always hoped that one day their work would be at the service of the church’s leadership. Similarly, I think the bishops felt very much supported by the theologians who repeatedly offered their services to the hierarchy.

Third, the center is expanding. Hurley used an image of how the San Diego synod successfully found its rhythm because the "pegs of the tent were extended rather than retracted." At each location we invited roughly six additional local theologians so as to offer parity between bishops and theologians. By week's end, then, 62 bishops and roughly 45 theologians had enjoyed such an experience.

Fourth, theologians and bishops work best when they are talking not about themselves, but about the church they both serve. At no point did any bishop lament his challenges not being appreciated, nor did any theologian recount narratives of being overlooked.

In fact, our best discussions followed the panel of Robinette, Imperatori-Lee, White and Ward, when we heard from them the contemporary challenges of the young, Hispanic, black, poor and working class populations. When the teaching church goes into a learning mode a great deal of cooperation emerges.

Fifth, the language and imagination of Francis were present. Terms like discernment, accompaniment, gradualism, growth, freedom and conscience became the language of the conference. But they were coupled with insights about our own American culture that is so deeply alienated and alienating, in which, as one person said, almost anything can be "weaponized against the most vulnerable."

In a way, the discussion was animated by mercy with an appreciation of its healing balm. But the discussion also turned repeatedly to the practical where imaginative programs for outreach were evoked time and again.

These discussions ranged from canonical ones on the processus brevior and the meaning of an annulment itself to how to celebrate with married couples their love in less formal and more meaningful ways.

One person referred to what he found when he first entered his parish ten years ago, which he called "a very simple approach to accompaniment, eight years prior to Amoris Laetitia being written."

He recalled that at the conclusion of the entrance hymn, the pastor greeted the congregation and said, pausing for emphasis where appropriate and making eye contact with as many as possible: "Good morning and welcome to the Catholic Community of … No matter who you are, no matter where you are on life’s journey: All. Are. Welcome."

To this day, the pastor says that every Sunday.

Sixth, at the end of each meeting, both bishops and theologians said we need to host such discussions like these with some regularity.

The U.S. Catholic silence on Amoris Laetitia stems from its silence on many matters. The silence is allowing many to drift away without realizing what it is that the church led by the Gospel offers. We have lost the art of Catholic encounter, conversation and dialogue. But Amoris Laetitia provides an occasion for us to discuss that and, more than anything, to read its pages!

Alesandro said that whenever a couple asks him to preside at their wedding, he invites them to read the beautiful Chapter 4 of Amoris Laetitia and to return to have a discussion on it. Reading Amoris Laetitia can open one’s eyes, ears and mouth to have a fruitful conversation about its remarkable vision.

Repeatedly, people said that if we could just get away from the toxicity of opposition to Amoris Laetitia and read and discuss it, we might find that it could help us end the alienating silence so evident in the U.S. church.

Seventh, humor helps. Hurley talked about the range of receptionists whom engaged people encounter when they contact the local parish to say they want to get married. He asked, do they hear, "Congratulations, that is wonderful, how joyful, what can we do to assist?" or "Are you registered in the parish?"

The most clever moment came, however, from young people. When we sat down to Santa Clara’s welcome dinner, Fr. Engh told us that a group of students led by Nicole Jacobus wanted to perform a song they had prepared for us.

As they began with, "Wise men say only fools rush in … ," we suddenly realized they had brought Elvis into the conference as people began to hum "but I can't help falling in love with you." The joy of love was alive as we heard "take my hand, take my whole life too."

The first week of Lent was a remarkable time for all of us.

[Jesuit Fr. James Keenan is a moral theologian who serves as Canisius Professor and Director of The Jesuit Institute at Boston College. He co-organized the Feb. 19, 21, and 23 one-day seminars on Amoris Laetitia with Chicago Cardinal Blase Cupich and Cardinal Kevin Farrell, Prefect of the Vatican's Dicastery for Laity, Family and Life.]