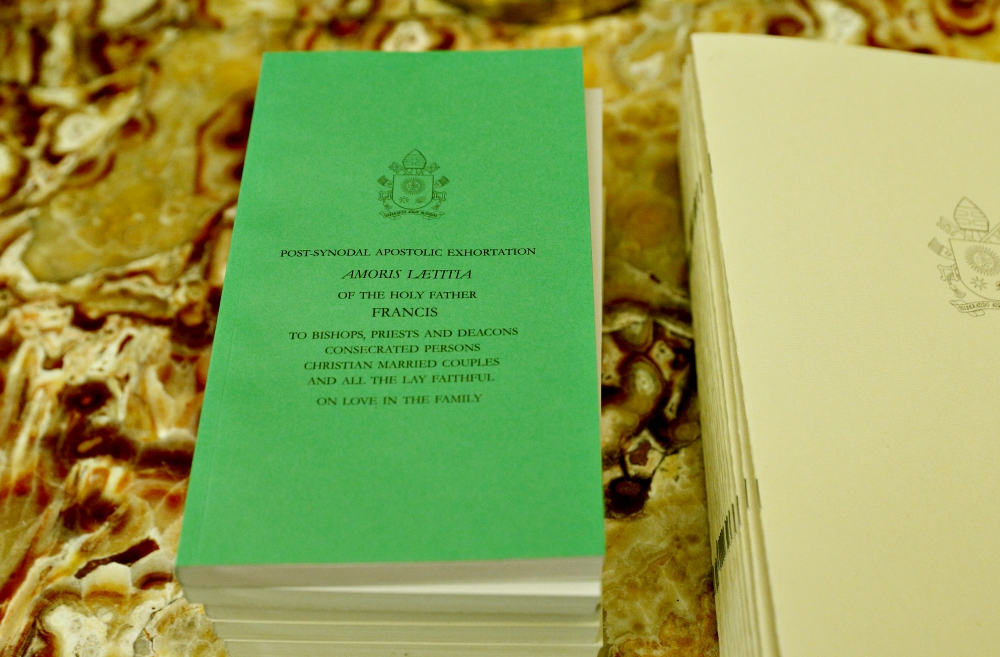 Copies of Pope Francis' apostolic exhortation on the family, "Amoris Laetitia," are seen on a table at the Vatican in January 2017. (CNS/Paul Haring)

Forty-seven Catholic bishops from across the U.S. will take part in a series of daylong seminars in mid-February aimed at helping them better understand and implement Pope Francis' 2016 apostolic exhortation on family life, Amoris Laetitia.

The seminars will be led by a team of seven theologians and several bishops and held on separate days at Boston College, the University of Notre Dame and Santa Clara University. Among the speakers: Cardinal Donald Wuerl of Washington, D.C.; Cardinal Blase Cupich of Chicago; Cardinal Joseph Tobin of Newark, New Jersey; and Bishop Robert McElroy of San Diego.

The initiative was announced Feb. 12 by Jesuit Fr. James Keenan, a theologian at Boston College who is organizing the seminars alongside Cupich and Cardinal Kevin Farrell, head of the Vatican's Dicastery for Laity, Family and Life.

The seminars follow a two-day conference Keenan and Cupich hosted at Boston College last October, where two cardinals, 12 bishops and 24 other invited participants discussed what they called the "new momentum" that Amoris Laetitia ("The Joy of Love") gives local bishops to renew their pastoral practices toward families.

In an email announcing the events, Keenan said Cupich and other bishops from the October event hoped the new initiative would "allow American bishops the opportunity to further their understanding and their pastoral implementation of Pope Francis' apostolic exhortation."

A program for the Boston event shows it will consist of three panel discussions, focused on the methodology of Amoris Laetitia, the challenges and opportunities it presents, and the processes of episcopal leadership and pastoral formation it envisions. The day in Boston starts with a Mass celebrated by Wuerl.

Included in the team of theologians leading the seminars are:

The previous October conference was considered the first of its kind and was noted for a collegial atmosphere in which bishops and theologians could share ideas openly.

In an essay for NCR afterward, Keenan called the event "refreshing" and remembered a bishop stating that "no one [had] the shields up" during the discussions.