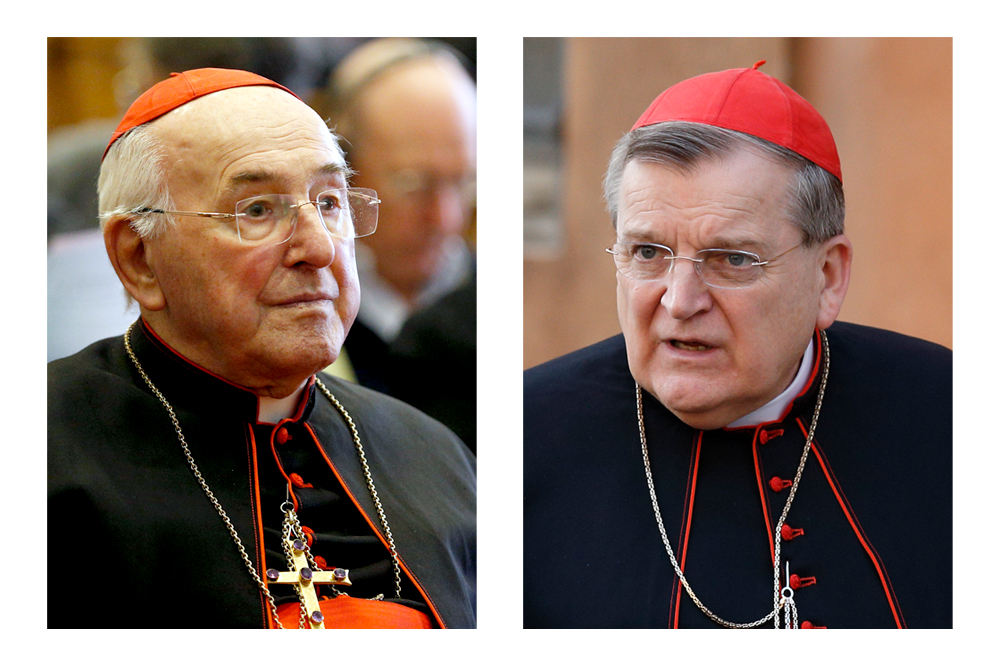 The two remaining cardinals of a group of four that publicly challenged Pope Francis over his apostolic exhortation Amoris Laetitia in 2016 have reaffirmed their opposition to the possibility of the Catholic Church allowing divorced and remarried persons to receive Communion.

Approving a short declaration made after a conference in Rome April 7, U.S. Cardinal Raymond Burke and German Cardinal Walter Brandmüller say with a few dozen other participants they feel compelled to speak again "amidst the grave danger to the faith and unity of the Church that has arisen."

But instead of offering a new direct challenge to Francis, those taking part state they wish to "testify and confess" to six points concerning the church's understanding of marriage, including: "persons who are divorced and civilly remarried ... are living in a situation that is objectively contrary to the law of God."

"We confess our faith before the supreme pastor and teacher of the Church and before the bishops, and we ask them to confirm us in the faith," they state.

Along with Cardinals Carlo Caffarra and Joachim Meisner, since deceased, Burke and Brandmüller issued an open letter to Francis in November 2016 containing five yes or no questions, known as "dubia," about how the pope understands church teaching.

A specific focus of the cardinals' questions was whether Francis meant through Amoris Laetitia to allow divorced and remarried persons to receive Communion. The pope is not known to have responded to the four cardinals.

While Francis did not specifically issue a new law or regulation in his exhortation allowing remarried Catholics as an entire group to receive the Eucharist, he called for "pastoral discernment" of individual situations and proposed "the logic of pastoral mercy" in working with remarried persons.

Since Amoris Laetitia's publication, Francis has also given his official backing to a set of guidelines from a group of Argentine bishops that said the document "opens the possibility" for Communion for some remarried Catholics after a thorough process of discernment.

The April 7 conference in Rome was titled "Catholic church, where are you going? Only a blind man can deny that there is great confusion in the Church." Organizers held the event in Caffarra's honor, and shared a letter from one of his nephews expressing agreement with the occasion.

The event's final document affirmed the participants belief that marriage "can be dissolved only by death," that those who remarry while their first spouse is alive "commit the grave sin of adultery" and that "no subjective judgment of conscience can make an intrinsically evil act good and licit."

Besides Burke and Brandmüller, others to speak at the short afternoon event included Auxiliary Bishop Athanasius Schneider of Astana, Kazakhstan, who has called on Francis to revoke pastoral guidelines from any local church allowing divorced Catholics Communion.

Retired Hong Kong Cardinal Joseph Zen, who has sharply criticized a rumored pending deal between the Vatican and mainland China as a capitulation to the superpower, also offered a video greeting to those present.