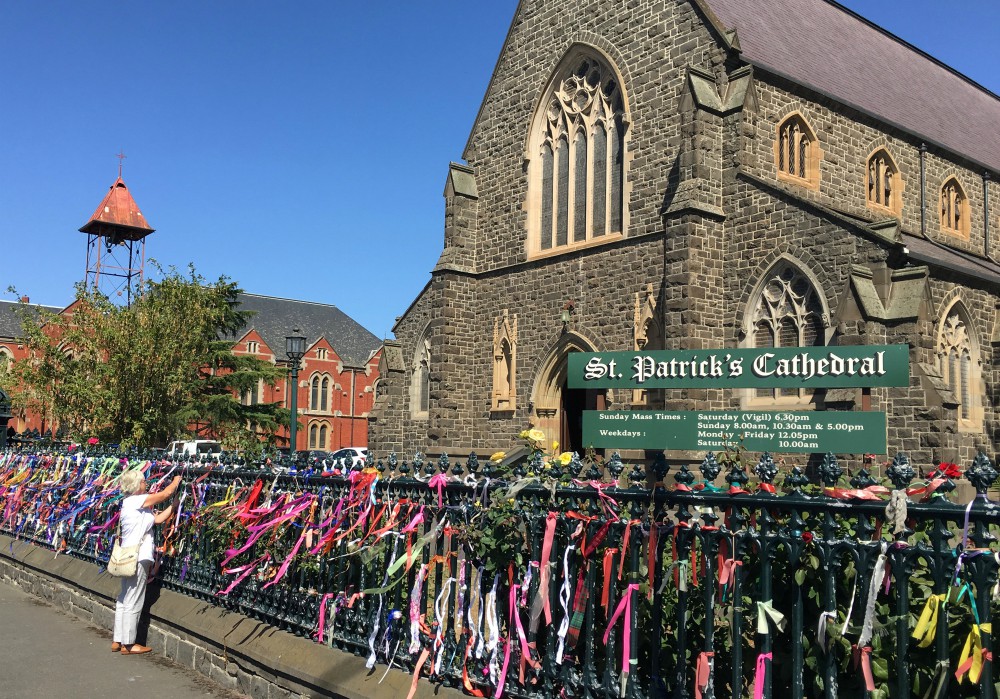 A woman puts a ribbon on the fence of St. Patrick's Cathedral in Ballarat, Australia, in February 2019. The ribbons raise awareness and show support for victims of abuse. (CNS/Reuters/Jonathan Barrett)

There are signs that the Catholic Church's response to the sexual abuse crisis is now getting at deeper, institutional questions. In particular, how local churches — parishes and dioceses — are governed.

In the last few years, a unique example that could bring encouraging news has come from the Australian church.

Since 2017-18, the abuse crisis has taken on a new dimension, thanks to the unveiling of cases (such as disgraced former cardinal Theodore McCarrick) and of extensive cover-ups identified and published in the reports of nationwide and regional investigations (such as in Australia, Chile and Pennsylvania).

The new phase of the crisis has focused on the direct involvement of bishops, cardinals and the Vatican. It has also identified that the crisis is not restricted to children and also involves women religious and other vulnerable persons — and has become a global crisis with huge repercussions on the relations between church and state in various countries.

The new phase in the abuse crisis has also shown much complexity: It is not just a legal and ethical crisis, but also a theological one and a crisis of models of church governance.

Pope Francis has reframed the scandal as something that must move the church to conversion. We must consider all the different levels that this conversion must reach: It is a pastoral and theological conversion as well as a conversion of ecclesial structures.

The Australian church plays a particular and unique role in this conversion, for several reasons.

The Australian government's Royal Commission into the Institutional Responses to Child Sexual Abuse (2013-17) undertook an in-depth, wide-ranging investigation into many organizations. This investigative process produced a damning exposé of abuse, not just in Catholic institutions, but across Australian society.

The new phase in the abuse crisis has shown much complexity: It is not just a legal and ethical crisis, but also a theological one and a crisis of models of church governance.

The bishops and religious orders said the review should be conducted "in light of Catholic ecclesiology," and entrusted the work to a new Implementation Advisory Group. That group in turn established a Governance Review Project Team.

I had the honor of being a part of this review, as one of four external consultants invited by the review project team, whose work took place between April 2019 and April 2020. During the first week of March 2020, the whole group engaged in intensive work, lodged at the former quarantine station (Q Station) in Manly, on the coast of Sydney — an ironic location for the seminar, given the pandemic that was declared just a few days after.

During this intensive week, the group reflected on the task of receiving the recommendations of the Royal Commission in one key area: the governance of the local church.

After 20 drafts, the title of the final 208-page report is "The Light from the Southern Cross: Promoting Co-Responsible Governance in the Catholic Church in Australia." At the beginning of May, the final version of the report was submitted to the bishops and the religious orders, which will decide how to use the report and its recommendations.

As the matter is still under consideration, the recommendations we made cannot be discussed in detail here. But our report will be studied for many years to come by theologians, church historians, canon lawyers, and all those with an interest in connecting spiritual and institutional reform in the Catholic Church.

This report could become an example of how a local church can go about reforming its governance structure. No local church is exempt from this task.

My experience with this group has been an important one that will remain unforgettable: not just in terms of my professional life, but also of my life as a Catholic. This group has been guided by a true collegial and synodal spirit, a genuine sensus Ecclesiae — obedient but also courageous citizenship in the church both local and global.

The experience of the Australian church in dealing with the abuse crisis has been interpreted in the group with a wisdom capable of staying clear from facile ideological exploitation of the scandal. The group was aware of the danger of weaponizing the crisis and refused to find refuge in a causal, simplistic or popular explanation of what happened.

The work of the group and our report promote a development in the governance of the church toward the direction of a co-responsible synodal model that involves much more input from laypeople, particularly women, at all levels.

Our report is rooted in the Australian experience but is aware of the global and universal dimension of the Catholic Church — from cultural, canonical and theological points of view.

It is a proposal that receives Francis' invitation to a pastoral conversion for the specific issue of church governance, but also is rooted in a theological understanding of church governance with the requisite historical depth, cultural sensitivities and financial challenges.

The Australian church has been one of the epicenters of the sex abuse crisis. In some sense, the crisis is still unfolding if one looks at the fallout of the acquittal of Cardinal George Pell in April and, four weeks later, the publication of the findings of the Royal Commission about what Pell knew when he was a priest in the Ballarat Diocese in the 1970s, long before becoming cardinal.

But the Australian church is also trying to find a path through and out of this crisis in ways that not only reflect the needs of the society in which it lives, but also in ways that can indicate a possible path for other national churches. "The Light from the Southern Cross" outlines, for Australia, a way to discern a synodal path: a new praxis of church governance. 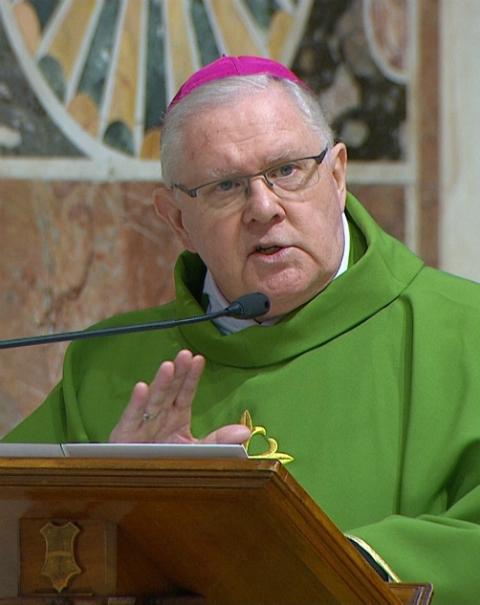 Archbishop Mark Coleridge of Brisbane, Australia, gives the homily during Mass at a meeting on the protection of minors in the church at the Vatican in February 2019. (CNS/Maria Grazia Picciarella)

This particular moment in Australian church history provides this document with an exceptional window of opportunity: It has provided here a model of synodal church governance that the global Catholic Church can embrace. At the same time, the Australian church is preparing another synodal path — in the form of a plenary council that will likely begin meeting in 2021.

Referring to our report, the Australian bishops issued a press release May 18 indicating that they received a report "into Catholic Church governance practices and possible reforms."

Brisbane Archbishop Mark Coleridge, president of the bishops' conference, announced: "To do it justice, the bishops will now take advice, consider the report in depth, conduct discussions at a provincial level, and otherwise prepare for a full discussion at their November plenary. This will allow them to then publish the report and respond to it."

Coleridge noted also that the report, dealing as it does with so many aspects of church governance, will necessarily become a significant contribution to the ongoing work of prayerful reflection and discussion leading up to the two planned assemblies of the plenary council.

The stakes are very high. "The Light from the Southern Cross" can help the church find a way out of the abuse crisis: not only in Australia, but across the world.

[Massimo Faggioli, a professor in the department of theology and religious studies at Villanova University, is one of four experts in the external advisory committee that collaborated in the document "A Light from the Southern Cross: Promoting Co-Responsible Governance in the Catholic Church in Australia."]