It can be relatively mild criticism or open revolt, complete with street demonstrations. It can be gentle or scathing. In modern management speak it is called pushback.

Whatever the term, corporate leaders and politicians can only take so much. When a bishop decides that change is needed in his diocese that is sure to generate pushback, he will frequently call on John Reid, a soft-spoken consultant from Seattle who has been managing the process of diocesan change for more than 20 years.

Reid is hired by bishops to help manage the regular process of closings, mergers and consolidations that have affected dioceses throughout the Northeast and the Midwest, as the church responds to declining numbers of parishioners and priests in the American Catholic heartland.

The news has come in batches: scores of parishes have been merged and closed in archdioceses and dioceses in recent years, including Detroit, Boston, Cleveland, Hartford, Philadelphia and New York. Few dioceses in the Northeast and Midwest have gone unscathed; if they have so far avoided massive consolidation, many expect it is just a matter of time.

Cardinal Timothy Dolan of New York has noted that the church in the United States was largely built in the 19th century. It will have to change to reflect 21st-century realities, better reflecting where Catholics live and work today.

Few doubt the need for change, yet sometimes the response is scathing. Reid tells the story of a bishop spat upon in one Midwest parish after a Polish-language Mass was ended. Sometimes, the reaction is more muted: mass demonstrations after church closings in the New York Archdiocese last year, a process which his firm consulted on, did not materialize. Sometimes, there is a positive reaction, said Reid, as a pastor claims there is more energy in a merged parish where the pews are 90 percent full than in a struggling church where the seats are largely empty.

It's hot outside but the air conditioning is on full blast in the Chancery offices of a diocese where Reid is serving as a consultant. It's the start of two long days. The indoor coolness helps keep everyone alert and awake, coupled with ample coffee. He has gathered 30 diocesan leaders, including priests, sisters, and lay directors of religious education and pastoral ministry.

They are gathered together to make recommendations on parish life in the diocese. We'll call it the Diocese of Midvale, located somewhere east of the Mississippi. Midvale is a medium-sized diocese where the bishop six months before announced a major change in parish life, including dozens of mergers and consolidations, with a call for remaining parishes to share their resources with each other.

The issues to be discussed are sensitive to those involved, and NCR was granted access to the meeting on condition that the diocese not be identified. While the concerns veered occasionally to the highly-sensitive, most issues involved concerns common to many dioceses experiencing the pangs of transition. Midvale is definitely not unusual in that regard.

Reid tells the committee, which will be divided into smaller groups to make recommendations on more than 100 parishes, that he is looking for "positive energy." The goals, he says in a style reflective of the gentle tones of the late Fred Rogers, have been set by the bishop: to strengthen parishes; explore new models of ministry for institutions such as hospitals and prisons; improve stewardship and increase parish income; assist parishes in working together with nearby parishes, and provide for pastoral ministry to immigrant minorities, particularly Latinos.

The bishop addresses the group. Reid notes that his address sets the tone. He wants the bishop to encourage the deliberations and be supportive, but he should get out of the way when the discussions begin, to assure candor (almost everyone involved is a diocesan employee). The bishop notes that this implementation committee is part of a two-year process that began with discussions more than a year ago over the future of parish life in the diocese. The decisions on closures and mergers were made six months before; now it is time for this group to make recommendations on how the plans will be carried out.

"You can't put a price on the process," the bishop tells the group, stating that Reid's consultancy fees have been well worth the price. He emphasizes that "parishes are not islands. They are part of a bigger thing," namely the diocese. It is clear the bishop has final say on all decisions, but participants are assured their recommendations will be taken seriously.

Participants are told by a chancery official to strike the right tone in their deliberations. Be specific, they are reminded. This is not to be a venting session; if there are issues, specific solutions need to be suggested.

"We are not asking you to rubber stamp anything," he says. And, he notes, the discussion will wander off into the trivia of parish life, including Mass schedules, fundraising, and the size of Sunday school classes. "There are no small things," he says.

The small groups, or cohorts, are then sent off to make recommendations that will govern parish life in the "Diocese of Midvale."

Some background: The diocese consists of one major city but is largely suburban in nature. It also contains a popular resort area, which swells in population in the summers but declines drastically each winter. Its major city has struggled in recent years and is known for being a center of poverty. Its suburbs contain both prosperous large towns and scattered villages that used to be manufacturing centers, as well as bedroom communities that serve commuters who work in larger cities outside the boundaries of the diocese.

One group discusses the impact of recent changes in a region which transformed five parishes into three. "There's a lot of emotion," says one priest participant, noting how Catholics in the area, a largely suburban region, have reacted. "There's a lot of hurt feelings," he says, noting he grew up in the area and knows what the discussions are like around the dining room tables in the homes of parishioners. 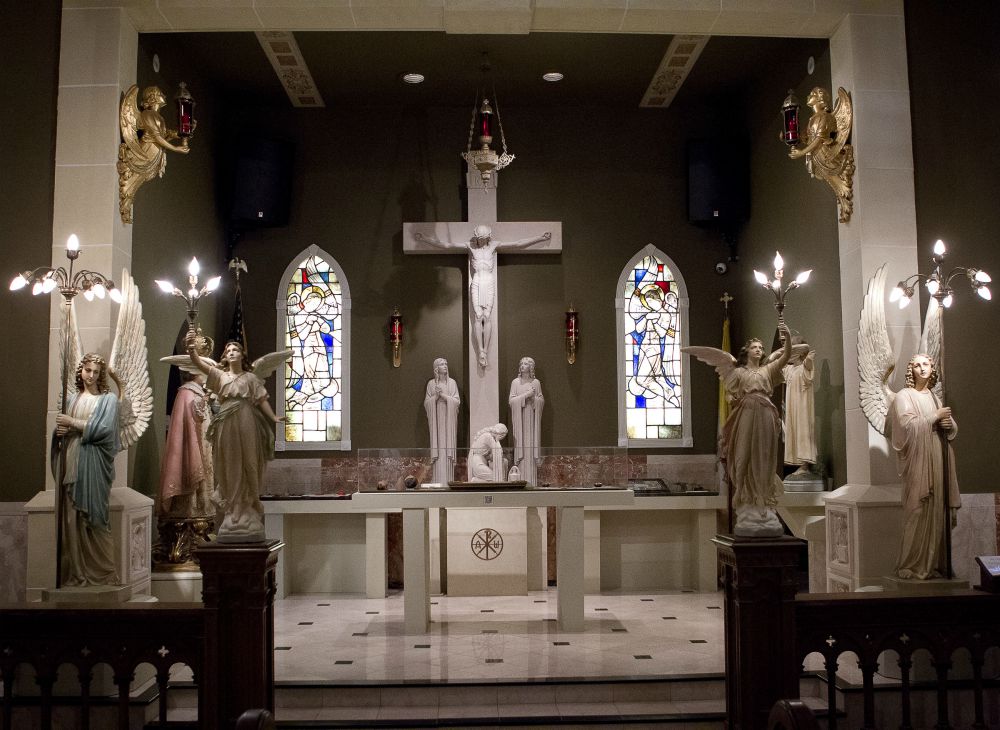 An example of how parish properties can be reused. A large marble crucifix overlooks the sanctuary of a former Catholic church that now is home to the Museum of Divine Statues in Lakewood, Ohio. The museum is run by artist Lou McClung, who opened it to preserve artifacts from closed parishes. (CNS photo/Dennis Sadowski)

The needs are varied: the outreach to Latinos needs to be strengthened. There is a hospital in the region where coverage schedules among the priests remain uncoordinated. Sometimes two priests will be called out in the middle of the night on the same emergency. One of the parishes has only about 50 children in religious education, an indication that the program might have to be merged with another parish program and a director of religious education to be let go.

Another cohort focuses on Catholic school education. The question is, per usual, who pays? Should Catholic schools be available only in affluent communities? How should parishes without schools support those parishes that sponsor schools?

In one school, about a fifth of the students come from a neighboring diocese, posing a problem because their families do not contribute to the Sunday collection of the sponsoring parish. A problem quickly surfaces about Catholic schools: the sponsoring parishes can no longer support them alone in many cases.

Another group deals with ministry to Latinos. It seems that the parish in a prosperous town has marginalized its Latino parishioners. Programs such as youth ministry, first Communion and religious education are geared largely to the more prosperous Anglo community.

"It's an us-versus-them view. They behave as two distinct communities," said a minister to the Latino community who is making a case to the cohort that something needs to be done.

In a resort community, some Latino parishioners remain bitter about a church closure that moved the site for their Spanish-language Mass nearly a decade before. Many have moved to an Episcopal congregation. "It left a lot of rancor," reports a priest.

Groups are reminded that the Midvale Diocese ministers to more than just Spanish-speaking immigrants. Ministry to Portuguese-speaking Brazilians continues to lag in many parts of the diocese. Questions arise about whether Polish and Italian communities, established decades ago for largely older immigrant communities, can be integrated into the lives of neighboring parishes. Those parishes have long learned to be on their own.

A regular theme among the cohorts are the rivalries among clergy, some of whom rarely cooperate with pastors in neighboring parishes. Autonomy issues — the question of who is in charge — plagues parishes in the process of merging or for those being asked to share resources.

An African American community's parish is being merged with another church in the diocese's largest city. A popular gospel Mass has moved around regularly and is expected to move again. Hard feelings have resulted.

"They feel unloved," notes a member of the cohort responsible for the city's parishes. (The group talking about this contains no black members, and while sympathetic to their concerns, they are conscious of being outsiders to the issues involved.)

The discussions go on for two full days. At regular intervals, recommendations are voted upon by the full committee. The proposals are largely uncontroversial and are approved unanimously. Upon approval, a bell is rung. A committee member raises a hand in dissent in one case, only to say he just wanted to mix it up, generating laughs from his fellow members.

Most of the sensitive areas are resolved via the small-group discussions. Parishes are asked to cooperate with each other on issues such as Catholic school funding, ministerial coverage of hospitals and prisons, and developing Latino and young adult ministry, two areas set aside for special attention. Specific action plans and timetables are approved.

The recommendations are sent to the bishop. A month later, committee members receive a memo from the chancery urging them to continue meeting to implement their recommendations with the parishes in their regions. The process remains ongoing; Reid says he expects it will take years.

Whatever happens will involve change. "You don't do planning for the status-quo. We do it in the context of change," Reid says.

Reid is convinced that change can be managed in the context of a post-Vatican II church that seeks the input of all, even if it maintains a structure of the bishop as final authority. Reid says he is a believer that "if good people get good information, let them do the evaluation." The fruits of the process will be seen in a Midvale Diocese better able to minister to a diverse population.

In the diocese, at least for now, a peace reigns and some broad consensus has emerged. The pushback has been incorporated and managed. Whether the process will inspire a renewed and revitalized church is a question yet to be determined.