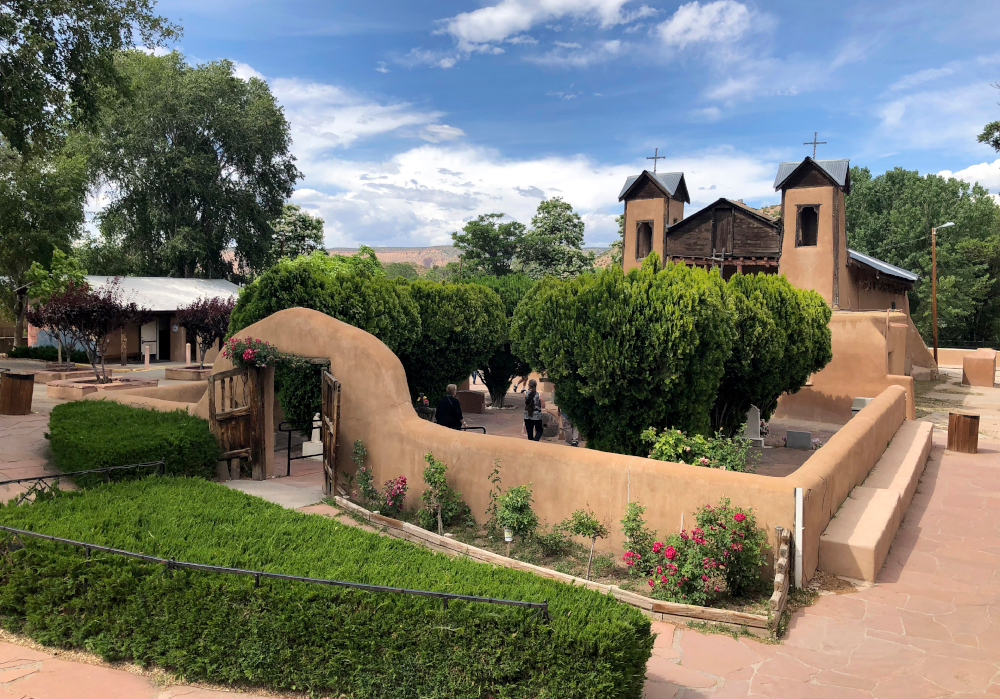 In this June 16, 2019 photo El Santuario de Chimayó is shown in Chimayó, N.M. El Santuario de Chimayó is known around the world for its healing sand and is the northern New Mexico shrine where believers ask for mercy and miracles to stage off sickness and death. But with the outbreak of the novel coronavirus, the sanctuary is one of many Hispanic Catholic sites around the country closing and limiting access to pilgrims seeking a last hope prayer. (AP/Russell Contreras)

For years, Orlando Marquez and his family made the pilgrimage to El Santuario de Chimayó, a Catholic sanctuary located in northern New Mexico and known as the "Lourdes of America." Healing sand from its "el pocito" possesses the power to cure illness and fight cancer, devotees believe. Pleas to fight addiction or keep a marriage alive are written on notes posted on the sanctuary's walls.

The 42-year-old Albuquerque realtor and mariachi musician this year wanted to ask God to protect the country from the novel coronavirus. He also planned to get some healing sand, just in case.

But with the outbreak of COVID-19, Chimayó is one of many historic Hispanic Catholic sites limiting access — or outright closing — to pilgrims seeking a last hope prayer. From a Denver Cathedral that houses the bones of a former black slave to the site of the reported first Thanksgiving in St. Augustine, Florida, Catholic dioceses are discouraging mass gatherings and halting traditional excursions to prevent the spread of the virus. Public Masses have been canceled and Holy Week events likely won't occur.

The cancellations come even as Catholics seek divine protection — in the form of healing sand, holy water or a direct prayer to a saint — from the pandemic.

"I wanted to pray. I wanted to self-reflect," said Marquez, who planned on going on the 13-mile (20.92-kilometer) pilgrimage with his 83-year-old father, a retired U.S. Air Force chief master sergeant. "I lost my mother 2 1/2 years ago, so this was important. It's tough, but I understand."

The Archdiocese of Denver announced that all public Masses had been canceled in Colorado, even at the Cathedral Basilica of the Immaculate Conception. The cathedral is home to the remains of Julia Greeley, an emancipated black slave who is under review for sainthood by the Vatican. Believers recently have come to the basilica to ask Greeley for miracles.

Phoenix Bishop Thomas Olmsted also suspended weekday and Sunday Masses in large parts of Arizona and asked parishes to cancel public gatherings. That affected visits to the Saint Peregrine Shrine in Mesa, Arizona, dedicated to cancer patients seeking miracles. Though he discouraged crowds of more than 10 people at a time, churches and chapels remain open for private prayer with social distancing protocols in place.

In Florida, St. Augustine Bishop Felipe Estévez suspended Mass to avoid gatherings of 10 or more people. Kathleen Bagg, a spokeswoman for Diocese of St. Augustine, said church officials were still in discussions about whether there would be any changes for visitors to the Shrine of Our Lady of La Leche. The shrine is the site of "Mass of Thanksgiving" — widely believed to be the First Thanksgiving in the present-day United States, more than 50 years before the Pilgrims celebrated at Plymouth Rock, Massachusetts, in 1621. It's also known for helping couples conceive and expectant mothers with complicated pregnancies.

And late March 18, Brownsville, Texas, Bishop Daniel E. Flores announced that he has suspended all Masses, festivals, retreats and educational programs. He also ordered all churches to be closed to the public, including the Basilica of Our Lady of San Juan del Valle in San Juan, Texas. Millions visit the shrine annually to atone for wrongs and ask for miracles on behalf of the sick.

Allen Sanchez, executive director of the New Mexico Conference of Catholic Bishops, said the sites are sacramental and help Catholics with their faith. "But this is going to change the way we think," Sanchez said.

And Catholic healing sites around the globe also have been affected. The French Shrine of Our Lady of Lourdes announced it would close for the first time in more than a century following new restrictions in France. The water that flows from a spring in the Grotto of Massabielle and into the sanctuary is believed to cure those who drink or bathe in it.

The Basilica of Sainte-Anne-de-Beaupré in Quebec, Canada, also has canceled all public Mass services. However, the basilica remained open for eight hours a day for visitors. Devotees believe the church, built to honor Saint Anne, the patron saint of sailors, is responsible for many miracles of curing the sick and those with disabilities.

The Archdiocese of Santa Fe said this week in addition to asking for limited gatherings at Chimayó, it was also postponing pilgrimages to Tomé Hill, the location of Crosses and a shrine on top of a hill in central New Mexico.

"Individual pilgrims visiting Santuario de Chimayó are strongly discouraged from visiting the sacred shrine because of the increased risk of contracting COVID-19 and passing it on to another who may be gravely harmed," the archdiocese said in a statement. Chimayó attracts 300,000 visitors a year.

Not all healing and sacred sites have adopted restrictions — yet. For example, the Basilica of Our Lady of Guadalupe in Mexico City, one of the most sacred Catholic sites in the Americas, still is accepting visits, though people are asked to wash their hands.

Still, Virginia Commonwealth University's Chesnut said more people would be fearful about going out in public and turning to post prayers online.

Michele Lee Benavidez, a program manager for the New Mexico-based Catholic Foundation, recently skipped visiting El Santuario de Chimayó because of the virus and drove by. She planned on posting a prayer on an app. "It's just sad because these small communities rely on the tourism from these pilgrimages," Benavidez said.

Sanchez said there would be plenty of time for people to rally around affected communities. For now, Catholics had to do what they could to protect themselves and their fellow neighbors by self-isolating.

"The holiest place right now is not Chimayó," Sanchez said. "It's your home."