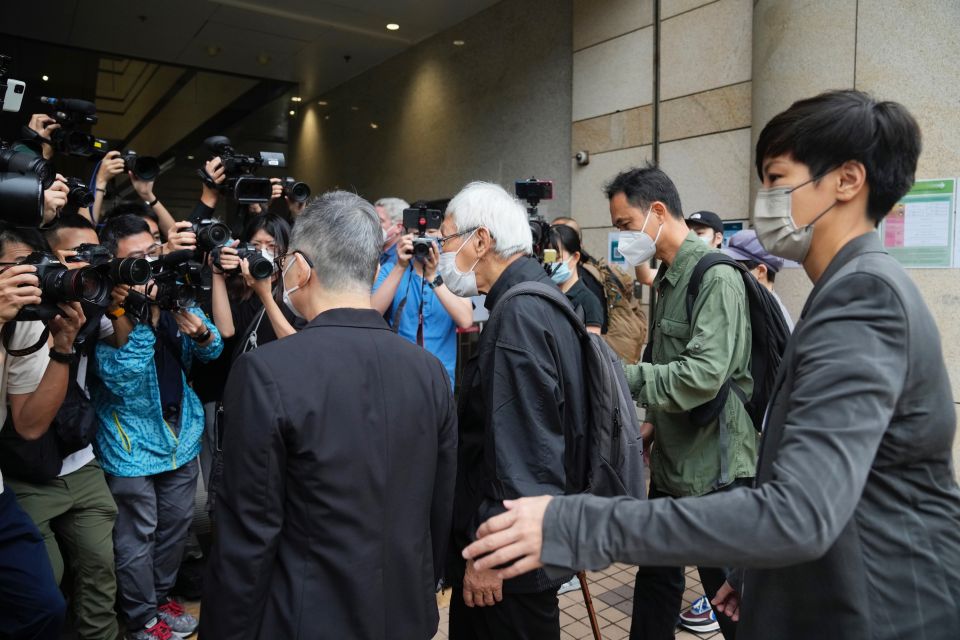 From right, Hong Kong singer Denise Ho, Hong Kong scholar Hui Po-keung, Catholic Cardinal Joseph Zen and barrister Margaret Ng and arrive for an appearance at a court in Hong Kong as they were charged in relation to their past fundraising for activists, Tuesday, May 24, 2022. (AP Photo/Kin Cheung)

The six, which also include singer Denise Ho and former opposition lawmakers Margaret Ng and Cyd Ho, were first arrested two weeks ago on suspicion of collusion with foreign forces but were not charged.

They appeared at Hong Kong's West Kowloon court Tuesday. Zen and the five others were trustees of the now-defunct 612 Humanitarian Relief Fund, which was set up in 2019 to assist protesters who required financial assistance with legal or medical costs.

They were charged with failing to register the fund as an organization with the police — an offense that could incur a fine of up to 10,000 Hong Kong dollars ($1,275).

The trial will begin Sept. 19, and will take place over five days.

Cardinal Zen's arrest was condemned internationally, with the Vatican saying that it was monitoring developments.

The charges against the six comes as Hong Kong launched on crackdown on political dissent in recent years.

The police launched an investigation into the fund on national security grounds in September 2021. A month later, the fund said it would stop operating, citing the city's deteriorating political environment.

Scores of pro-democracy activists have been arrested under a sweeping National Security Law imposed on the city by Beijing in 2020 following the demonstrations, including veteran lawmaker Martin Lee and publisher Jimmy Lai. The law outlaws subversion, secession, terrorism and foreign collusion, and has since been used to arrest over 150 people in the city.

Pro-democracy news outlets such as Apple Daily and Stand News have been forced to shutter following national security investigations. Electoral laws have also been amended to ensure that only "patriots" are allowed to govern the city, effectively preventing pro-democracy supporters from taking office.