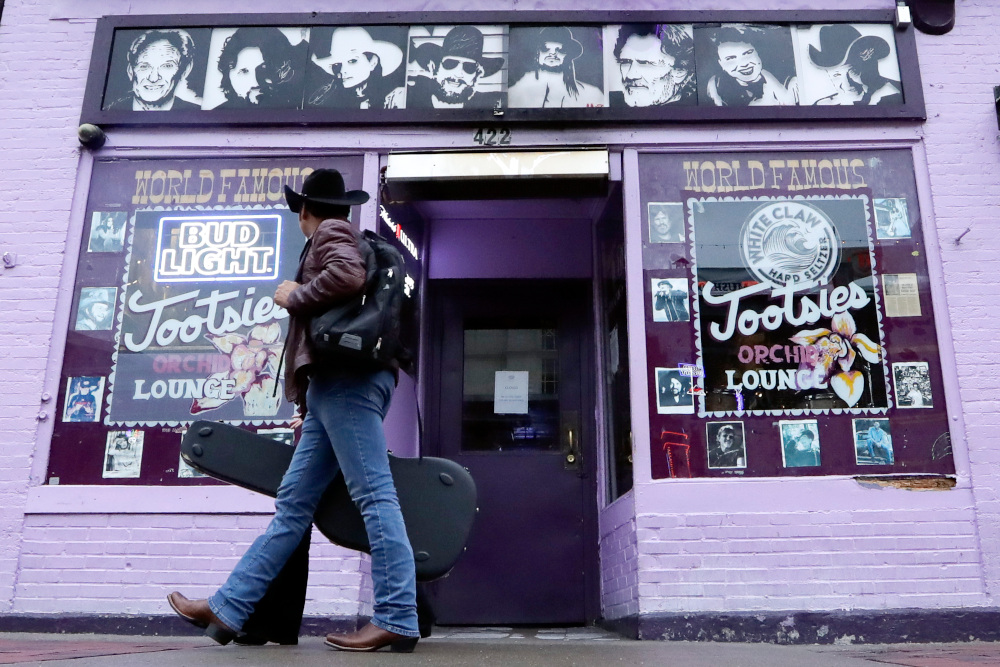 A man walks by Tootsie's Orchid Lounge, closed because of the coronavirus, Monday, March 16, 2020, in Nashville, Tenn. Nashville Mayor John Cooper has called for bars on Broadway and throughout the county to close until further notice. He also asked restaurants to limit seating to 50 percent of capacity, with a cap of 100 people, and restaurant bars to not allow standing. (AP Photo/Mark Humphrey)

The United Methodist Church has long promoted abstinence from alcohol.

But that didn't stop City Road Chapel in the suburbs of Nashville, Tennessee, from announcing a Bar and Restaurant Workers Help Fund this week to assist locals whose food-service jobs have been impacted by the coronavirus outbreak.

"The reality is we're a community-based church, and we've been located here for over 100 years," said the Rev. Jay Voorhees, City Road's lead pastor. "Many of the folks we serve are in the restaurant and bar business. So this is just a continuation of the normal command to love your neighbor."

City Road has a relationship with a bar down the street that closed down in accordance with the city's recommendation to mitigate the spread of the virus, leaving staffers without a livelihood. Voorhees' own daughter works in restaurant management and had to lay off staff because of the coronavirus situation.

Across the country, houses of worship like City Road and other faith organizations have shut down their in-person services but are mobilizing to assist vulnerable community members who require assistance with grocery shopping, paying bills, picking up prescriptions and other tasks during the outbreak.

A poll conducted last week found that 18% of U.S. households already reported someone being laid off or having hours reduced because of the pandemic. Experts say it's likely just the beginning of a massive economic downturn.

"In the midst of this crisis, we're all having to rethink what it means to be church," Voorhees said. "Church has been defined so often by what happens on Sunday morning when people show up for worship. ... We're trying to find the balance between keeping our people safe, keeping everybody safe, and being available to help those in need. This fund is one way we'll do that."

The church, which has received about $500 and five requests for assistance so far, will provide grocery store gift cards to local residents who can provide letters from former employers saying they have been laid off due to the pandemic.

Another campaign, led by three Muslim organizations, has raised over $220,000 for low-income families to put toward food, bills and any other living expenses that will not be covered as a result of quarantines or work and school closures. Funds from the LaunchGood crowdfunding campaign will also be used to provide hygiene kits for low-income families and provide grants to local organizations coordinating similar relief projects.

Organized by CelebrateMercy, Penny Appeal USA and the Islamic Center at New York University, the effort was launched March 14, originally asking for $20,000. Organizers bumped up their fundraising goal after donors put forward more than $75,000 within a day. So far, they have received more than 300 requests for financial aid.

"As American Muslims, we wish to respond to hardship with hope, as our faith instructs us, and send a message of compassion through action – serving our fellow Americans – of all faiths – who are facing distress and uncertainty right now," said CelebrateMercy's director Tarek El-Messidi. "Our Prophet Muhammad, peace be upon him, said: 'The most beloved people to God are those who benefit people most.'

"We pray that these hardship grants will help lessen the burden that too many hard working American families are feeling," El-Messidi said. 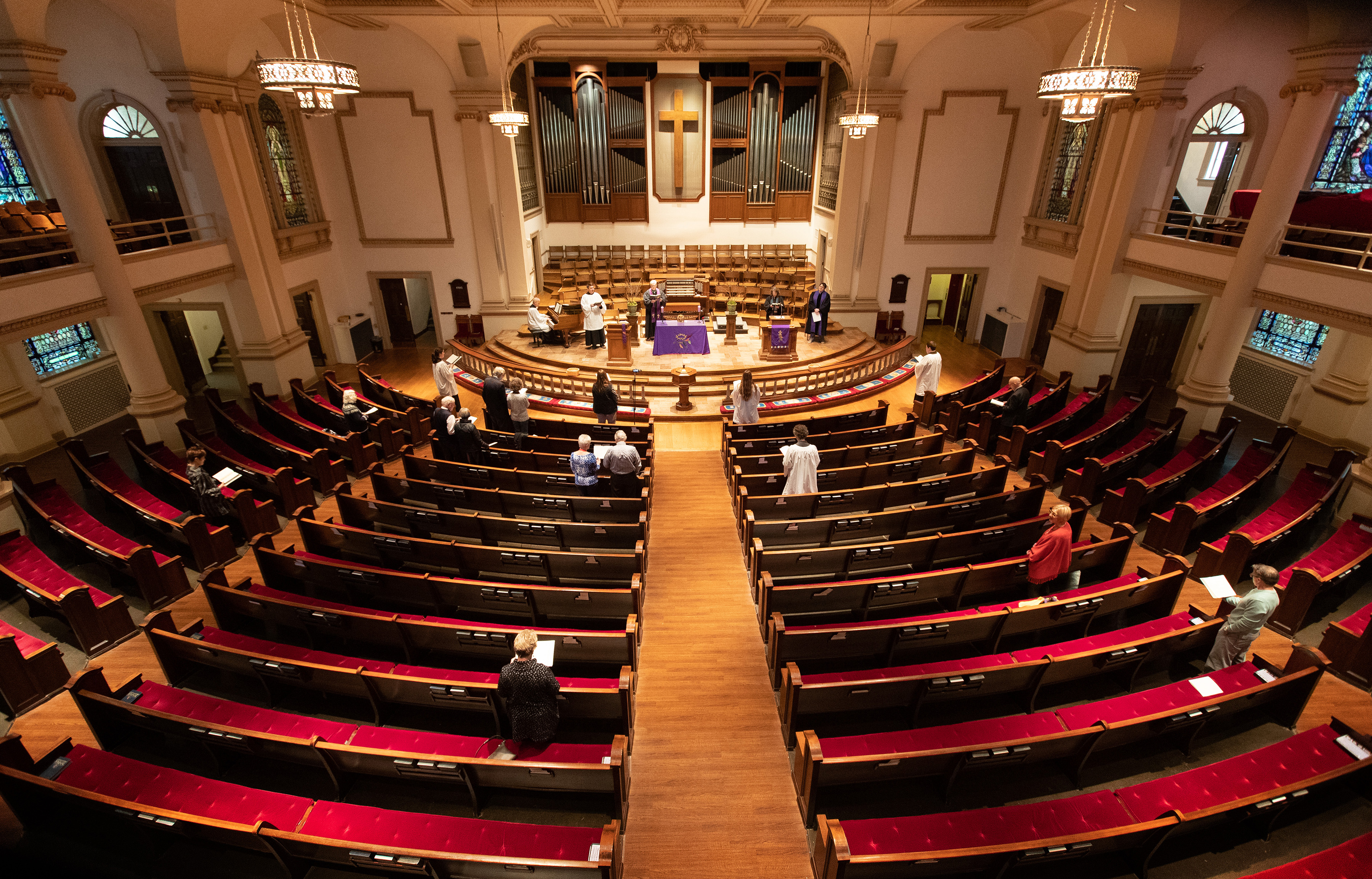 Members and leaders of Belmont United Methodist Church in Nashville, Tenn., worship in a mostly empty sanctuary Sunday, March 15, 2020, after church leadership encouraged people to worship from home via video livestream in response to the coronavirus. (AP/UM News/Mike DuBose)

That same spirit is behind the Islamic Circle of North America Relief' s grocery delivery service for families needing assistance in and around Washington, D.C. The aid group recently opened a special pantry in Boston to provide hygiene and household items to those who can't afford it.

The Muslim Community of Ann Arbor, Michigan, created a dedicated zakat fund for those who cannot work during the outbreak. The Ahlulbayt Mercy Foundation is providing food baskets to families in need, and a group of Muslim youth in South Carolina also made headlines for their work providing groceries and other essentials to local charities.

The need appears to be growing ahead of actual cases, as schools are shuttered and layoffs begin. Georgia's New Birth Missionary Baptist Church's new food pantry has already fed more than 1,400 people this week. Philadelphia's New Kingdom Baptist Church has opened  its basement to provide free hot meals for children and families over the next two weeks. New York City's Trinity Community Connection church is raising funds to keep its Harlem shelter for homeless LGBTQ youth open 24/7 during the outbreak.

Milwaukee's Life Church is distributing meals to the local public school system and offering delivery to members in need. Florida's Lake Gibson Church of the Nazarene is holding a "PB & Jesus" food drive event all week to collect food donations and prepare hundreds of meals for children at a local elementary school.

Other groups are focusing on providing for those isolated at home. At Colorado's Cherry Hills Church, Texas'  Milestone Church and Ohio's Centerburg Church of Christ, staffers are reaching out to congregants who are unable to get out for groceries and other supplies.

At Congregation Beth Jacob in Redwood City, California, clergy and volunteers set up a canned food drive and their own food delivery service and created a spreadsheet of grocery delivery services that are still in operation in their area. They've also created a community phone chain to have members touch base with each of their contacts.

"We want to show our concern and make sure people don't feel isolated, even if they're in isolation," said Kendra Livingston, a member who helped organize the synagogue's program after reading a viral Twitter thread about an elderly couple who were afraid to risk going into a store. "We've never mobilized like this in the past, to my knowledge. We've gotten a bunch of community members who are saying, 'Hey, I'm young and healthy, I don't have kids, how do I help?'"

Other synagogues have begun expanding existing support systems for congregants with new children or who are sitting shiva, now delivering groceries and setting up phone check-ins with elderly members and those in self-isolation.

In Britain, United Synagogue set up a daily phone help line to assist community members, and the Board of Deputies of British Jews sent out "I can help" cards for community members to post through mailboxes to those who are self-isolating.

"We need to dig deep to find the faith, strength and resources to get through," Board of Deputies President Marie van der Zyl said. " ... We need to find coping mechanisms to deal with the new scale of challenge. The Jewish community has always been resourceful and giving to those both inside and outside our community and will continue to do so. We need to stick together even though we may be physically apart."