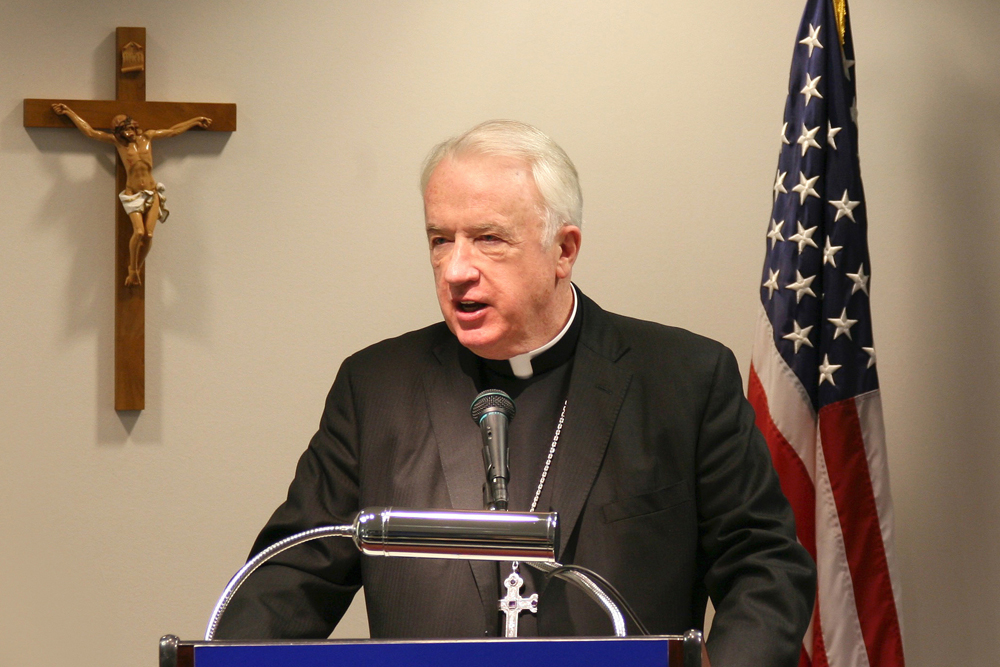 In this 2017 file photo, Bishop Michael Bransfield, then head of the Diocese of Wheeling-Charleston, West Virginia, is seen at Wheeling (CNS/Colleen Rowan, The Catholic Spirit)

A thousand dollars a month in liquor. Daily fresh flowers delivered to the diocesan office, costing up to $182,000 over 13 years, and $350,000 in gifts to priests, bishops and cardinals spread around the country and at the Vatican.

While Bishop Michael Bransfield led the Diocese of Wheeling-Charleston, West Virginia, with its reputation as a poor, isolated church, it's the details of high living that spring out from an investigative report, details of which were published by The Washington Post June 5.

The report, directed by Archbishop William Lori of Baltimore, describes Bransfield ordering $4.6 million of renovations on his house in Wheeling and conducting a regular pattern of sexual harassment of seminarians and priests under his authority.

In a letter June 5 to the people of the diocese, Lori said that the report found that the accusations of sexual harassment were credible but did not involve minors. The investigators discovered that Bransfield tapped diocesan funds to pay for an opulent lifestyle that included paying for drug and alcohol abuse and extensive leisure travel.

"There is no excuse, nor adequate explanation, that will satisfy the troubling question of how his behavior was allowed to continue for as long as it did," Lori wrote. In the letter, Lori acknowledged being a recipient of $7,500 in gifts from Bransfield, money which he said would be donated to Catholic Charities. He also said that Bransfield's Wheeling house will be sold with the proceeds used to support sex abuse survivors.

As the U.S. bishops meet in Baltimore June 11-14, they are expected to vote on a "metropolitan" plan to discipline transgressing bishops. A vote on that plan, which calls upon archbishops to discipline wayward bishops with the assistance of lay review boards, is a crucial part of the agenda. Lori's investigation is seen as a model of how that could work in practice.

The Diocese of Wheeling-Charleston benefitted from the proceeds of oil extracted from Texas property it was bequeathed in the early 20th century. The diocesan endowment, according to the Post, is valued at $230 million. Bransfield, according to the report, would be reimbursed with increases to his salary to pay for the gifts.

Until the Post story was released, details about Lori's report were held in confidence. In comments on the Post story, Lori said that it was unfair to release the names of the recipients of Bransfield's gifts, since they were unaware of his questionable financial activities.

Lori submitted the report to the Vatican, with a public announcement via a March 11 press release that offered few details. The report was compiled by five lay experts, who looked into alleged sexual harassment and financial improprieties. The release said the team interviewed over 40 individuals, including Bransfield.

"My charge to the investigative team is simple: follow the truth wherever it leads," Lori said in announcing the investigation last fall. The report confirmed what opponents to Bransfield in West Virginia already suspected.

"Bransfield's lavish lifestyle and flaunted political allegiances marked his episcopacy with signs of clerical privilege and entitlement that are the root cause of abuse by members of the priesthood, including sexual misconduct," wrote Jeannie Kirkhope and Michael Iafrate, co-coordinators of the Catholic Committee of Appalachia, in a column published by West Virginia newspapers before the Washington Post article.

The protests against Bransfield have been small yet steady. A symbolic protest at Lori's Chrism Mass this past Holy Thursday was held at the Wheeling's St. Joseph Cathedral. Some West Virginia Catholics have replaced their church envelopes with "Stop Paying Bransfield" notes placed in the collection basket. (Bransfield's salary as bishop emeritus of the diocese is still being paid).

"People are not feeling good about giving money in this situation," Jessica Wrobleski, a former theology professor at Wheeling Jesuit University, told NCR. In 2017 the diocese purchased the long-term debt of the college, and the school has now been restructured, with many fewer programs. Among programs cut were the theology department, with Wrobleski being among those laid off.

The uncertain status of the college, and lawsuits alleging kickbacks to doctors from Wheeling Hospital, a Catholic institution, plagued Bransfield's tenure. There has been a cascade of actions swirling around the diocese over the past year, including a lawsuit instituted by West Virginia Attorney General Patrick Morrisey, claiming the diocese failed to fully notify the public about the presence of priest and Catholic school sex abusers; a lawsuit by a former seminarian accusing Bransfield of sexual harassment, and the removal of Bransfield's name from the gymnasium of Central Catholic High School in Wheeling. The diocese has denied the charges filed by the attorney general.

The Diocese of Wheeling-Charleston last year released the names of 31 priests it said were credibly accused of sex abuse. Bransfield was not on that list. The diocese later added another nine names.

Kirkhope, co-coordinator of the Catholic Committee on Appalachia, noted that alleged victims of Bransfield have been reluctant to be identified. Some former and current diocesan employees told NCR they feared for their jobs if they said anything.

"Everybody is trying to destroy my reputation. These people are terrible to me," Bransfield told the Post. But he said he could not comment on the specific allegations.

Bransfield is now living near his Philadelphia hometown, and has been banned from exercising priestly ministry by Philadelphia Archbishop Charles Chaput. Lori has suspended him from ministry in the Diocese of Wheeling as well as the Archdiocese of Baltimore. Bransfield was ordained for the Archdiocese of Philadelphia in 1971 and served as rector of the Shrine of the Immaculate Conception in Washington from 1990 to 2004, before being named to Wheeling-Charleston.

The story has its roots in West Virginia, known for its isolation, relatively few Catholics, and lack of media coverage. The state has some 78,000 Catholics and is one of the most impoverished in the country. For Kirkhope, the diocese being run out of Baltimore, with Lori as apostolic administrator, is an untenable situation, reinforcing the sense that West Virginia's Catholics are being left behind.

"If this were to happen in San Francisco or Detroit, it would be all over the place," she told NCR.

[Peter Feuerherd is NCR news editor and is a professor of journalism at St. John's University, New York.]

Related: Lavish living by Catholic hierarchy is moral corruption
A version of this story appeared in the June 28-July 11, 2019 print issue under the headline: Investigation into Bransfield finds harassment, misuse of funds.