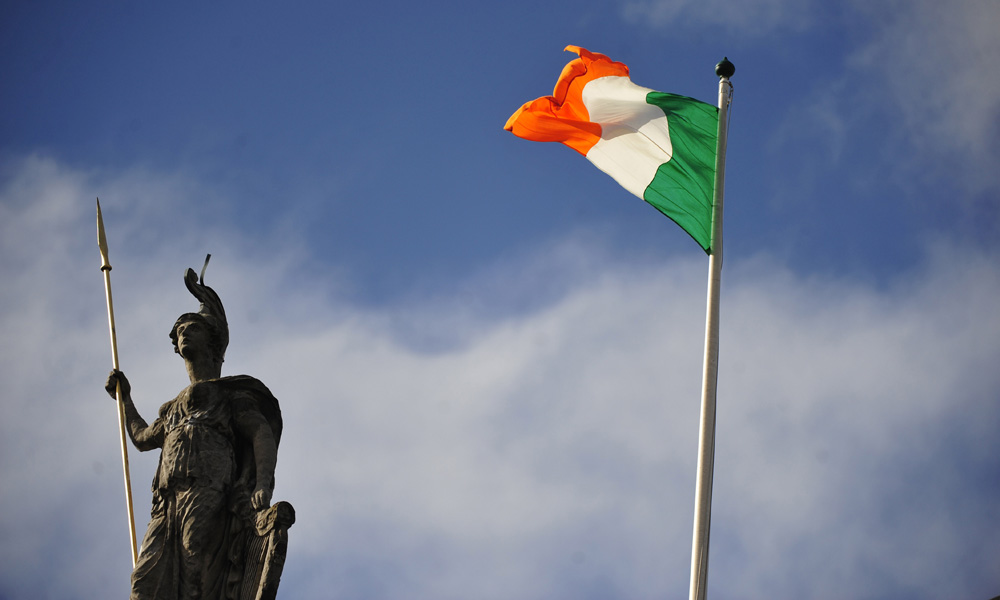 The Irish flag is seen in late March 2016 on top of the General Post Office in Dublin. (CNS/Aidan Crawley, EPA)

Irish priests frustrated with their bishops' treatment of them could resort to a High Court action to pressure religious leaders into respecting their rights, the annual general meeting of the Association of Catholic Priests in Ireland was told in November.

The conference, held in Athlone, the geographical center of Ireland, was attended by about 200 priests of the association's 1,000 membership.

A new wallet-sized information card which outlines priests' rights when they are called to a meeting by their bishop or religious superior was unveiled by the association's leadership. The card is primarily aimed at priests who find themselves the subject of an abuse allegation.

Fr. Tim Hazelwood of Cork, who is a member of the leadership team, was falsely accused of sexual abuse by an anonymous complaint in 2009. He was vindicated by the High Court in 2016 and his accuser was ordered to pay compensation to a charity for his false allegation. According to Hazelwood, there is no consistency across dioceses and religious orders in the way accused priests are treated. 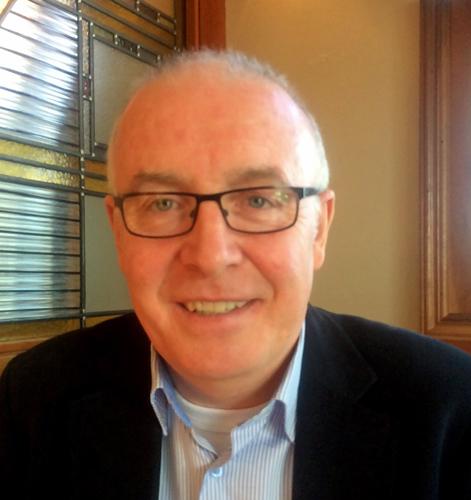 He believes this is partly due to the fact that a 43-page guidance on the Care and Management of Respondents, which was drawn up as one of the seven safeguarding standards produced by the National Board for Safeguarding Children in the Catholic Church, hasn't been ratified by the Irish bishops and religious orders, and therefore remains only a guidance which can be ignored.

The association hopes that the new information card will tackle priests' vulnerability when they are summoned by their bishops or religious superiors by reminding them of their basic rights. These include the right to remain silent, the right to know why a meeting has been called, and the right to a canon or civil lawyer. An accused priest also has the right to be accompanied by a third party that can take notes at the meeting. The association is advising its members not to sign anything or give any verbal undertaking at the meeting.

Hazelwood told NCR that concern had been expressed to the Association of Catholic Priests by 253 priests at seven regional meetings across the country, ahead of the general meeting about this issue.

"In many dioceses, priests felt that they were unfairly treated; we were disturbed by what we heard. They need clarity on protocols because some priests feel bullied," he said.

The regional meetings also raised priests' concerns over the vagueness around the funeral rites of priests who have stepped down from ministry.

"What is happening now is that priests are being brought in; they are promised that they will be helped," Hazelwood said. "Sometimes those who find themselves being accused don't think right; their thinking process is gone. At this initial meeting, the bishops or superiors record what they say and how the priest reacts. Later, a management group decides whether the priest should stay in ministry or not, and a lot of the evidence they use is from that initial meeting — so a priest's vulnerability is used."

Standard 4 of the National Board for Safeguarding deals with the care and management of respondents who have been accused of abuse. But unlike the other safeguarding standards, this one is not audited for compliance by bishops and religious superiors.

"We are all very much aware of the standards that are there for protecting children but Standard 4 on the rights of priests is ignored," Hazelwood said. "It has not been ratified by the bishops or the religious superiors — they have just ignored it. It is just sitting there and it has no credibility. We are asking that this guidance document be ratified."

"If the advice being given to priests is in line with civil law then there should be no objection to it."
—Marie Collins

Marie Collins, who was abused by a priest of the Archdiocese of Dublin in the 1960s, and resigned from the Vatican's Commission for the Protection of Minors in March due to resistance in the Roman Curia towards the commission's reforms, commented to NCR, "All the standards in the guidance should be ratified by the bishops unless they have a good reason to object, in which case they should make their reasons public."

"I have always supported justice for all," Collins added. "This includes those accused of perpetrating abuse." She acknowledged that it is "extremely difficult to find the balance so everyone's rights are protected. It is much easier for a victim if the accused is willing to admit his guilt but he does have a right in civil law to remain silent. I don't think in justice you can treat a priest any differently from any other accused. If the advice being given to priests is in line with civil law then there should be no objection to it."

Hazelwood met members of the national board recently and said they were surprised when they heard that priests were unhappy.

"I explained that some dioceses and orders adhered to the protocols in their dealings with priests accused of abuse while others appeared to be making it up as they went along," he said. "What we are asking for is fairness. The justice that this document allows us. A lot of priests are living in fear — they are terrified of being wrongly accused."

Though Hazelwood was vindicated in his High Court action, he is "still fighting for the diocese to recognize the wrongs that were done." He believes that had the national board guidance on accused priests been available to him in 2009, it would have helped.

"All I want to know is can we learn from the way we do things and can we have better protocols," he said. "We are not asking for anything extra, we want the same rights as is afforded to any ordinary citizen."

Solicitor Robert Dore successfully conducted Fr. Kevin Reynolds' defamation action against RTÉ Television, the national broadcaster in Ireland, over its 2011 program "Primetime Investigates: Mission to Prey," which wrongly accused the missionary priest of raping and getting a teenage girl in Kenya pregnant. DNA tests proved that the allegations were false. Dore has acted for a number of priests falsely accused of abuse and was presented with a special honor by the Association of Catholic Priests at the November meeting.

He made an intervention during the proceedings stating that the wrongful treatment of priests by their superiors is "an issue that must ultimately be tested."

"If I came across one of your members and formed that view that the manner in which he had been treated was absolutely manifestly wrong, I think it would be worth a shot at instituting High Court proceedings," he said, adding, "But it would be fought tooth and nail by the hierarchy."

The Association of Catholic Priests currently is arranging for priests who believe they have been wrongly accused to get counselling. Hazelwood refers to nine priests who have taken their lives in the last 10 years in Ireland. The public perception is that once a priest is accused, he must be guilty, but both he and Reynolds are testimony to the fact that there are false accusations.

"For a priest, it is the end of the road," Hazelwood said. "I was one of the lucky ones — it was false. If the person who made the accusation against me had come forward, instead of making the allegation anonymously, I wouldn't be in this situation now. Everything is against you and to clear your name is very difficult." 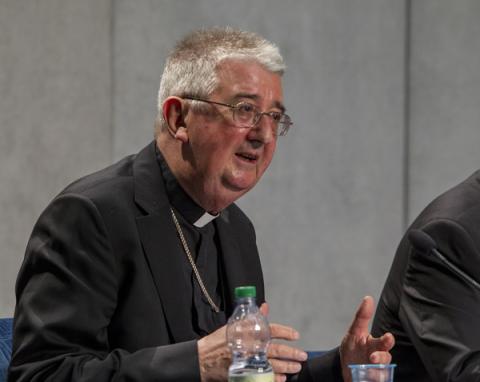 Irish Archbishop Diarmuid Martin of Dublin answers questions at a Vatican news conference on the theme chosen for the 2018 World Meeting of Families, which his archdiocese will host. (CNS/Robert Duncan)

Dublin Archbishop Diarmuid Martin said he had "no objection" to priests having a card like the one issued by the Association of Catholic Priests in an interview with Newstalk Radio's "The Pat Kenny Show," ahead of ordaining two new priests for the Archdiocese of Dublin.

"I think it is important that the norms that are there are correctly followed, and if there are cases where they are not followed, then people have a right to come forward or bring their friend or the Association of Catholic Priests to say, look in this particular case this isn't what happened," Martin said.

Having seen the card, he said that in the Archdiocese of Dublin, "we've followed very strictly these guidelines in which a person has got support. We pay for canon and civil lawyers for any priest who is accused up to the moment at which he may be formally incriminated; we've done that all along."

Martin admitted that as a bishop and as a person, "It is a horrific experience for me to have to speak to a man who has been accused and watch the reaction, whether that accusation be true or false — certainly if it is false it is a real tragedy."

But most of the cases that are coming to light today relate to what Martin termed "known faces" — a group of "10 to 12 serious pedophiles who were active in Dublin diocese over a long period of time."

Meanwhile, the Association of Catholic Priests organized its first "Healing Circle" on Nov. 28. The initiative was suggested by Dr. Marie Keenan, a psychotherapist specializing in sexual violence and abuse, who believes such healing circles will help priests grieve collectively "for the church they once knew, for the priesthood they originally entered, for the congregations they once served, for the relations with bishops and superiors they once lived."

Read this next: Irish priest warns of depression among overworked clerics