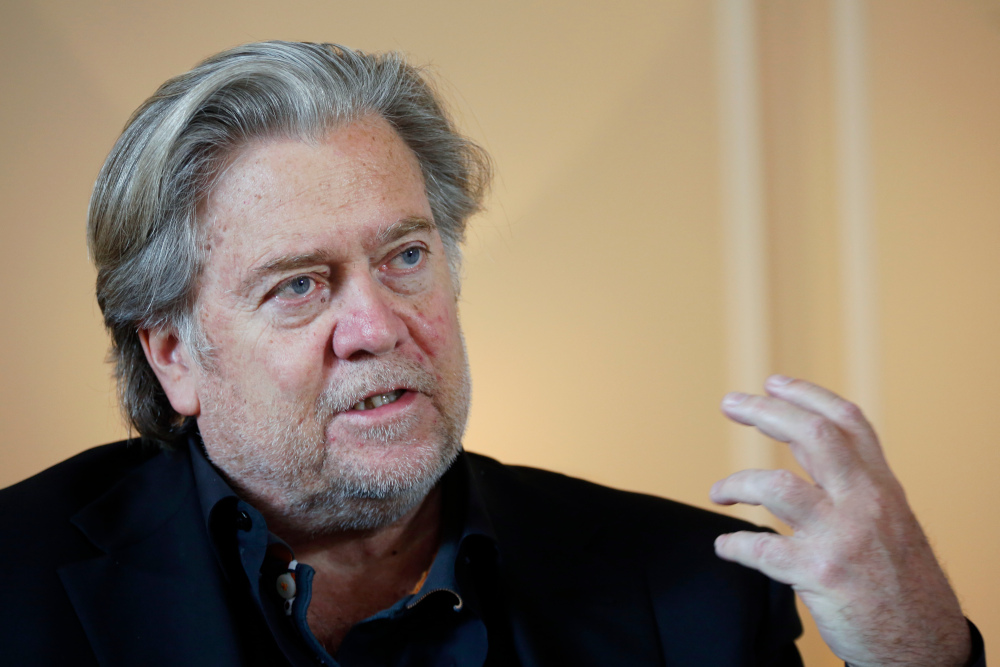 In this Monday, May 27, 2019 file photo, former White House strategist Steve Bannon poses prior to an interview with The Associated Press, in Paris. Italy’s top administrative court, the Council of State, has ruled Monday March 15, 2021, against a conservative think tank affiliated with former White House adviser Steve Bannon over its use of the Certosa di Trisulti monastery, located in the province of Frosinone south of Rome, to train future populist leaders. (AP File/Thibault Camus)

Italy's top administrative court has ruled against a conservative think tank affiliated with former White House adviser Steve Bannon over its use of a 13th century hilltop monastery to train future populist leaders, a decision Bannon denounced March 16 as a politically motivated "joke."

The Council of State ruled that the Culture Ministry was correct in cancelling the concession it had given to the Dignitatis Humanae Institute, or Human Dignity Institute. The court found that the institute had lied when it bid for the lease of the monastery in 2017, claiming it had qualifications to run it that "subsequently were shown to be not true."

The ruling overturned an earlier decision by a regional administrative tribunal that had sided with the institute.

Buoyed by Donald Trump's 2016 victory and the rise of nationalist sentiment in Europe, Bannon and the institute had launched plans to establish an academy to train populists and nationalists at the 13th century Trisulti monastery, an abbey surrounded by a forest in the province of Frosinone south of Rome.

Bannon had said he would bring in teachers and raise money for the academy, which had been dubbed a "gladiator school" for the alt-right.

But local residents objected and ultimately the Culture Ministry, under the leadership of the center-left politician Dario Franceschini, sought to revoke the lease, alleging a host of irregularities that the institute denied and that lower courts rejected.

The Council of State, however, found that the institute had misrepresented its legal status and experience in the field of promoting cultural heritage when it originally bid for the concession, fudging requirements of the terms of the Culture Ministry's tender.

In its 40-page ruling, the tribunal said the institute had "obtained an economic advantage [winning the concession of a culturally relevant asset via a process of selection] on the basis of declarations made at the time of the bid that were subsequently shown to be not true." 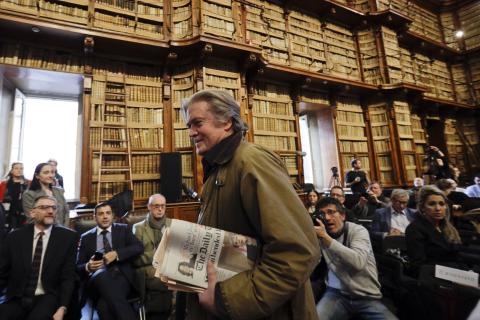 In this Thursday, March 21, 2019 file photo former White House strategist Steve Bannon arrives to deliver his speech on the occasion of a meeting at Rome's Angelica Library. Italy’s top administrative court, the Council of State, has ruled Monday March 15, 2021, against a conservative think tank affiliated with former White House adviser Steve Bannon over its use of the Certosa di Trisulti monastery, located in the province of Frosinone south of Rome, to train future populist leaders. (AP File/Gregorio Borgia)

It determined that the Culture Ministry was right to revoke the lease given the monastery is a part of Italy's cultural heritage, and that doing so was in the "public interest" given the institute "never showed it truly possessed all the requirements" to maintain the monastery.

The center-left leader of the Lazio region, Nicola Zingaretti, hailed the decision.

"Steve Bannon and the sovereigntists must leave the Trisulti," Zingaretti said on Facebook, vowing to work with the Culture Ministry to "return this marvelous place to the people."

The local Catholic bishop also praised the decision, saying the Council of State had done the right thing by returning the monastery "to the people of God and to the entire community."

In a statement reported by the Avvenire newspaper of the Italian bishops conference, Bishop Lorenzo Loppa said the diocese would now work with the community to find a new life for this "monastic jewel," suggesting it could be used as the headquarters of a foundation.

Bannon said March 16 the court decision was a politically motivated "joke" that was befitting of a developing country. He labeled the Italian government "corrupt, incompetent and broke" and unable to care for the monastery, which he vowed to fight to keep.

"We refuse to be stopped by the corrupt bureaucracy that infests Italian government and hurts the Italian people," Bannon said in a statement, adding that the tribunal decision "brings further shame on Italy's already-stained judiciary in eyes of the whole world."

It is unclear, however, what further legal recourse he has.

Benjamin Harnwell, founder and president of the institute, had previously argued the institute was being targeted because of its affiliation with Bannon and its support for Italy's right-wing leader Matteo Salvini and his "heroic blockade of the illegal migration into Italy."

Dignitatis Humanae, which says its goal is to defend the Judeo-Christian foundations of Western civilization, had counted on the high-profile support of conservative American Cardinal Raymond Burke, who was named honorary president of the institute in February 2019. But Burke resigned in June of that year, saying in a statement he was stepping down because the institute had "become more identified with the political program of Mr. Bannon."

It's the latest setback for Bannon's efforts to rally the European right-wing, after his earlier efforts to court the likes of Salvini and France's Marine Le Pen ended with the Europeans largely brushing Bannon off.

Ex-President Donald Trump pardoned Bannon, his former chief strategist, in his final hours in office after Bannon was indicted on charges he allegedly defrauded thousands of donors who believed their money would help build a wall along the U.S.-Mexico border. Prosecutors in New York say the money instead went to pay a campaign official's salary and personal expenses.