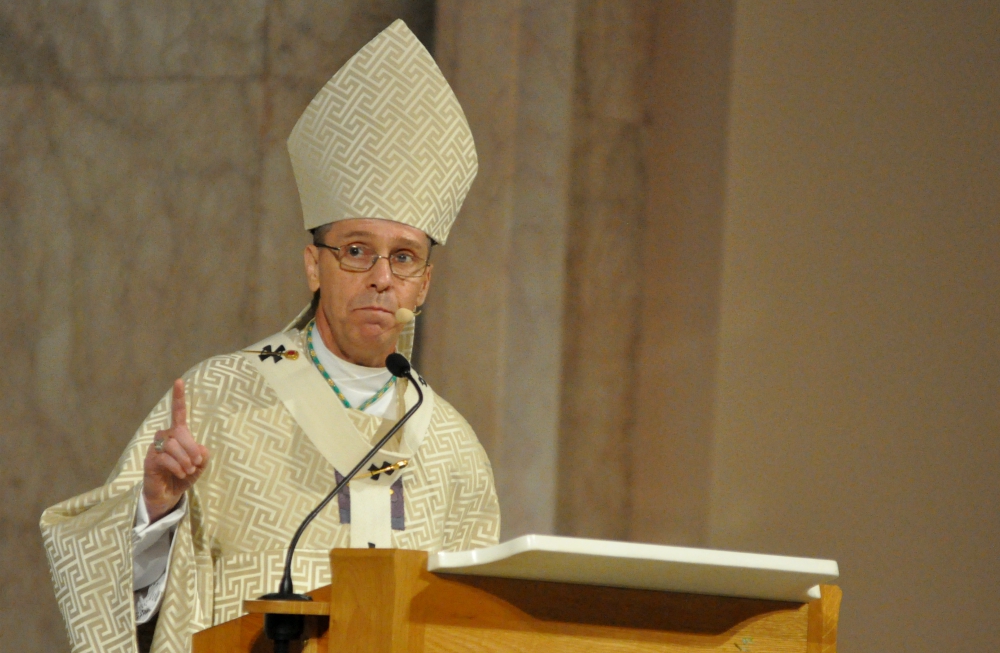 Archbishop Charles Thompson delivers a homily at Sts. Peter and Paul Cathedral in Indianapolis last year. Thompson is among a group of clergy who planned to accompany an immigrant mother to her supervision check-in with Immigration and Customs Enforcement April 24. (CNS/The Criterion/Sean Gallagher)

CHAPEL HILL, NORTH CAROLINA — The North Elliott Road church campus, shared by the Presbyterian Church of Reconciliation and the Chapel Hill Mennonite Fellowship, is offering sanctuary to a mother of four who fears she will be killed if sent back to her native Honduras, The Herald-Sun reported April 17.

Rosa del Carmen Ortez-Cruz fled Honduras in 2002, when she was 19, after her domestic partner repeatedly stabbed her. She has lived in Greensboro, North Carolina, for 11 years and three of her children are U.S. citizens. U.S. immigration courts recognized her life was in danger in Honduras, but denied her request to stay in the country.

The church converted an office into a bedroom and a closet into a shower so Ortez-Cruz can have a place to stay while being shielded from deportation. Immigration officials do not typically conduct enforcement in "sensitive" locations such as churches and schools.

ST. MARYS, GEORGIA — As seven peace activists remain in jail after their April 5 arrest for breaking into the Kings Bay Nuclear Submarine Base in St. Marys, their support team is trying to amplify their message by distributing suggestions for ways to support the group and oppose the Trident nuclear weapons system.

The list of suggestions, sent out in an April 21 email, included:

Liz McAlister, Jesuit Fr. Stephen Kelly, Martha Hennessy, Clare Grady, Patrick O'Neill, Mark Colville and Carmen Trotta entered the base April 4, the 50th anniversary of Martin Luther King's assassination, with hammers and baby bottles of their own blood in an attempt to "beat swords into plowshares" and call attention to the threat of nuclear weapons and the environmental damage caused by their production.

INDIANAPOLIS — Indianapolis Archbishop Charles Thompson is among a group of clergy, many brought together by the Faith in Indiana network, who planned to accompany an immigrant mother to her supervision check-in with Immigration and Customs Enforcement April 24.

The woman, Erika Fierro, came to the U.S. age the age of 5 and has lived in Indianapolis for more than two decades, according to an April 23 press release from Faith in Indiana. Her two children are U.S. citizens and her husband is in immigration detention after being arrested while on his way to work. Fierro was arrested at the same time but was released with a tracking bracelet on her ankle.

The clergy members plan to ask Ricardo Wong, field office director of the Department of Homeland Security, to grant Fierro a credible-fear interview because she fears gang violence in Mexico, where some of her family members have been kidnapped or killed. The clergy members hope this will allow her to stay in the United States and remain united with her children.