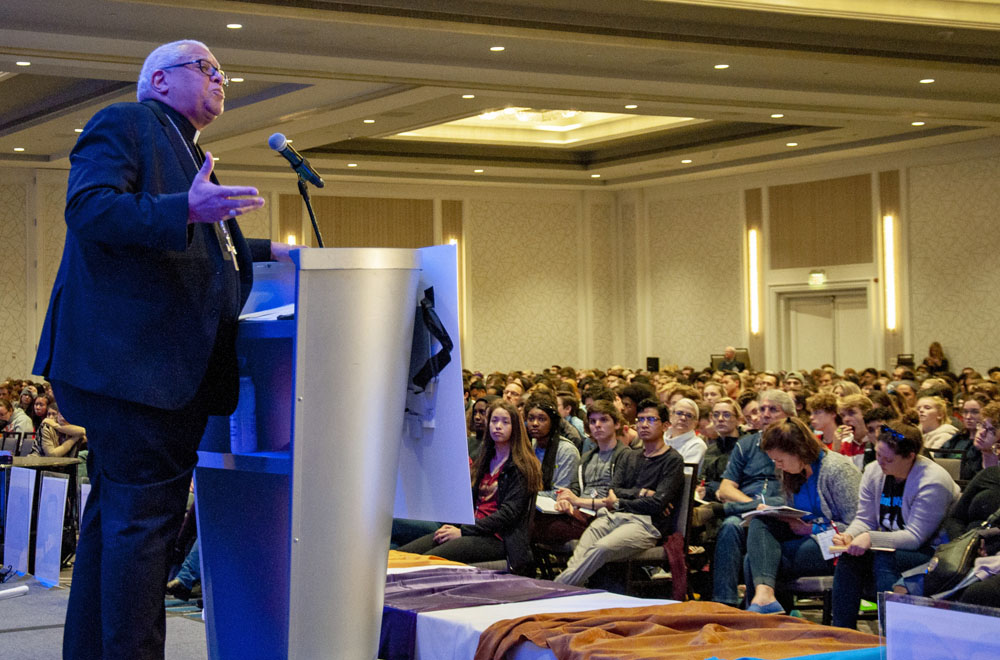 WASHINGTON — Over 1,500 representatives of Jesuit and other Catholic high schools, universities and parishes met with legislators and their staff on Capitol Hill Nov. 5 to engage in advocacy related to immigration and criminal justice.

The Ignatian Solidarity Network said in a press release Oct. 31 that the day of advocacy is estimated to be the "largest Catholic advocacy day of the year." It comes at the end of the Ignatian Family Teach-In for Justice, a conference and Catholic social justice gathering held Nov. 3-4 in Crystal City, Virginia, that brought together around 2,000 mostly young people affiliated with Jesuit and other Catholic organizations.

Presenters at the teach-in included Bishop George Murry of Youngstown, Ohio, former chair of the Ad Hoc Committee Against Racism for the U.S. bishops' conference; Nichole Flores, a theologian from the University of Virginia; The Peace Poets; Joanna Williams, director of education and advocacy at the Kino Border Initiative; and Jesuit Fr. James Martin, editor at large at America Magazine.

This year's theme was "Discipleship at the Crossroads: The Courage to Journey Together as an Intersectional Community."

LONDON — Three Catholic Workers and 10 members of Christian Climate Action were part of a crowd of over 1,000 people that joined the "Extinction Rebellion" outside the Westminster Parliament in London to declare a nonviolent rebellion and call for action on climate issues.

About 15 protesters, including Christian Climate Action member Nick Cooper, were arrested when they blocked a road for several hours after a rally in the middle of Parliament Square.

According to an Oct. 31 article in The Guardian, the protest came a day after scientists warned that humans had wiped out 60 percent of mammals, birds, fish and reptiles since 1970 and the same month that the U.N. said humans only have 12 years to prevent climate catastrophe.

The newly formed Extinction Rebellion group planned the event as the kickoff for a campaign of mass civil disobedience in November which will include blocking several London bridges, and will culminate with a sit-in in Parliament Square Nov. 17.

SILVERDALE, WASH. — At least one member of the Los Angeles Catholic Worker was involved with organizing a Cancer Patients Vigil Nov. 2-4 at Naval Base Kitsap-Bangor in Silverdale, Washington.

The Catholic Worker, Karan Founds-Benton, requested messages from cancer patients, friends, families and health workers who were not able to attend in person, including messages memorializing those who had died of cancer.

"The theme [of the vigil] is the legacy of cancer we leave to future generations because of our attachment to the nuclear industry," Founds-Benton wrote.

She added that organizers hoped to express "concern for the rising rates of cancer and a belief that cancer is not just an unfortunate random disease that one day, with enough money, will disappear. Rather it is something we perpetuate through our practices here and now, disregarding our planet, our health care system and future generations."

WASHINGTON — Faith leaders around the country organized to encourage Latinos to vote ahead of the Nov. 6 midterm elections.

According to an Oct. 30 press release from Faith in Action, a national faith-based community organizing network formerly known as PICO, speakers including Nanci Palacios from Faith in Florida, Providence Sr. Tracey Horan with Faith in Indiana and Richard Morales, LA RED Policy and Program Director, had participated in a media call that day to share their work with Latino voter engagement.

Palacios discussed efforts to target phone banks to Latino voters, while leaders with Faith in Florida are educating voters about an amendment which can restore voting rights and ensuring that Spanish-language voter materials are available. Organize New Mexico and Faith in Texas have hosted candidate forums for those running for sheriff and district attorney — races that will most affect issues of immigration and border enforcement.