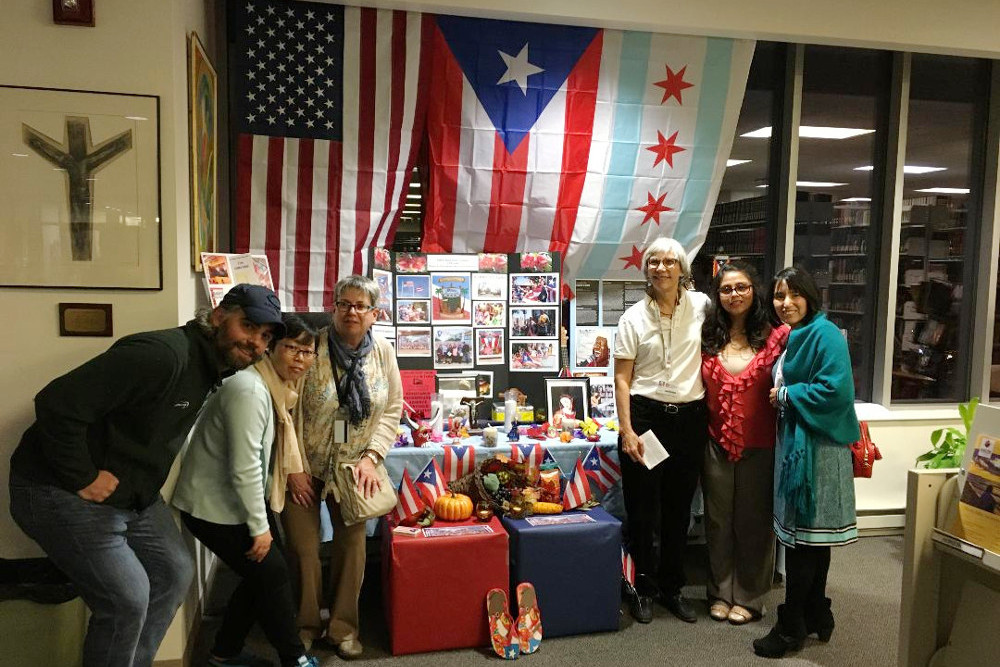 Students stand next to an ofrenda they created for the Day of the Dead representing a local neighborhood for a pastoral ministry class at the Catholic Theological Union in Chicago. The ofrendas will be on display from Oct. 24 to at least Nov. 2. (Photo by Claretian Fr. Eddie DeLeon)

CHICAGO — Students at the Catholic Theological Union in Chicago are celebrating the Day of the Dead Nov. 2 by creating altars that represent local pastoral realities in various Chicago neighborhoods.

The altars, also known as ofrendas, were inspired by those traditionally displayed to honor deceased loved ones in Mexican and Latin American countries on the day the Catholic Church celebrates as All Souls' Day. For the pastoral ministry class, taught by Claretian Fr. Eddie DeLeon, students based their ofrendas on field research conducted in local neighborhoods, which included visiting murals and interviewing residents.

According to one of the students in the class, Fr. Eugene Koprowski, the four neighborhoods visited included "Pilsen, a largely Mexican-American neighborhood; Humbolt Park, a predominately Puerto Rican neighborhood; Bronzeville, a historically black neighborhood; and Chinatown, where immigrant Chinese Catholics and descendants of Italian immigrants worship together."

"The idea was that for effective ministry one needs to be on the streets meeting the people, hearing their concerns, and seeing how they express themselves — not stuck in a rectory, just guessing," Koprowski wrote in an email to NCR. In his research in Pilsen, he heard stories of recent arrivals from Mexico as well as older generations, and saw "images of immigrants as Christ-like figures, baptized in the Rio Grande, so to speak, and going through a passion-like event through the barbed wire to get to a new life in America."

The ofrendas were set up in the Catholic Theological Union lobby, library and student common area Oct. 24 and will remain through at least Nov. 2.

The plan includes more active outreach to the homeless from healthcare workers, improving due process protections, setting consistent standards of care for shelters, proper storage of seized personal property and guidelines for accommodating people with disabilities.

The lawsuit, filed in January on behalf of seven encampment residents and the Orange County Catholic Worker, sought to prevent the camp from being cleared and to end anti-camping ordinances that effectively criminalized homelessness. U.S. District Judge David Carter helped oversee a series of agreements that allowed the camp to be cleared while ensuring its former residents were housed.

Another case filed in February on behalf of the People's Homeless Task Force and seven disabled people living on the riverbed focused on services for adults with special needs.

WASHINGTON — Several Catholic groups spoke out in favor of those seeking refuge from violence and poverty as the U.S. sends troops to the border in response to a migrant caravan that is traveling toward the U.S. from Honduras.

A joint statement Oct. 29 by Austin Bishop Joe Vásquez, Chairman of the U.S. Conference of Catholic Bishops Committee on Migration; Sean Callahan, President and CEO of Catholic Relief Services; and Dominican Sr. Donna Markham, President and CEO of Catholic Charities USA; urged the government to abide by domestic and international laws protecting asylum seekers. They also called for the U.S. to invest in the addressing the root causes of migration.

The Franciscan Action Network also affirmed the right to seek asylum in an Oct. 24 statement.

"Those in the migrant caravan are not gang members or terrorists, in fact many have family members in the United States who are citizens. These people simply want to live with their families free of fear. According to international law, they have a right to seek asylum where they feel safe," the statement said.