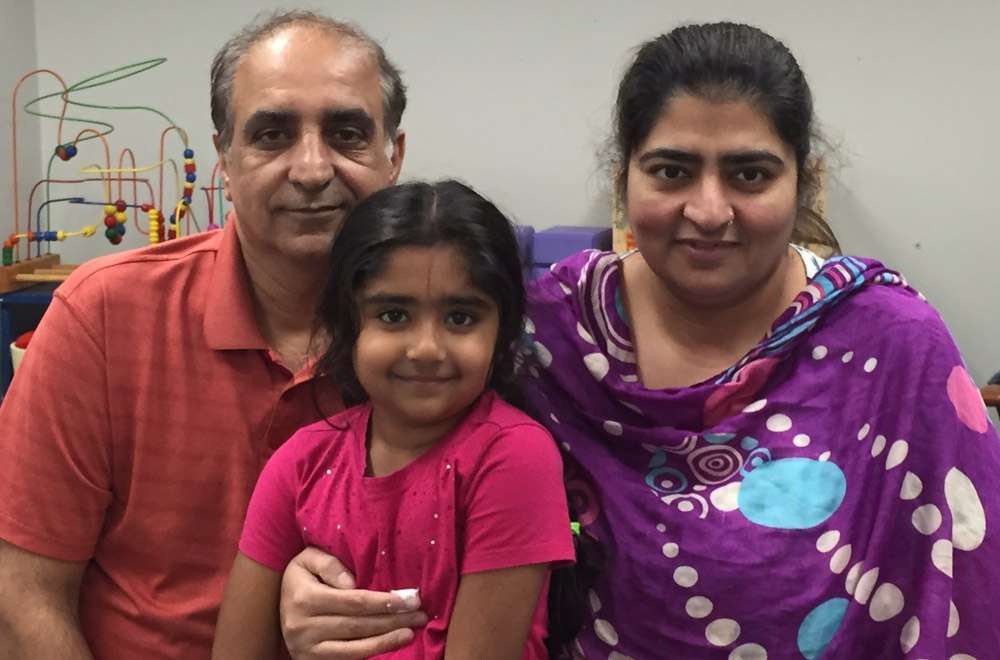 Malik Naveed bin Rehman, his wife Zahida Altaf and their 5-year-old daughter Roniya are pictured July 30 in the First Congregational Church of Old Lyme church nursery, which served as their living room while they lived in sanctuary for seven months. (Lina Tuck)

OLD LYME, CONNECTICUT — After spending seven months in sanctuary at the First Congregational Church of Old Lyme, a Pakistani family was able to return to their home and reopen their pizza shop.

According to a report from the Bristol Herald Courier, Malik Naveed bin Rehman and his wife Zahida Altaf had been living in the church with their 5-year-old U.S. citizen daughter Roniya to shield themselves from deportation since March 19 while they challenged a deportation order.

They left sanctuary Oct. 16 after Immigration and Customs Enforcement officials told them they are not opposing their stay request, which is still pending in a federal appeals court. According to an email from its Immigrant Assistance Committee, the church held a celebration for the couple Oct. 21 in honor of their release. Malik's ankle tracking bracelet was also removed Oct. 20 during an ICE check-in.

The couple had been living in the U.S. since 2000. They overstayed their visas and, when they attempted to extend them and apply for citizenship, were misled by an attorney who was later jailed for fraud.

The Guatemalan husband and father, who has been in the U.S. who nearly 20 years, came to the attention of immigration officials after an encounter with police in 2009 related to a child endangerment case which was later dropped. Perez's lawyer is asking the immigration appeals court to reopen his case.

BRUNSWICK, GEORGIA — In two separate court cases, activists are planning to use a religious freedom defense to justify actions that led to their arrest. Under Attorney General Jeff Sessions, the Justice Department has increasingly focused on protecting religious freedom.

Seven defendants known as the Kings Bay Plowshares group who entered the Kings Bay Naval Base in St. Marys, Georgia, during early April to protest nuclear weapons are arguing that under the Religious Freedom Restoration Act that their charges should be reduced or dismissed.

The act says that governments should use the least restrictive means possible to curtail the exercise of religious beliefs when they are in opposition to laws or government interests, and the Kings Bay Plowshares defendants plan to argue their beliefs compelled them to carry out their symbolic act. An evidentiary hearing is scheduled for Nov. 7.

Five of the defendants are out on bail and have been able to return home with ankle monitors and curfew restrictions, while two remain imprisoned in Brunswick, Georgia.

Scott Warren, a volunteer with No More Deaths who was arrested for harboring unauthorized immigrants in Arizona, has also attempted to use the Religious Freedom Restoration Act as a defense, arguing that his religious beliefs compel him to aid those in distress.

While a judge refused to dismiss the changes on religious freedom grounds in May, NPR reported that Warren will be allowed to try the defense again during his trial in November.

SANTA CLARA COUNTY, CALIFORNIA — Catholic Charities of Santa Clara County received a grant of $150,000 from Bank of America and United Way Bay Area to support its Santa Clara County house sharing program. The program seeks to ameliorate the area's affordable housing crisis by matching up unrelated people to share a space, such as a homeowner renting out an unused room or two people renting a house together.

The program prioritizes people with below-median incomes and aims to house more people by taking advantage of unused living space. It was launched in August and the new grant was announced Oct. 19.