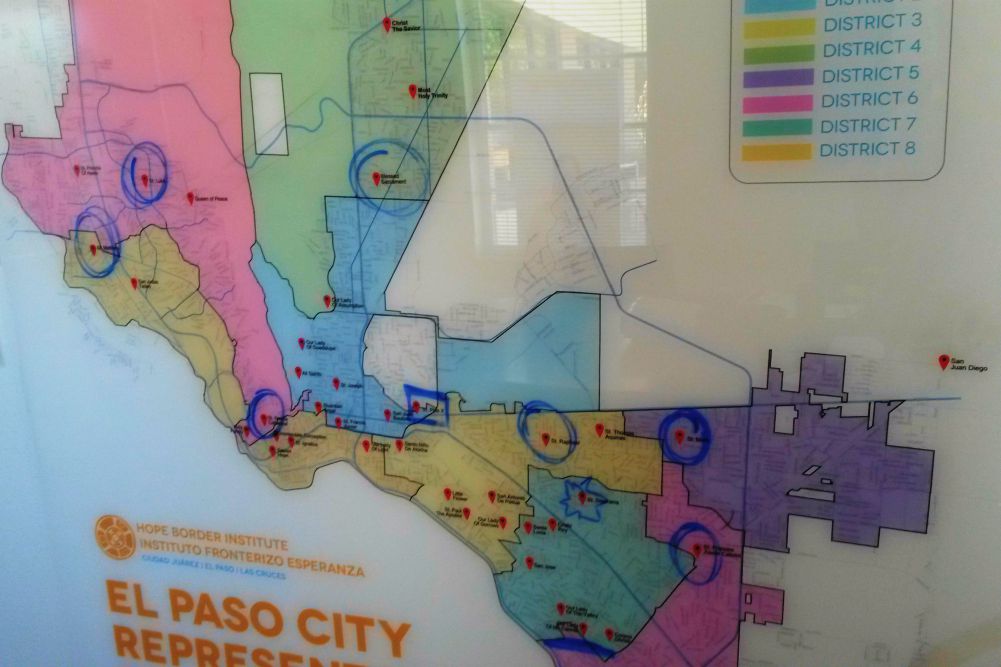 A map of El Paso in the office of the Hope Border Institute in El Paso, Texas, used to plan the #AquíEstamos civic engagement campaign, is pictured Sept. 18. (NCR/Maria Benevento)

According to KVIA, early voter turnout alone spiked by over 100,000 from the last midterm election, reaching over 139,000. The 262 percent increase was, by a wide margin, the largest increase in any of Texas' most populous counties, and the turnout was the second largest in El Paso history, exceeded only by the November 8, 2016, election. KVIA also noted that the growth was fueled largely by young voters and women.

This trend was reflected in the #AquíEstamos voter engagement campaign led by the Hope Border Institute, said Diego Adame, a community organizer for the institute who was very involved in the campaign. Mariza Mendoza, the youngest member of the #AquíEstamos group at St. Mark Catholic Church on the east side of El Paso collected the highest number of voting pledges.

Overall, the St. Mark group collected 1,026 voting pledges, while the St. Luke Catholic Church group from the West side of town collected the second most — over 600.

Adame attributed the increased voter turnout to interest in local issues, including immigration, and enthusiasm for Beto O'Rourke, the Senate candidate who lost to Ted Cruz this Nov. 6 but did unusually well for a Democrat in a statewide Texas race. O'Rourke is a native of El Paso, a heavily Latino and Democrat city.

The AquíEstamos campaign will continue to encourage civic engagement by helping people organize themselves around issues that are important to them and educating them on human rights and Catholic Social Teaching, Adame said.

ANN ARBOR, MICH. — Quakers in Ann Arbor, Michigan, are offering sanctuary to a man who says he will die if deported because the dialysis treatments he needs to survive are unreliable and expensive in his native Guinea, Michigan radio reported Nov. 4.

Mohamed Soumah, who lived in the U.S. for 15 years, overstayed his visa and was ordered deported in 2011. Officials allowed him to remain free while they arranged for a travel document from Guinea, but labeled him a "fugitive alien" when he failed to report for deportation this October due to hospitalization. He accepted sanctuary from Ann Arbor Friends Meeting House.

Soumah has polycystic kidney disease and requires dialysis three times a week. Dialysis services in Guinea are unreliable, difficult to access and have to be paid for out of pocket; Soumah's mother died after a botched dialysis treatment in his home country. MLive reported Nov. 9 that the Ann Arbor City Council voted unanimously to pass a resolution asking Immigration and Customs Enforcement to offer Soumah a stay of deportation because of the risk to his life if forced to return home.

Information about how Soumah will receive his dialysis treatments hasn't been made public, for his protection, but ICE has a policy of not typically conducting enforcement actions at "sensitive locations" such as churches and medical facilities.

In other sanctuary news, the New Haven Register reported Nov. 5 that Pakistani natives Malik Naveed bin Rehman and his wife Zahida Altaf were able to return home to New Britain, Connecticut, after being in sanctuary for seven months at a Congregational church. Immigration officials told them they wouldn't be deported while their asylum appeal was in progress, but they are now unable to make a living.

After leaving sanctuary last week the family returned to find that their business, the Pizza Corner, had been vandalized and robbed overnight and that the man who had been managing the restaurant in their absence had left it in debt. They are unable to operate the business because it is still licensed to the interim manager through Feb. 2019.

UNITED STATES — A group of over 200 ethicists, theologians and others who teach Christian ethics issued a statement Oct. 31 in response to recent acts of violence and hatred.

Titled "Hospitality and Solidarity, Not Hostility and Hate: Statement of Christian Ethicists Without Borders on Anti-Semitism, Racism, & Xenophobia," the statement is hosted on the Daily Theology blog and was drafted by MT Davila, Anna Floerke Scheid, Grace Kao, Tobias Winright and Christine McCarthy.

It follows a similar statement from over a year ago that came in response to violence in Charlottesville, Virginia, Aug. 11-12, 2017, during a rally of hundreds of white supremacists, and repeats and renews that statement's pledge to commit to "the ongoing work of building bridges and restoring wholeness where racist, anti-Semitic, and xenophobic ideologies have brought brokenness and pain."

The most recent statement comes in response to the sending of pipe bombs to prominent Democrats, the killing of two African-Americans in Jeffersontown, Kentucky, and the shooting deaths of 11 Jewish people at the Tree of Life Synagogue in Pittsburgh. It cites hospitality, human dignity, honestly and humility as values that are currently in need of special emphasis.