WASHINGTON — On the same day that six activists will be arraigned in Superior Court in Washington for a Jan. 11 sit-in at the office of Rep. Steny Hoyer (D-Maryland) in protest of U.S. involvement with Saudi Arabia, activists also planned an action on the White House lawn the afternoon of March 19. 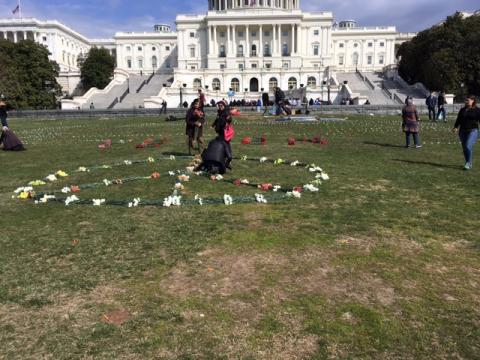 A peace sign made of flowers is pictured after a demonstration on the White House lawn March 19 to protest U.S. support of Saudi Arabia's war on Yemen. 5,000 flowers were placed on the lawn to represent Yemeni children who had been killed or injured. (Paki Weiland)

According to an email from Janice Sevre-Duszynska, an event participant and one of those arrested Jan. 11, participants will lay 5,000 flowers on the White House lawn in memory of Yemeni children killed or injured as a result of U.S.-supported Saudi war on Yemen.

The event, hosted by grassroots Muslim group MPower Change, is in support of a bipartisan resolution Sens. Bernie Sanders (I-Vermont), Mike Lee (R-Utah), and Chris Murphy (D-Connecticut) introduced which invokes the War Powers Act to stop U.S. participation in the war without Congressional authorization. A vote on the resolution was expected March 20.

A protest of President Donald Trump's March 20 meeting with Saudi Crown Prince Mohammed bin Salman, is also planned for that morning. The protest, hosted by CODEPINK: Women for Peace, will take place in front of the White House. Activists planned to call for a halt to weapons sales to Saudi Arabia and other cooperation in the war on Yemen.

LANSDOWNE, Virginia — Prison Fellowship, the largest Christian nonprofit serving prisoners, ex-prisoners and their families in the United States, organized a bipartisan Congressional panel on barriers that formerly incarcerated people face when they leave prison, according to a March 13 press release.

WASHINGTON — On the same day that students across the nation, including at many Catholic schools, walked out for 17 minutes to honor Parkland shooting victims and protest gun violence, students at St. Anthony Catholic School in Washington, D.C., held a stations of the cross to mourn victims and pray for an end to gun violence.

According to a report from The 74, an education news site, third to eighth grade students participated in the event, which began with a procession of 17 candles and the reading of the 17 Parkland victims' names. During the immediately following Stations of the Cross, students read short reflections that tied each station to gun violence.

At the fourth station, Jesus meets his mother, students prayed for parents who have lost children to violence while at the seventh station, Jesus falls for the second time, students reflected on the number of times the nation has tried and failed to make changes in the wake of gun violence.

LOUISVILLE — Unknown individuals hung 17 crosses, each with the name and age of a Parkland shooting victim, from a billboard in Louisville, Kentucky, that was advertising a gun show, the Louisville Courier Journal reported March 11.

The crosses appeared the morning of March 11 below a billboard that read "National Gun Day Gun Show" and featured a photograph of a man holding two guns. Both the crosses and the billboard text were scheduled to be removed the same afternoon.