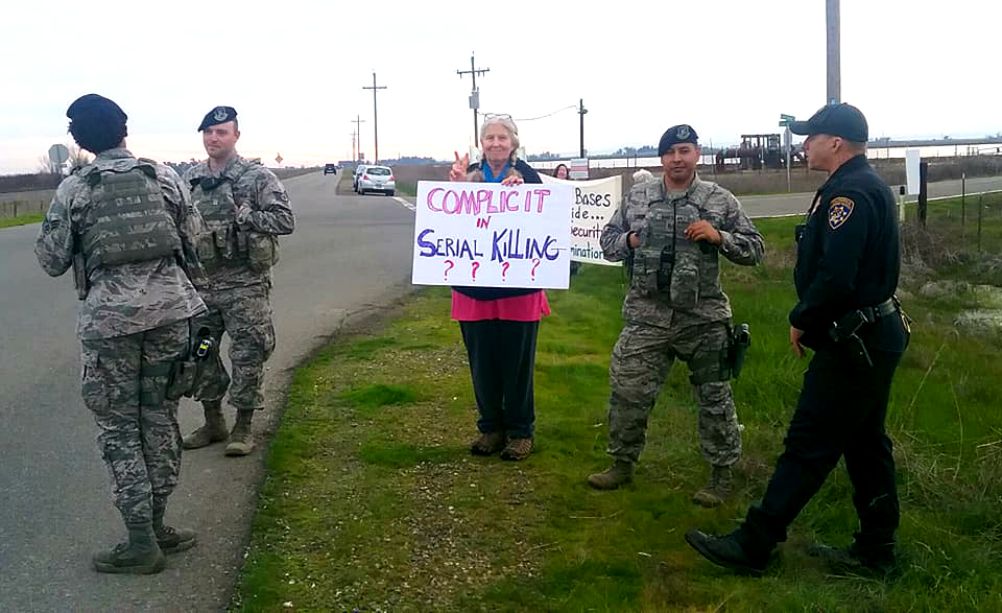 Activist Chris Nelson holds a sign near Beale Air Force Base during a Jan. 29-30 vigil in protest of drones. (Courtesy of Toby Blomé)

WASHINGTON — Parishes, dioceses, and other faith-based groups will have the opportunity to gain advice on how they might launch or strengthen anti-trafficking ministries during a webinar sponsored by U.S. Conference of Catholic Bishops/Migration and Refugee Services Feb. 8.

Lisa Lundgren, the event moderator, told NCR in an email that the webinar will focus on "practical tips and guidance" from four parishes or dioceses who will share "the steps they took to move from awareness of trafficking to concrete action."

Presenters will discuss specific activities that had an impact on the four P's of anti-trafficking work — "prevention, protection, prosecution and partnerships" — and the moderators will provide resources to attendees, Lundgren said.

The lawsuit alleges that local governments forced people into the area of the encampment, a bike trail along the Santa Ana River, and are now trying to force them out with no alternative housing plan. It seeks to prevent officials from closing the trail, issuing citations for trespassing, and enforcing municipal camping and loitering ordinances.

WAUKEGAN, Ill. — Fr. Gary Graf, pastor of Holy Family parish in Waukegan, Illinois, near Chicago, is fasting from solid foods until lawmakers replace the Deferred Action for Childhood Arrivals (DACA) program, which protects undocumented immigrants who were brought to the U.S. as children.

According to a Jan. 26 press release from the Association of U.S. Catholic Priests, Graf will live on water and protein powder until at least March 5, the date when the program is set to end if Congress does not act. Leadership team members of the priests' association announced support for Graf and for immigrants threatened by the loss of DACA.

In a Feb. 2 email, Fr. Bob Bonnot, chair of the association's leadership team, told NCR that the leadership team was committed to joining Graf's fast one day each week.

YUBA COUNTY, Calif. — A group of activists from Northern California, several of them motivated by faith, held an anti-drone vigil at Beale Air Force Base in Yuba County, California, Jan. 29-30.

According to event organizer Toby Blomé, the group was a "strong presence" at the base's three main gates, holding signs and large banners with messages of peace. One activist also passed out fliers to people leaving the base through one of the gates.

Blomé said the reaction to the protest was especially positive, with 40 fliers accepted compared to an average of 12-15 for similar events, and more people expressing support through comments, waves and peace signs. A military police officer who had spoken with the group in the past also shared that he and his wife had decided not to renew their contracts at the base.