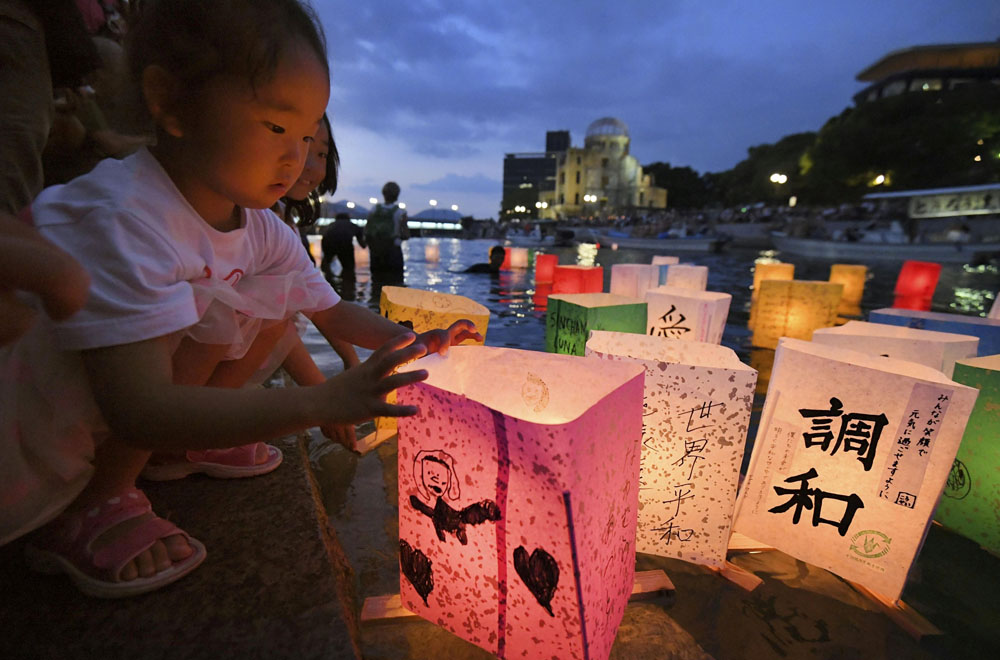 A girl releases paper lanterns on the Motoyasu River facing the gutted Atomic Bomb Dome in Hiroshima, Japan, Aug. 6 to commemorate the 73rd anniversary of the world's first use of an atomic bomb in war. More than 75,000 people were killed in Hiroshima when the United States dropped the bomb near the end of World War II. (CNS/Francis Mascarenhas, Reuters)

BALTIMORE — With the passage of Council Resolution Request for Federal Action – Move Back From the Brink and Toward Nuclear Disarmament, Baltimore, Maryland, is the first major city in the United States to sign on to a campaign to call for the prevention of nuclear war.

Baltimore joins 11 small cities and towns in Massachusetts and Ojai, California, in joining a grassroots "Call to Prevent Nuclear War" campaign, Back from the Brink. The five-part call asks the U.S. to:

The city council resolution also notes the cost to taxpayers in Baltimore caused by nuclear weapons.

Advocates from Baltimore with Chesapeake Physicians for Social Responsibility and the Jonah House were involved in securing the U.N. Treaty on the Prohibition of Nuclear Weapons, adopted July 2017 by 122 countries. Prevent Nuclear War Maryland is working to urge the U.S. government to embrace the treaty.

NEW YORK — The Buddhist Council of New York, the Interfaith Center of New York and Pax Christi Metro New York co-sponsored the 25th annual Interfaith Peace Ceremony Aug. 5 to commemorate the Aug. 6 and Aug. 9 anniversaries of the bombings of Hiroshima and Nagasaki. 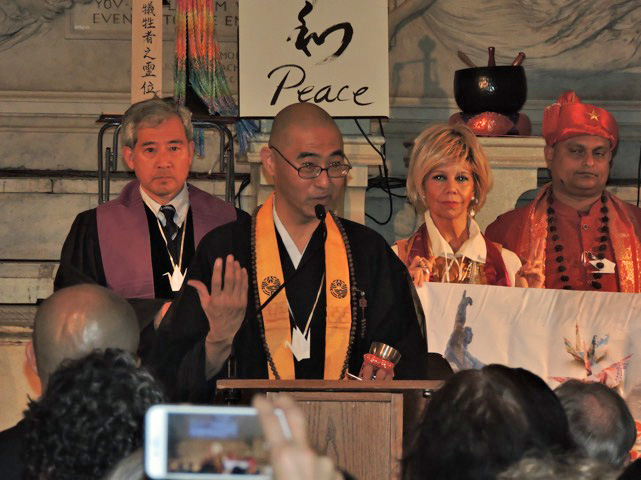 Rev. T. Kenjitsu Nakagaki, a Japanese Buddhist priest and the President and Founder of Heiwa Peace and Reconciliation Foundation of New York, welcomes participants to the 25th annual Interfaith Peace Gathering in New York Aug. 5. Nakagaki has organized the gathering since 1994. (Rosemarie Pace)

The event, organized by the Heiwa Peace and Reconciliation Foundation of New York, was also supported by the Origami Therapy Association and was held at Judson Memorial Church. It featured a keynote address by Maryknoll Sr. Jean Fallon, who emphasized shared responsibility for committing to nonviolence, and messages from the mayors of Hiroshima and Nagasaki, who expressed their solidarity.

Hiroshima survivor Tomiko Morimoto West also shared her story and talked about the importance of family; she never saw her mother again after leaving for school on the day of the bombing. 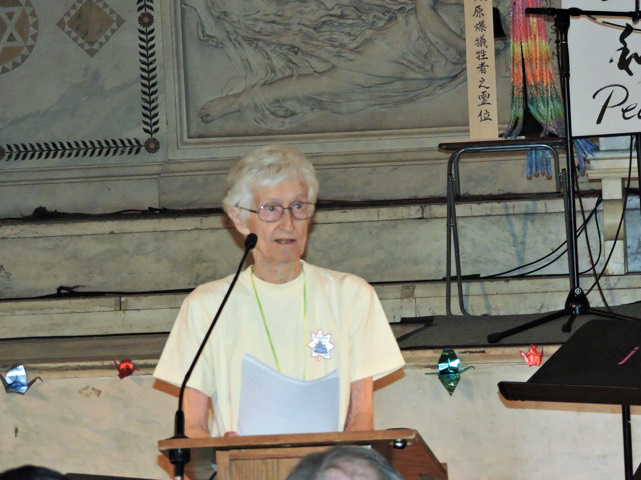 Hundreds of people, including local Buddhist, Shinto, Christian, Jewish, Hindu, Muslim and Native American religious leaders, attended the event. Faith leaders and representatives of the co-sponsoring organizations rang a bell for peace at 8:15 a.m. Hiroshima time (7:15 p.m. in New York), the exact time of the city's bombing 73 years ago. The ceremony was followed by a peace walk around Washington Square Park.

"We can only hope and pray that the strong feeling of community that penetrated the afternoon and evening among a few hundred people will grow and grow until the nuclear weapons states can no longer ignore us and we will all be able to celebrate the end to the threat of nuclear annihilation," Rosemarie Pace, Pax Christi Metro New York director, said in an Aug. 6 email to NCR.

Prior to the ceremony, a group of about 25 people also met for a Hiroshima Nagasaki Memorial Vigil in Washington Square Park. Participants rang a gong 73 times for the years since the bombings, recited the interfaith "Nuclear Prayer" and distributed information to passerby. 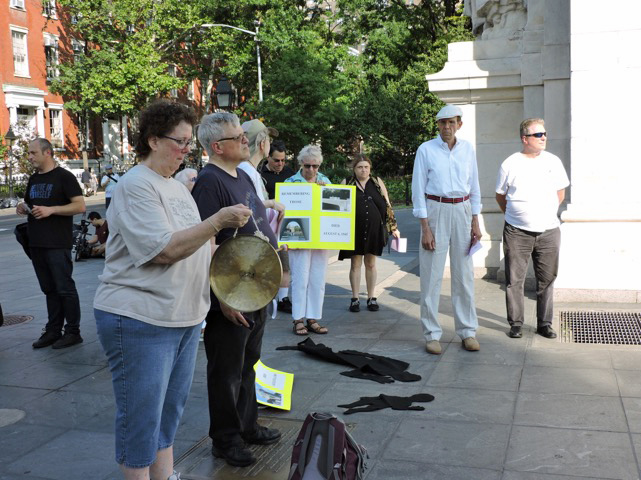 Participants in a Hiroshima Nagasaki Memorial Vigil in New York's Washington Square Park Aug. 5 ring a gong once for each year that has passed since the U.S. dropped atomic bombs on two Japanese cities. (Rosemarie Pace)

BRUNSWICK, Georgia — The seven activists known as the Kings Bay Plowshares group are taking an unusual path in their defense in their court case for entering the Kings Bay Nuclear Submarine Base earlier this year, using a religious freedom defense to argue that the government shouldn't prosecute them to the maximum extent of the law.

Attorney Bill Quigley, a law professor at Loyola University New Orleans and one of the attorneys defending the group, wrote in a report on the group's Aug. 2 hearing, published in the Nuclear Resister Aug. 5, that under the Religious Freedom Restoration Act, the government must only interfere with religious faith and practice when it has a compelling interest to do so and in the least restrictive way possible.

Quigley wrote that the group is also arguing that the weapons stored at the base and any property used to protect them are illegal under domestic and international law, that prosecution of the activists is "selective and vindictive," and that some of the charges criminalize the same conduct in several ways.

The protesters linked arms using braces and blocked elevators to Louisville Immigration Court during the morning of July 26, the deadline for the Trump administration to reunite families separated at the border. They chanted slogans such as "Abolish ICE" and "No justice, no peace."

The protesters were charged with second-degree criminal trespass and are also expected to face federal charges. Their protest delayed the start of immigration court that morning. Meanwhile, other protesters with Occupy ICE Louisville were forced to remove an encampment at a local park, where they had moved after being told they couldn't camp outside the Immigration and Customs Enforcement office.