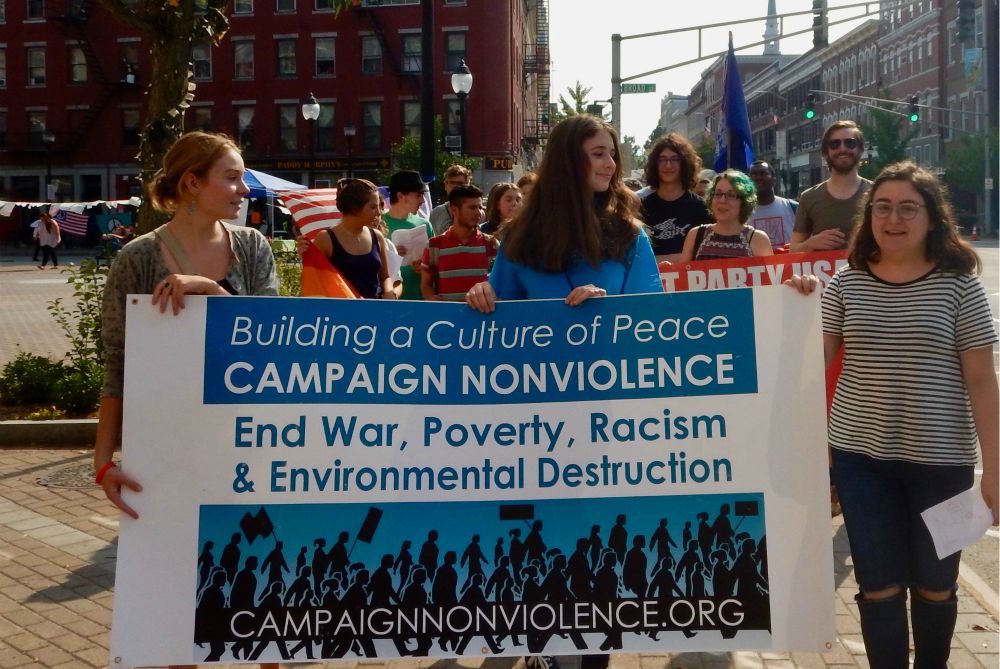 People marched for Campaign Nonviolence in 2017 in Bangor, Maine. More than 2,600 marches, rallies and other actions and events in opposition to racism, war, poverty and environmental destruction are planned for the week in all 50 states this year. (Pace e Bene)

SAN JOSE, Calif. — Casa de Clara, a Catholic Worker house in San Jose, California, is negotiating with law enforcement to find an alternative location for a homeless camp it organized Sept. 8. The camp, known as Hope Village, received a 72-hour-eviction notice from the highway patrol just two days after it was established in an empty parking lot on state property near the San Jose airport, NBC Bay Area reported Sept. 13.

While there are currently seven residents in the camp, it has space for about 25 tents and features a bathroom, solar power and a central gathering area. Tenants cannot have substance abuse problems, severe mental health issues or a history of violent behavior.

Law enforcement officers have agreed not to enforce the eviction notice after an outcry from advocates, politicians and the media. Camp organizers are working with the city, the country and the highway patrol to find another location for camp residents before they are forced to disperse.

WASHINGTON — Catholic Mobilizing Network, a national organization that works to oppose the death penalty and promote restorative justice announced Sept. 11 that it is launching a #HopeOverDeath Campaign in response to Pope Francis' revision of the catechism to say the death penalty is "inadmissible."

According to a Sept. 11 email from Catholic Mobilizing Network, the campaign is an effort to make sure Catholics understand that the church's official teaching now states "inadmissible because it is an attack on the inviolability and dignity of the person." It has relaunched the National Catholic Pledge to End the Death Penalty as well as other resources such as prayer cards, a video and a fact sheet about Catholic opposition to the death penalty.

WASHINGTON — Faith leaders from several Christian denominations, including the director of the Franciscan Action Network, joined outside the White House Sept. 12 to ask the president to admit at least 75,000 refugees for fiscal year 2019.

According to a Sept. 12 press release from the Franciscan Action Network, the group was responding to reports that President Donald Trump's administration, after setting the refugee cap at a record-low of 45,000 for fiscal year 2018 and then admitting less than half that number, was planning to reduce the cap even further to 25,000.

NEW ORLEANS — The Jesuit Social Research Institute and Loyola University New Orleans' student life and ministry departments are hosting a novena for migrant families from Sept. 11-19. According to a press release from Loyola, the novena's intention is "the safety and well-being of migrant families."

Event organizers described the novena as a response to the administration's harsh immigration policies, including family separation and the increased arrest of undocumented immigrants without criminal records living in the United States. The novena is being prayed in front of a Christmas crèche scene so participants will think of the Holy Family, which also was forced to flee to a foreign land.

CORVALLIS, Oregon — Campaign Nonviolence, a project sponsored by peace non-profit Pace e Bene, began its annual "Week of Actions" Sept. 15. According to a press release from the campaign, the week will culminate on Sept. 23, International Peace Day, and will include a march Sept. 22 from the statue of Martin Luther King, Jr. to the White House.

More than 2,600 marches, rallies and other actions and events in opposition to racism, war, poverty and environmental destruction are planned for the week in all 50 states, and more than 100,000 people are expected to participate. Last year the campaign organized over 1,600 events.