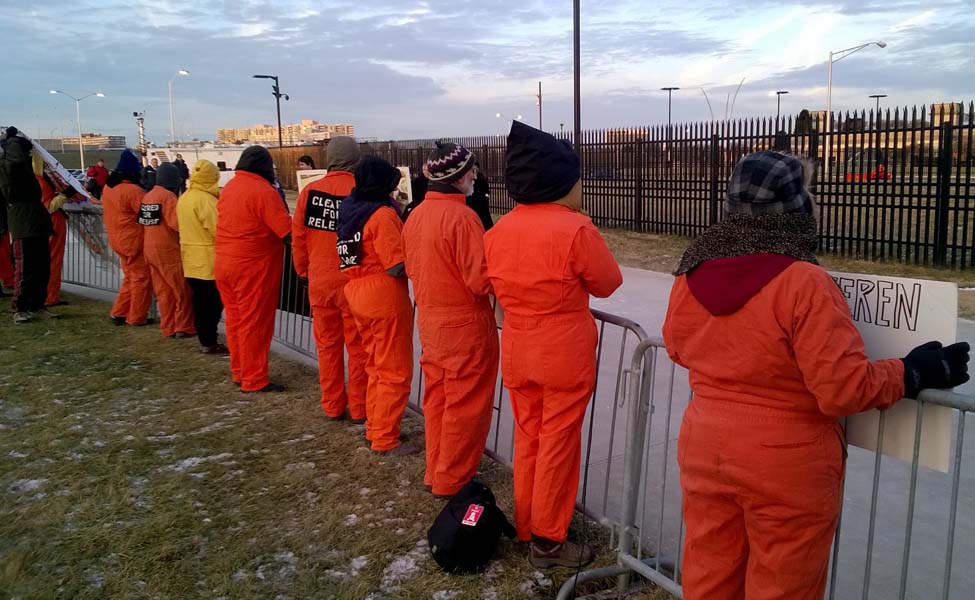 WASHINGTON — Witness Against Torture, a group that works to raise awareness about torture and indefinite detention at Guantanamo Bay and to combat Islamophobia in the U.S., partnered with the Dorothy Day Catholic Worker to begin a weeklong "Fast for Justice" Jan. 8.

At an opening vigil that took place at the Pentagon early in the morning on Jan. 8, Catholic Worker Art Laffin offered a litany stating the protesters' intent to "say yes to life, love and justice, and no to the death-dealing policies of a warmaking empire" and detailing the abuses at Guantanamo. The response to each portion of the litany was, "Torture is a Crime, Close Guantanamo Now!"

In an email to NCR, Laffin said approximately 20 people attended the vigil; most wore orange jump suits and black hoods, and held signs and banners opposing torture and calling for the closure of Guantanamo. Luke Nephew recited his poem "There is a Man Under That Hood" and other participants offered testimony.

According to a schedule on the organization's website, the group planned to share a meal the morning of Monday Jan. 8 before beginning a liquids-only fast that will last until 6 p.m. on Saturday Jan. 13. Other activities scheduled for the rest of the week include planning, preparing and carrying out more actions — such as a White House rally Jan. 11 — as well as a presentation by author Mark Fallon and a performance by Peace Poets.

The Witness Against Torture website says that 41 men remain imprisoned at the Guantanamo Bay detention center, even though five of them have been cleared for release.

WASHINGTON — Before the Department of Homeland Security announced its decision to rescind temporary protected status for nearly 200,000 Salvadorans Jan. 8, religious leaders spoke out to urge the administration to extend the designation for another 18 months.

On Jan. 4, a group of nearly 400 faith leaders and faith-based organizations released a letter asking DHS Secretary Kirstjen Nielsen to extend the status, highlighting the contributions of Salvadorans to the United States and the dangers they would face if forced to return to their home country.

A few weeks earlier, the chairman of the U.S. Catholic bishops' committee on migration and the leaders of four Catholic organizations — the Catholic Legal Immigration Network, Inc., Catholic Relief Services, Catholic Charities USA and the Scalabrini International Migration Network — had also urged the administration to extend the status in a Dec. 20 letter.

FT. MEYERS, FLA. — Judy Beaumont, a Plowshares activist who founded Good Shepherd Ministries and Church in the Park, died Jan. 1, 2018, according to an email from Janice Sevre-Duszynska.

Beaumont was a Benedictine sister for 34 years and later worked at My Sister's Place shelter in Connecticut. She served time in prison for her participation in the Trident Nein Plowshares, which took place on July 4, 1982, in Groton, Connecticut.

Beaumont began ministering to people experiencing poverty and homelessness in Ft. Meyers, Florida, in 2007, with her partner Judy Lee. She was ordained a Roman Catholic Woman Priest in 2012 and ministered at the Good Shepherd Inclusive Catholic Community with Lee.