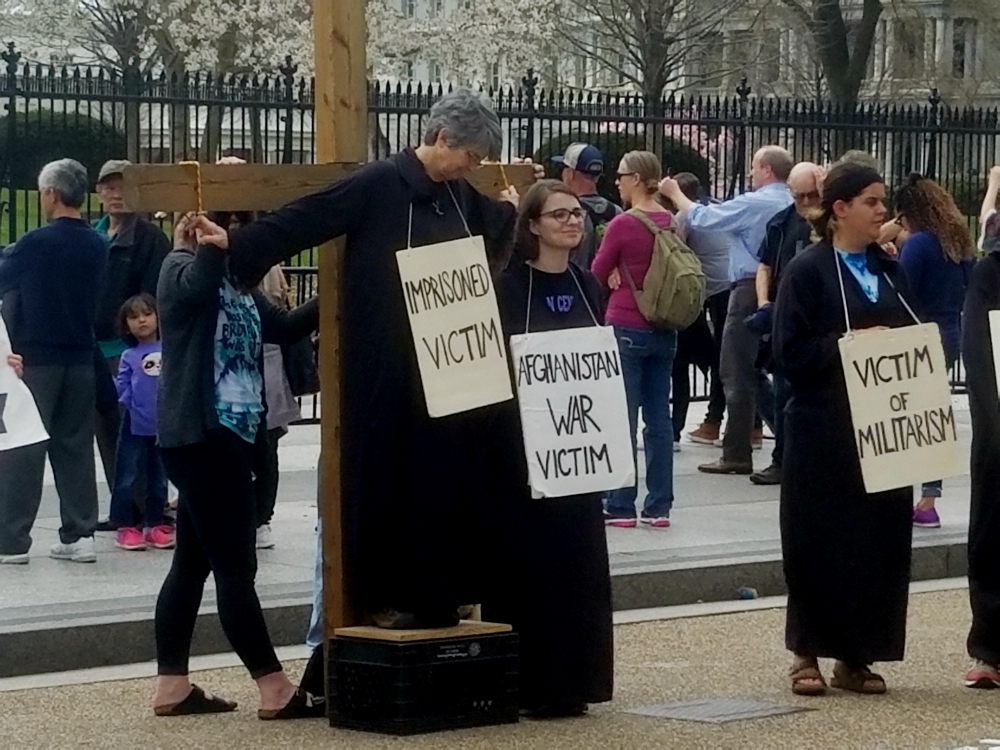 LAS VEGAS and INDIAN SPRINGS, NEVADA — At least 20 "peace walkers" were arrested during the 24th annual Sacred Peace Walk hosted by the Nevada Desert Experience, according to a report from The Nuclear Resister.

The 60-mile walk began March 24 in Las Vegas and ended March 30 at the Nevada National Security Site, formerly known as the Nevada Test Site, with the goal of drawing attention to the dangers of nuclear weapons, drones and nuclear waste. One stop on the walk was the Creech drone base in Indian Springs, where Darcy Ike and Robert Majors were arrested for blocking the road into the base.

Those who were arrested had crossed onto the site's property to represent the denial of Western Shoshone rights to gather medicinal plants even though U.S. occupation of the land is in violation of the 1863 Treaty of Ruby Valley.

SPRINGFIELD, MASS. — After a church in Springfield declared its intention to offer sanctuary to an immigrant mother in danger of deportation and to her two children, the city's mayor accused it of violating building and housing codes "and proper non-taxable use of their property," Western Massachusetts news site MassLive reported March 26.

Gisella Collazo is a Peruvian immigrant who entered the United States 17 years ago, married a U.S. citizen in 2005 and has U.S. citizen children aged 4 and 10. She received sanctuary with her children in South Congregational Church on March 26, a day before she was scheduled to depart.

Collazo has been attempting to regularize her legal status since 2006 but had received ineffective legal counsel in the past, the director of the sanctuary program said.

While Immigration and Customs Enforcement does not typically conduct enforcement actions in "sensitive" locations such as churches, Springfield Mayor Domenic Sarno opposes the church's efforts to offer sanctuary and has said city inspection teams will be notified about the improper use of the church building that will house the family.

WASHINGTON — A group of about 25, including students from Loras College in Iowa and members of Baltimore's Jonah House and the Atlantic Life Community, participated in a Faith and Resistance retreat and public witness in Washington, D.C., on Holy Thursday and Good Friday. The retreat was organized by the Dorothy Day Catholic Worker, according to an email from Dorothy Day Catholic Worker Art Laffin.

The theme of the retreat was "Standing With the Crucified Christ Today." After reflection, liturgy and planning March 29, the group conducted actions at both the Pentagon and the White House on Good Friday, March 30.

Seven people — Joe Byrne, Kathy Boylan, Anne-Marie Eslinger, Libby Johnson, Dominican Srs. Carol Gilbert and Ardeth Platte, and Sr. Megan Rice of the Society of the Holy Child Jesus — were arrested at the Pentagon on Friday morning when they did not return to the designated protest area after their request to speak to a Pentagon official about the need to ratify the U.N. Treaty on the Prohibition of Nuclear Weapons was denied.

At noon, the retreatants and over a dozen others gathered in front of the White House for a "contemporary crucifixion." Twelve people, each representing a particular persecuted group, such as immigrants, torture victims, or victims of specific wars, took turns standing on a crate with their arms outstretched on a cross. 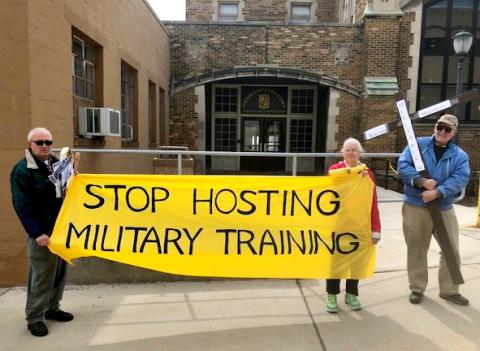 A Stations of the Cross on Marquette University's campus protests its ROTC program March 28. (Bob Graf)

MILWAUKEE — For the 50th year in a row, a group of protesters held a Stations of the Cross at Marquette University to oppose the hosting of ROTC programs on the Jesuit Catholic university's campus.

Event organizer Bob Graf said in an email that the evils of militarism, racism and materialism were listed on a cross, and the group stopped to display the cross and a banner in front of the Army ROTC building on campus during the March 28 event.

Graf said although numbers of protesters who attend the event have dwindled from the hundreds who participated in the tradition's early years, the message that Marquette should be faithful to the Gospel by refusing to host departments that "teach war, killing and violence" remains the same.