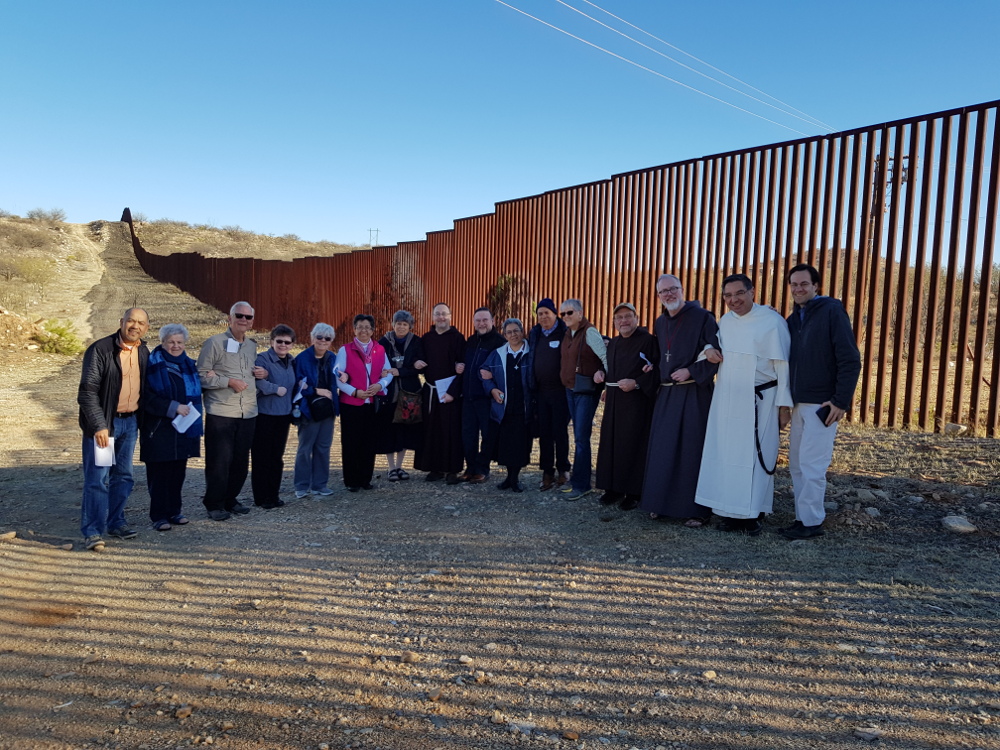 Leaders of the Catholic religious conferences of Mexico, the U.S., Canada and the Caribbean and Latin America gather at the border Feb. 23 to pray for Dreamers and other migrants. (Courtesy of Conference of Major Superiors of Men)

SANTA ANA, CALIFORNIA — On Feb. 20, a federal judge lifted a temporary ban on arrests of people staying in a homeless camp along the Santa Ana riverbed after local officials reached a settlement with a group which had sued them to prevent the destruction of the camp, Orange County's Voice of OC reported Feb. 21.

Attorneys for both parties agreed that the cities would provide food vouchers for the camp's residents and either find space for them in local homeless shelters or provide 30 days of motel vouchers while working to help them find more permanent housing. County social workers and public works officials have been helping residents find lodging and move, store or dispose of their belongings.

The Orange County Catholic Worker and seven people experiencing homelessness had alleged that local governments forced people into the camp, which stretched for two miles and at one point housed 800-1,200 people, and were now planning to force them back into the cities with no alternative housing plan.

The population had dwindled to near 400 after social workers helped some people find housing. Officials say they have since removed 300 people, including 100 on Feb. 20 alone, but are unsure how many are left because additional people have arrived seeking hotel vouchers.

UNITED STATES — Faith leaders were among those who joined in the "Working People's Day of Action," a Feb. 24 wave of protests against attacks on working people that was part of the effort to continue the unfinished work of the Rev. Martin Luther King, Jr., 50 years after he was killed while supporting striking sanitation workers in Memphis.

Local organizers, speakers and participants including the Poor People's Campaign, the NAACP, immigrant rights leaders, families and students. In Memphis, the Rev. Cleo Smith, who was part of the 1968 sanitation worker strike, led a prayer to kick off the day of action, which honored King's legacy.

The protests, scheduled two days before the Supreme Court was scheduled to hear Janus v. AFSCME, a case which could weaken unions, were convened by Jobs with Justice and held in nearly 30 cities across the U.S. including New York, Washington, Chicago, Memphis, Miami and San Diego.

UNITED STATES — As some schools threaten to suspend students who participate in walk-outs or protests in reaction to the recent school shooting in Parkland, Florida, dozens of colleges and universities are clarifying that their admissions offices will not penalize students who are suspended for non-violent protests.

"Saint Mary's students walk in the footsteps of strong women who used, and continue to use, their voice to make a difference in the world," said Mona Bowe, the college's Vice President for Enrollment Management, in a statement posted on the Saint Mary's College Admissions Facebook page. If a prospective student is disciplined for participating in a peaceful protest, "we will not hold this against her in the admission process."

Other Catholic colleges and universities that have stated they will not penalize students for protesting include DePaul University, Seattle University, Boston College, Loyola Marymount University, Salve Regina University and Santa Clara University. A list of schools that have clarified their policies is being compiled by the National Association for College Admission Counseling.

SASABE, ARIZONA — Leaders of the Catholic religious conferences of the U.S., Mexico, the Caribbean and Latin American, and Canada met for the first time at the U.S.-Mexico border Feb. 23 to offer a prayer service for Dreamers and other migrants.

"We are moved by the anxiety and suffering of the Dreamers to escalate our accompaniment and our resistance to injustice," a press release from the group stated, adding that the country needs to build bridges, not walls.

"I prayed for all Christians everywhere to stand up and refuse to fail our fellow human beings by the complicity of silence," Charity Sr. Teresa Maya said in the press release. "This would be the greater moral failure, to remain silent when human dignity is being refused."