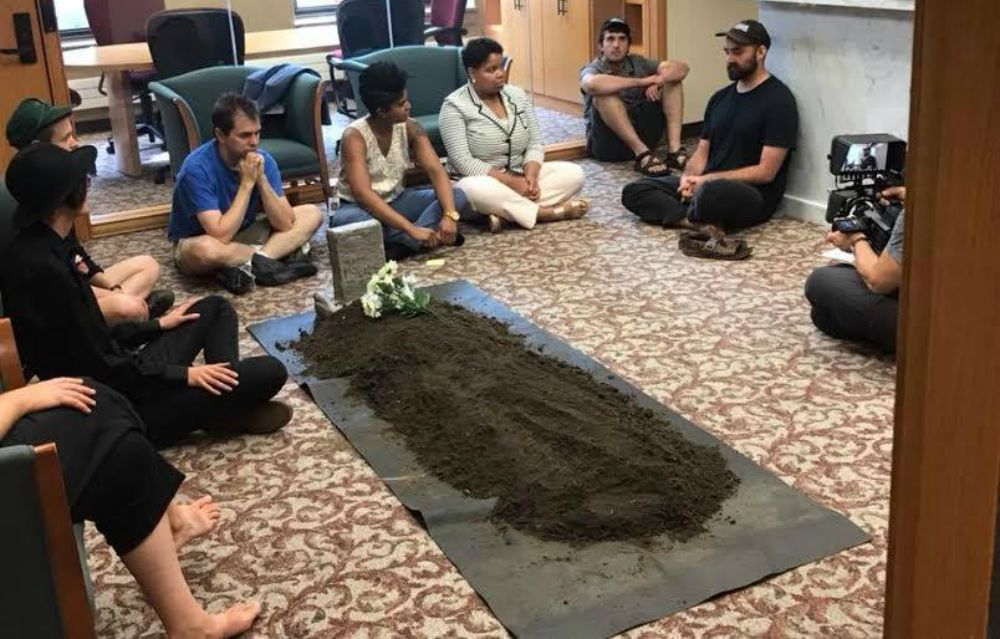 Protesters sit around a mock grave they created June 18 in Minneapolis Mayor Jacob Frey's office to advocate for a moratorium on police funding. The grave represents those killed by the police. (Center for Prophetic Imagination/Jonathan Stegall)

SALEM, Ohio — Local churches stepped up to help families after an immigration raid at a meatpacking plant in Salem, Ohio, led to 146 arrests.

Sr. Rene Weeks, director of Hispanic ministry at St. Paul Parish and a Dominican Sister of Peace, told NCR she was part of a group that worked to support those affected by the raid at Fresh Mark meatpacking plant June 19. That evening, the group cooperated with the local county's Department of Job and Family Services to identify and collect children who would be left alone because of their parents' arrest.

First Christian Church served as headquarters for the community response June 19, as children were placed with relatives, teachers or church members, and other people began arriving to seek information.

"The older children were very upset. The younger children didn't comprehend what was happening. Wives were crying, husbands were distraught," Weeks said.

On June 20, St. Paul hosted a "huge crowd" of people seeking legal advice from immigration attorneys who arrived from Catholic Charities of the Diocese of Youngstown and Centro San José in Canton, Weeks said.

The Diocese of Youngstown also spoke out against the raids and pledged continued support.

"When family separation takes place at the border, or as a result of sudden and unannounced raids in our local communities, the Church decries the terrible impact on vulnerable and innocent children and families. Catholic Charities will be working with local churches and organizations responding to meet the needs of those affected, offering pastoral and practical care," Msgr. Robert Siffrin said in a June 20 statement on behalf of the diocese.

Sixty-six people have been released, either because they were determined to have legal status or because they were the sole caregiver for children (the second category have been assigned court dates). Weeks said she expects those arrested with prior deportation orders or criminal records to be deported quickly, but that attorneys are exploring possibilities for the others.

Community members are also collecting donations in order to provide utilities and food assistance for the next month or two as people who have lost their jobs plan their next steps, Weeks said, and attorneys are preparing to assist people who are ultimately deported plan what they will do with their children.

WASHINGTON — Over 650 faith leaders and faith-based organizations are calling on the Trump administration to renew Yemen's temporary protected status for the maximum allowable time, 18 months, in order to allow the over 1,000 Yemenis already protected to remain in the U.S. They are also asking for a redesignation of the country's status in order to allow more recently arrived immigrants to apply for protection.

Church World Service and the Catholic Legal Immigration Network (CLINIC) delivered a letter from the faith leaders June 20 to the Department of Homeland Security, which must make the status decision by July 5. Currently, Yemen's temporary protected status is set to expire Sept. 3.

The signers point to a war in Yemen which has displaced millions as the reason Yemenis in the U.S. should be allowed to remain.

"More than 25 million people are without adequate food. And there are more than 1.1 million cases of cholera. At least 130 children starve to death or die of disease every single day in Yemen. Under the law, under faith teachings, under morality, the United States must do all it can to protect people and families from this suffering," the letter says.

SEATTLE — June 21, people of faith in Seattle held a prayer vigil and procession from St. Mark's Episcopal Cathedral to St. James Roman Catholic Cathedral in honor of families at the border and in protest of family separation and the exclusion of domestic violence and gang violence as a reason that immigrants can apply for asylum. 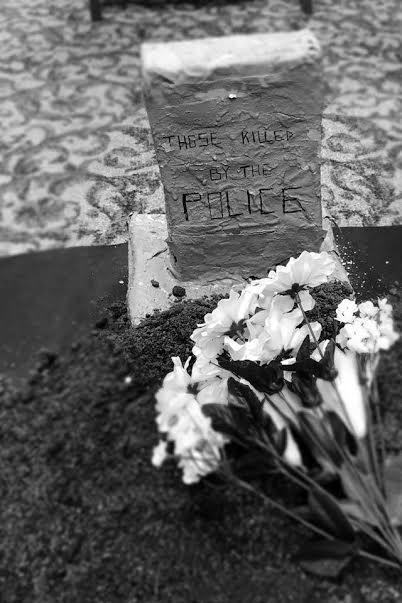 These actions come as faith leaders criticize an executive order from President Donald Trump which ended the administration's practice of family separation but left in place a "zero tolerance" policy for all illegal border crossings and indicated that the administration would speed up court cases and seek permission to detain families with children for longer periods of time.

CLINIC, the Franciscan Action Network and the National Advocacy Council of the Sisters of the Good Shepherd were among those who issued statements against the executive order.

MINNEAPOLIS — Six people, including four Catholic Workers, were arrested in the office of Minneapolis mayor Jacob Frey June 18 as they demanded a moratorium on funding for the police and asked that the mayor's proposed increase in police funding instead be devoted to poverty prevention programs.

The action was part of the Poor People's Campaign and was coordinated by MPD150, The Center for Prophetic Imagination and Rye House, the Minneapolis Catholic Worker.