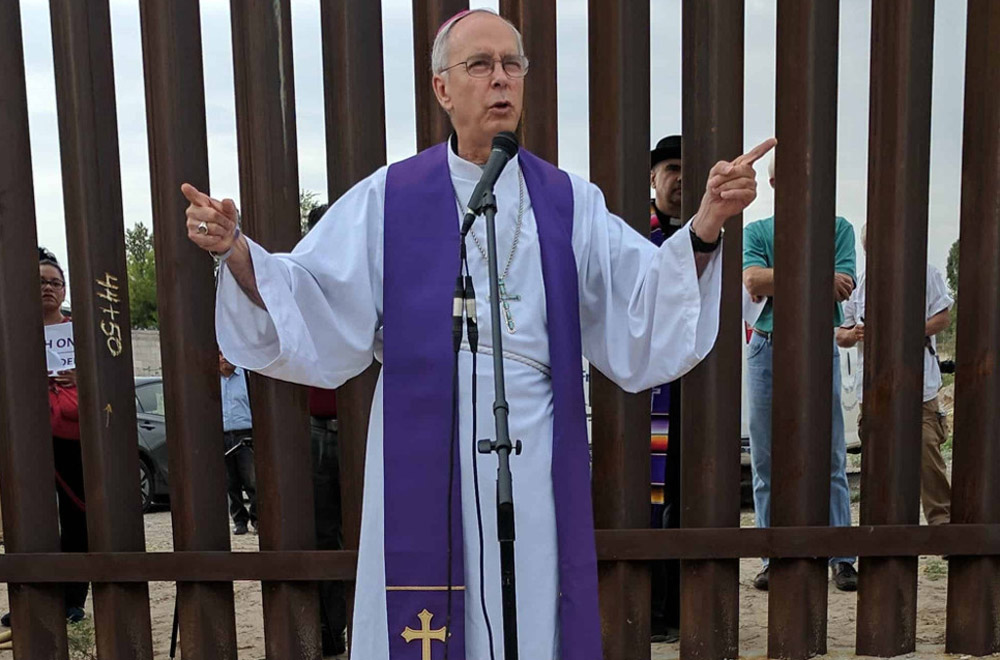 El Paso Bishop Mark Seitz offers a "blessing of this sacred land and these people" during an interfaith service Sept. 7 at the border fence between Anapra, Mexico and Sunland Park, New Mexico. (Courtesy of Auburn Seminary)

SUNLAND PARK, New Mexico — On the same day the Trump administration published new regulations that would extend the amount of time immigrant children could be detained, a group of faith leaders held an interfaith service at the border fence between Anapra, Mexico and Sunland Park, New Mexico, Sept. 7.

According to a press release from Auburn Seminary, the service was part of an immersion experience for immigration organizers called "El Grito de las Fronteras" ("The Cry of the Borders") which also included a teach-in at the University of Texas, El Paso, and a "Jericho Walk" around the El Paso Processing Center, a prison for migrants in neighboring El Paso, Texas.

The experience was part of the All Rights for All campaign hosted at Auburn Seminary's Groundswell platform, and U.S.-based organizers included Camilo Perez Bustillo of the Hope Border Institute in El Paso, Texas; the Rev. Miguel de la Torre of Iliff School of Theology in Denver, Colorado; the Rev. Jennifer Butler and Dan Nejfelt of Faith in Public Life; and the Rev. Katharine Rhodes Henderson and Keisha McKenzie of Auburn Seminary in New York.

Auburn Seminary President the Rev. Katharine Rhodes Henderson, offers a prayer from the border while standing with her fellow faith and clergy leaders Sept. 7 during an interfaith service at the border fence between Anapra, Mexico and Sunland Park, New Mexico. (Courtesy of Auburn Seminary)

PHILADELPHIA — The First United Methodist Church of Germantown in Philadelphia, Pennsylvania, has offered sanctuary to families from Honduras and Jamaica, both with U.S. citizen children, that are at risk of deportation.

Suyapa Reyes, the single mother of the Honduran family, has children ages 13, 7, 2 and 10 months; the older two have been ordered deported along with their mother, while the younger two have not because they are U.S. citizens.

Reyes came to the U.S. fleeing violence and drug trafficking and to save her children from the choice of joining a gang or being killed. Her request for asylum was denied in 2017 and in August 2018 she was directed to leave the country by Sept. 14.

Meanwhile, the children in the Jamaican family, ages 15 and 12, are both U.S. citizens but their parents, Clive and Oneita Thompson, were denied asylum in 2009 and lost their appeal last month. They came to the U.S. fleeing violence; in Oneita's case a gang had burned her family farm and murdered her brother.

First United Methodist was part of the sanctuary movement in the 1980s, and has continued its work as part of the "new sanctuary movement." Churches that offer sanctuary use immigration officials' policy of not usually conducting enforcement actions in "sensitive" locations, like churches and schools, to shield immigrants who are at risk of deportation by allowing them to live on church property.

WASHINGTON — Catholic Worker Art Laffin was one of the 39 people arrested May 29 outside the Washington, D.C. office of Senate Majority Leader Mitch McConnell (R-Kentucky) while protesting militarism as part of the Poor People's Campaign. Laffin was convicted of disorderly conduct Sept. 7 and sentenced to time served and a $50 fine.

Laffin had joined Dominican Srs. Ardeth Platte and Carol Gilbert and fellow Plowshares activist Mike Walli in requesting a court date instead of paying a $50 fine so they could continue their witness in court. Charges were dismissed for Platte, Gilbert and Walli by July 16, but not for Laffin.

According to a Sept. 9 email from Laffin, Platte and the Rev. Graylan Hagler, senior pastor at Plymouth Congregational Church, were called as witnesses.

GEORGIA — Approximately 20 peacemakers reached the midpoint of a "Disarm Trident Peace Walk" from Savannah, Georgia, to the Kings Bay Naval Submarine Base in St. Marys, Georgia, Sept 8, according to a press release from the walk's organizers. The 110-mile journey, in support of seven Catholic activists who were arrested for entering the submarine base to protest nuclear weapons April 4, will take 11 days.