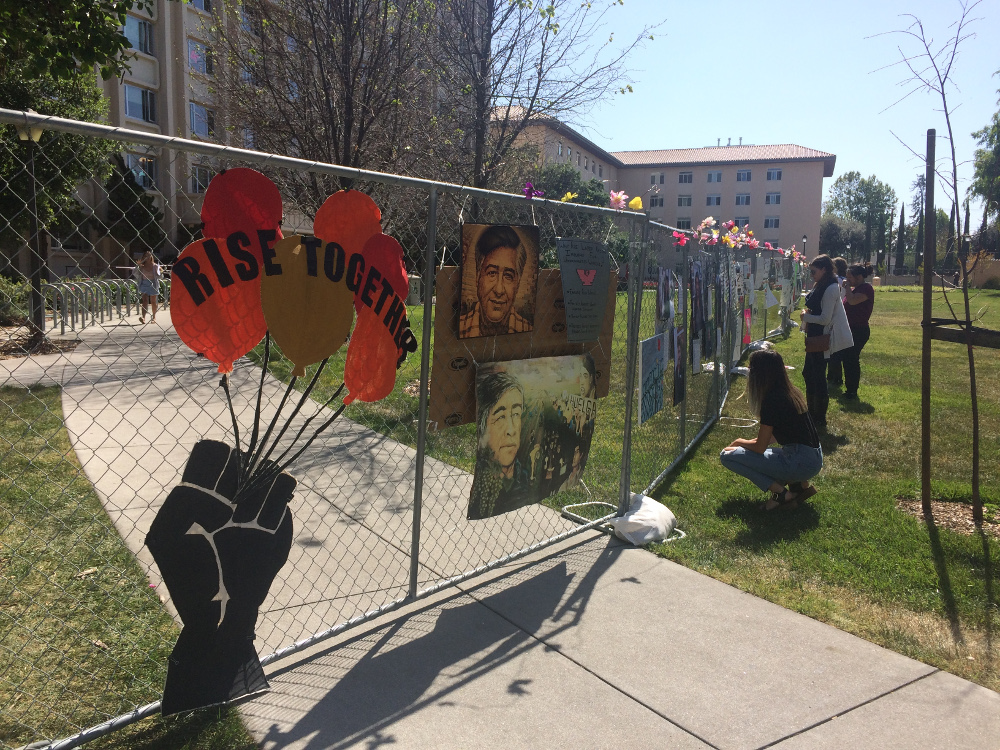 A "Mock Border Wall" between Swig Hall and McLaughlin-Walsh Hall on the campus of Santa Clara University, pictured April 30, symbolically represents the obstacles migrants face. It is in place for the university's Immigration Week April 30-May 4. (Photo by Meredith Anderson)

SANTA CLARA, CALIFORNIA — Santa Clara University, a Jesuit school in Santa Clara, California, kicked off April 30 its seventh annual Immigration Week 2018, according to a press release from the university.

Immigration Week features a "Mock Border Wall" — a chain link fence that stretches between Swig Hall and McLaughlin-Walsh Hall in an effort to symbolically represent the obstacles migrants face. Guided tours of the wall will present information about governmental policies and factors that push immigrants out of their home countries and pull them to move to the U.S.

Other events during the week include a day worker panel April 30, a multicultural fair and open mic night called UndocuCafe May 1, a lawful entry simulation May 2, an educational session on the intersection of environmental issues and immigration May 3 and an UndocuAlly Training hosted by the Undocumented Students and Allies Association May 4.

BRISBANE, AUSTRALIA — Two Catholic Workers, Jim Dowling and his son Franz, protested outside St. Stephen's Cathedral in Brisbane, Australia, where an Anzac Day service involved soldiers carrying rifles in the church, according to The Catholic Leader.

Anzac Day is a national holiday is Australia and New Zealand and memorializes those who have been killed or who served in armed conflicts.

The father-son pair, who were told the practice would not change after they wrote to the church, stood outside with a sign that read "No Guns in the Cathedral." They said they were not opposing memorial services or Anzac Day in particular, but believed guns did not belong in church.

WASHINGTON — The law firm Keker, Van Nest and Peters filed an amicus brief on behalf of 11 religious organizations including the Catholic Legal Immigration Network (CLINIC), Benedictine Sisters of the Federation of St. Scholastica, the Conference of Benedictine Prioresses and the Conference of Major Superiors of Men related to Attorney General Jeff Sessions' review of a domestic violence asylum case.

The case, known as Matter A-B, concerns a woman from El Salvador seeking asylum due to domestic abuse. Sessions has said he is reviewing the Board of Immigration Appeals' decision on the case to determine whether being a victim of "private criminal activity" can qualify someone for asylum.

His decision could limit the ability of victims of domestic violence or gang violence to seek asylum, and the amicus brief signers say it could also harm victims of religious persecution, who are often harmed by non-state actors.

CHICAGO — Interfaith Worker Justice is urging its supports to submit comments to the U.S. Department of Agriculture in opposition to a proposed rule change that would remove line speed restrictions in pork plants that are aimed to protect workers' health and safety and would reduce the number of government inspectors required at the plants.

In the past, the organization was part of a successful campaign to oppose line speed increases in the chicken industry. For the current proposal, comments are due by May 2.