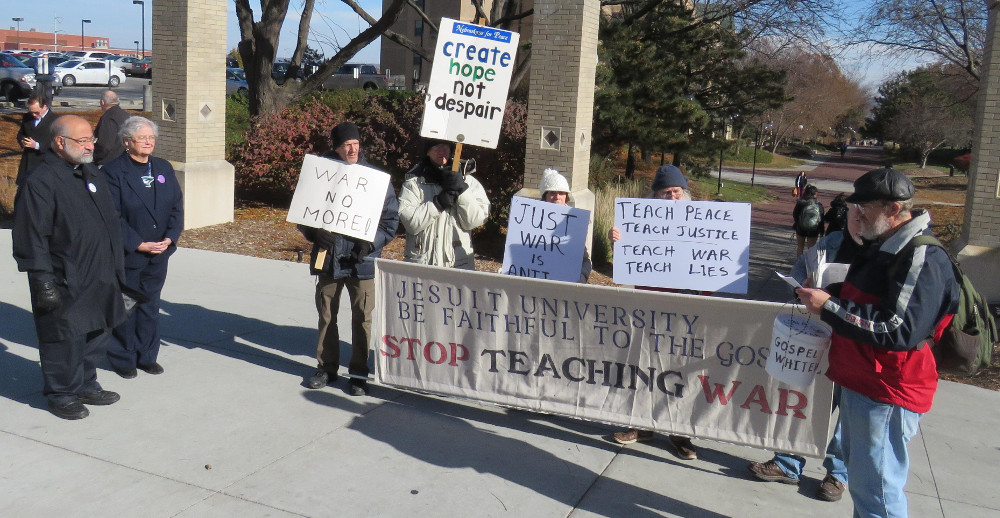 OMAHA, NEBRASKA — Catholic Workers, Veterans for Peace and members of Nebraskans for Peace were among the eight people who attended a vigil outside of Creighton University's ROTC building Nov. 16 as part of a national campaign to encourage Jesuit universities to stop hosting ROTC programs called Teach War No More.

At the end of their protest, the activists marched to the Jesuit community building. Activist Mark Kenney read a letter which used Biblical quotations to support their call for non-violence as they presented a bucket of white paint to Jesuit Fr. Andy Alexander, director of the Collaborative Ministry Office and Eileen Burke-Sullivan, vice provost of mission and ministry, who were representing the Jesuit community and Creighton University.

"Please accept this bucket of whitewash as a gentle reminder not to use it to conform to the world around you. May you never have need to open it again. May you advocate, with the zeal and authority of Jesus, to remove worldly military training centers from your Catholic campuses," the letter concluded.

On the same day, also the anniversary of the deaths of six Jesuits and two women in El Salvador at the hands of U.S.-trained soldiers in 1989, the Los Angeles Catholic Worker hosted a vigil at Loyola Marymount University. According to Catholic Worker Matt Harper, the group faced a counter-protest from veterans and the school's Young Americans for Freedom chapter, but had "a lot of good engagement and conversation."

Activists also held vigils at over half of the 17 Jesuit universities that host ROTC programs, including Marquette University, Loyola University Maryland, Georgetown University, Fordham University, College of the Holy Cross, Santa Clara University and the University of Scranton.

WASHINGTON — On Nov. 16, a coalition including MomsRising, Herd on the Hill, Mormon Women for Ethical Government and UndocuBlack visited Capitol Hill in honor of Thanksgiving to deliver turkey-shaped cookies to members of Congress and tell them why they are grateful for the immigrants in their lives.

According to a Nov. 15 press release from MomsRising, the group's goals included encouraging Congress to pass a clean Dream Act and to take action to protect the legal status of Temporary Protected Status recipients.

Martha Lorena Rivera, a Mexican mother of three who settle in Alamogordo in 2002 and has been granted a stay of removal for the past several years, was denied an additional stay during her annual meeting in October. She sought refuge at the retreat center after officials released her, with a tracking bracelet, to arrange for care of her 8 year old child.

Rivera joins Jorge Taborda, a Colombian father whose wife was deported, who is already being protected at the retreat center.

Fr. Tom Smith, director of the center, said it is not strictly offering sanctuary since they would have to allow an ICE agent with the proper warrant to enter. However, he said the decision to shelter Rivera is an expression of Franciscan hospitality and will likely protect her since ICE agents "have not gone onto church properties."