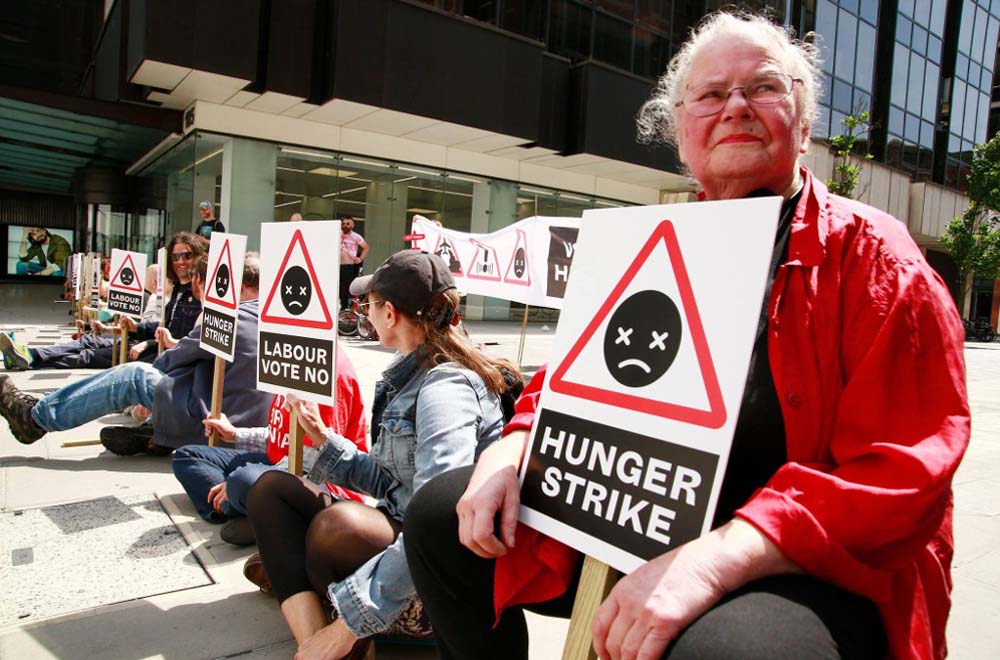 Residents from the Heathrow area and campaigners from Vote No Heathrow are pictured June 9 on their first day of a hunger strike at Unite the Union's headquarters. They are calling on unions to support their call to members of the United Kingdom's Parliament from progressive parties to oppose the expansion of Heathrow Airport. (NQ Photography/Natasha Sakalasuriya)

WASHINGTON — The Council of Bishops of the African Methodist Episcopal Church, the Franciscan Action Network and the Poor People's Campaign were among those who strongly condemned attempts to justify the Trump administration's separation of immigrant families by using Scripture.

In press releases June 15, the day after Attorney General Jeff Sessions and White House Press Secretary Sarah Huckabee Sanders said it was biblical to obey and enforce the law, with Sessions referring specifically to Romans 13, the three faith-based groups criticized the interpretation of the verse and pointed out it had been used to justify evils such as slavery in the past.

"This practice of using 'proof text' — scriptural text out of context to achieve some wicked end — is as ancient as the temptation of Jesus by Satan in the Wilderness (Luke 4). The founders of this nation used the same tactics to enslave our African forebears by lifting from the writings of the Apostle Paul passages to condone slavery and to break their spirit," the bishops' council said.

The Franciscan Action Network pointed out that the chapter also calls on Christians to "love one another" and not do evil to their neighbors, calls they said were inconsistent with family separation, while the Poor People's Campaign co-chairs called the comments "anathema to any person of faith" and said "any politician who supports his position is an accessory to these crimes against children and humanity."

The four fast participants are calling for the exoneration of the Kings Bay Plowshares 7, a group of peace activists who were arrested April 4 after they entered the Kings Bay Nuclear Submarine Base carrying hammers and baby bottles of their own blood to hang banners and place crime-scene tape. 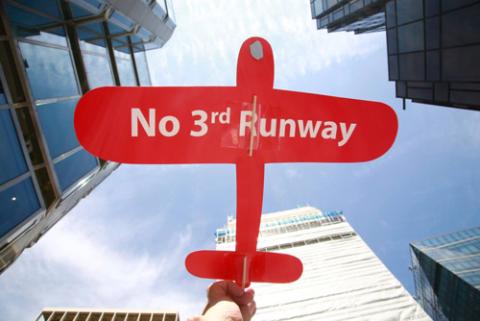 A protester holds a sign June 9 on the first day of a hunger strike at Unite the Union's headquarters. (NQ Photography/Natasha Sakalasuriya)

LONDON — Catholic Worker Richard Barnard of the Kent Christian Peace Activists is among a group of hunger-strikers calling on the Labour Party and the trade union Unite to oppose the addition of a third runway at Heathrow Airport.

A group of 35 people gathered outside union and party buildings June 9 to begin the hunger strike, holding signs, with some pledging to continue the strike until members of Parliament agree to vote against the runway. The protesters oppose the runway for environmental reasons, calling it "a massive carbon infrastructure" and saying it will "make West London one of the most polluted and noisiest places in Europe."

NORWALK, OHIO — Tiffin Area Pax Christi was one of the organizers of a Rally for Justice in Immigration in Norwalk, Ohio, to protest immigration raids at two local Corso's Garden and Flower Center locations, which resulted in the arrest of more than 100 people.

According to an article posted on the Pax Christi website June 14, dozens of people attended the June 11 rally. Many of the speakers focused on the children and other relatives left behind because of the arrests. A small group of counter-protesters also attended.