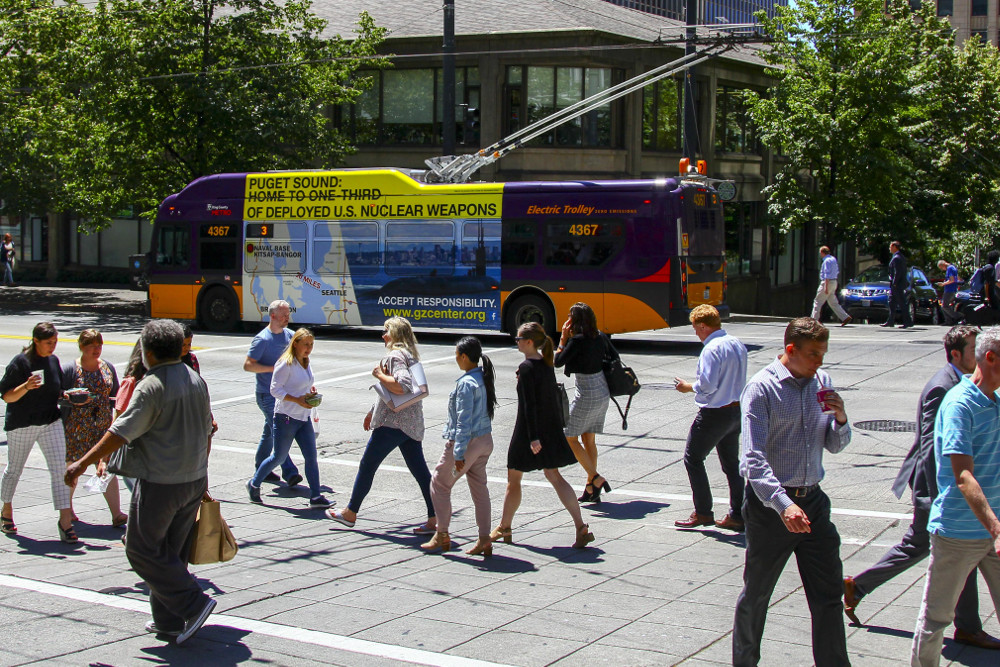 A trolley with an ad sponsored by the Ground Zero Center for Nonviolent Action to call attention to nuclear weapons is pictured in Seattle July 2018. (Intersection)

SEATTLE, Washington — For at least four weeks beginning July 9, up to 39 Metro downtown buses in Seattle will carry ads paid for by the Ground Zero Center for Nonviolent Action to call attention to nuclear weapons in the area.

The ads read "Puget Sound: Home to One-Third of Deployed U.S. Nuclear Weapons. Accept Responsibility" and include a photo of Trident submarine USS Nebraska, the website address for the Ground Zero Center and a map showing the proximity of Naval Base Kitsap-Bangor to Seattle.

According to a July 5 press release from the Ground Zero Center, the Kitsap-Bangor base houses eight of the Navy's 14 Trident nuclear submarines; the other six are housed at the Naval Submarine Base Kings Bay in Georgia. The release also says that 540 of the 1,345 deployed strategic nuclear weapons on ballistic missiles are on the six operational submarines at Bangor.

WASHINGTON — The Catholic Legal Immigration Network (CLINIC) has called for a day of advocacy for the extension of Somalia's temporary protected status.

According to a July 12 email from CLINIC, Somalia is suffering from "widespread and brutal conflict, displacement and mass hunger" which make it unsafe for returning nationals. The Department of Homeland Security (DHS) is required to make a decision by July 19; CLINIC is calling for the status to be renewed for the maximum of 18 months and also redesignated so that more recent immigrants can qualify.

CLINIC is also collecting signatures from non-profit organizations for a letter asking that Guatemala be designated for temporary protected status due to a deadly volcanic eruption.

Over 100 people were killed, hundreds left missing, 13,000 displaced, and at least 1.7 million affected when Volcán del Fuego unexpectedly erupted in Guatemala. At least 1,000 homes were destroyed, along with infrastructure including roads, bridges, schools and part of the electric grid. Guatemala's president has asked DHS to grant the country temporary protected status, which could shield over 525,000 people living in the U.S.

After two years of discussion and a unanimous vote by the parish council, the parish is now prepared to host immigrants with no criminal records who have exhausted all other options to stay in the country.

Sanctuary churches protect immigrants by allowing them to live on church premises, taking advantage of immigration officials' policy of not typically entering "sensitive" locations, such as churches and schools, to enforce immigration laws.

The actions will consist of a prayer service and nonviolent witness at the Pentagon Aug. 6, a prayer service of repentance at the White House Aug. 9 and a call for the abolition of all nuclear weapons in the U.S. and the world.