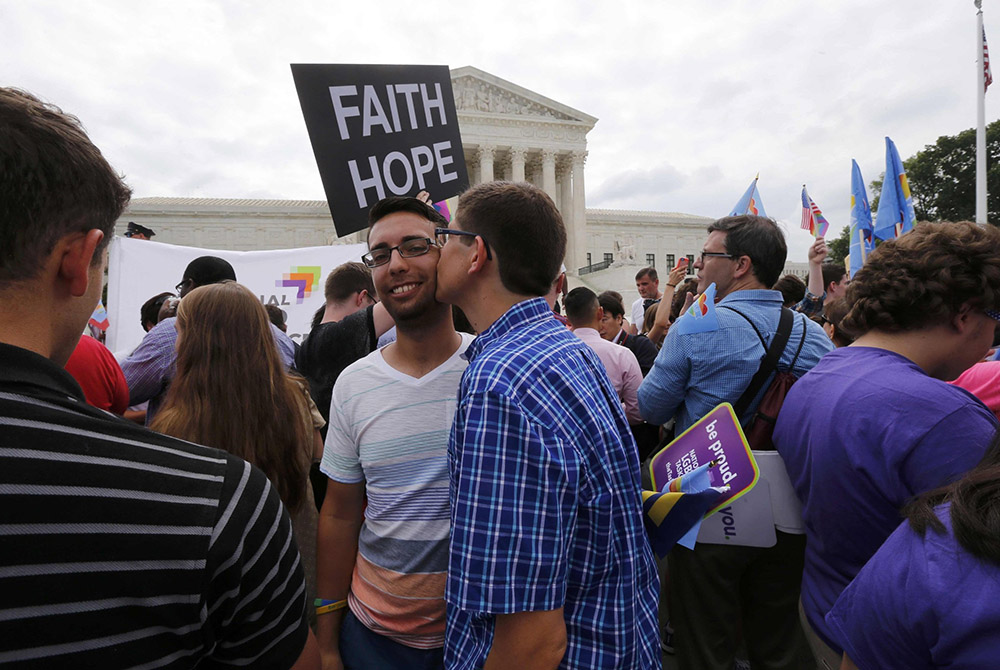 Supporters of same-sex marriage celebrate outside the U.S. Supreme Court building in Washington June 26, 2015, after the justices ruled in a 5-4 decision that the U.S. Constitution gives same-sex couples the right to marry. Over 3,000 Catholic theologians, clergy, religious, and laypeople signed a pledge to support LGBTQ couples in response to a Vatican statement banning blessings for same-sex unions. (CNS/Reuters/Jim Bourg)

More than 3,000 Catholic theologians, clergy, laypeople and organizations have pledged to support LGBTQ couples in the face of the recent Vatican decree banning priests from blessing same-sex unions.

Their pledge, which was launched by the Catholic support group New Ways Ministry, affirms the faith and dignity of LGBTQ individuals and couples.

The pledge also urges Pope Francis to repeal the Vatican decree, released March 15 by the Congregation for the Doctrine of the Faith with the pope's approval. The decree said priests could not bless same-sex unions, as God "cannot bless sin."

"Our Catholic faith and tradition compels us to respect and honor the faith journeys of LGBTQ people," the New Ways pledge says. "We know that those who enter into committed relationships do so out of love which is divinely inspired and supported."

The theologians were joined by hundreds of clergy members, vowed religious and church-employed laypeople, as well as five U.S. communities of women religious and over 50 Catholic organizations.

More than 1,800 of those who signed were from the United States, according to a New Ways Ministry press release, while the rest represented over 40 nations worldwide.

Cristina Traina, the Avery Cardinal Dulles, SJ Chair in Catholic theology at Fordham University, who signed the pledge, said the response to the Vatican statement from Catholics worldwide has been encouraging.

"There's a groundswell of support for same-sex couples within Catholicism that we're seeing," she said in an interview. "What we're seeing is not just the whim of the weak, but a deep-seated and broader response that is indicative of the Holy Spirit moving."

Those who signed the statement pledged to "find new ways to affirm and bless all LGBTQ people, whether they are single or in a committed relationship" and to pray that the Catholic Church will listen to LGBTQ people, learn from them, and grow as a church.

Natalia Imperatori-Lee, professor of religious studies at Manhattan College, said signing the statement was a "no-brainer" for her. She said the Vatican statement was "bad teaching."

"I'm hopeful that one day the church will come around to where the people of God already are," Imperatori-Lee said.

Brad Hinze, a professor of theology at Fordham University, said he saw how hurtful the Vatican statement was to so many LGBTQ people in his life. He said witnessing how some Catholic congregations actively welcome them has shown him what the church could be if it listened to and learned from LGBTQ people.

"It's a sign of their own experience of God's grace and God's love in the midst of that community," Hinze said. "Wow, what a wonderful thing!"

"I'm hopeful that one day the church will come around to where the people of God already are."
—Natalia Imperatori-Lee

Both Salzman and Hinze said there was a "tension" between the Congregation for the Doctrine of the Faith's statement and Francis' more sympathetic statements and pastoral attitude towards LGBTQ people.

"Whether you're a member of the LGBTQ community or one of their allies or a family member, you feel that contradiction very keenly," Hinze said.

Melissa Pagán, an assistant professor of religious studies at Mount St. Mary's University in Los Angeles, said as a queer person in a committed relationship with another woman, she was personally "disappointed and disgusted" by the Vatican statement. 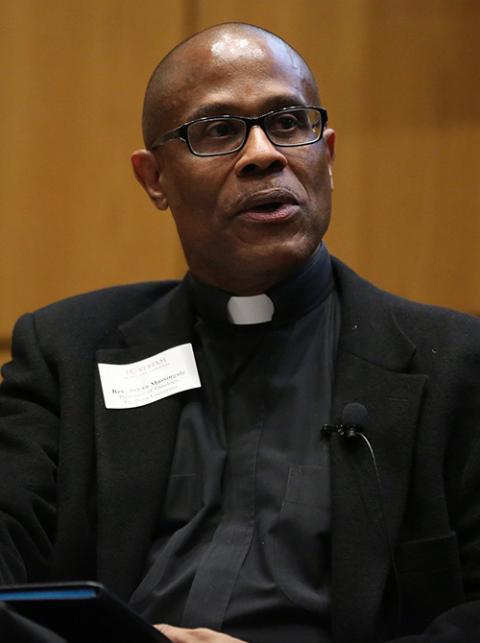 She said she signed the New Ways pledge in part because she's seen how the church's stance on LGBTQ rights has driven many young Catholics out of the church.

Massingale told NCR he's talked to dozens of gay and lesbian Catholics in the two weeks since the statement was released. For some, he said, the decree was the final straw that drove them to leave the church.

"They can't find a way to stay in the church if the church says their love is not worth being blessed by God," he said.

More than 900 of the people who signed the pledge did so anonymously. Massingale said this points to a culture of fear the church has created that prevents people from defending LGBTQ rights.

"Many who work in the church feel they cannot be honest about their convictions without jeopardizing their livelihoods," he said.

Pagán said, however, that many Catholics and individual parishes are far more welcoming than the Vatican statement would suggest.

"The broader view understands that human dignity is reflected in each and every individual, that same-sex couples are moved in and though the Spirit to be with one another and that [their] love is not able to be dismissed as outside the realm of being deserving of blessing," Pagán said.

"A God that can bless a house, a plane, a boat, but cannot bless love is a God we cannot believe in. This is not a question of sexual morality. ... It's a question of what God we believe in."
—Fr. Bryan Massingale

"A God that can bless a house, a plane, a boat, but cannot bless love is a God we cannot believe in," Massingale said. "This is not a question of sexual morality. ... It's a question of what God we believe in."

A version of this story appeared in the April 16-29, 2021 print issue under the headline: Value of same-sex unions affirmed.