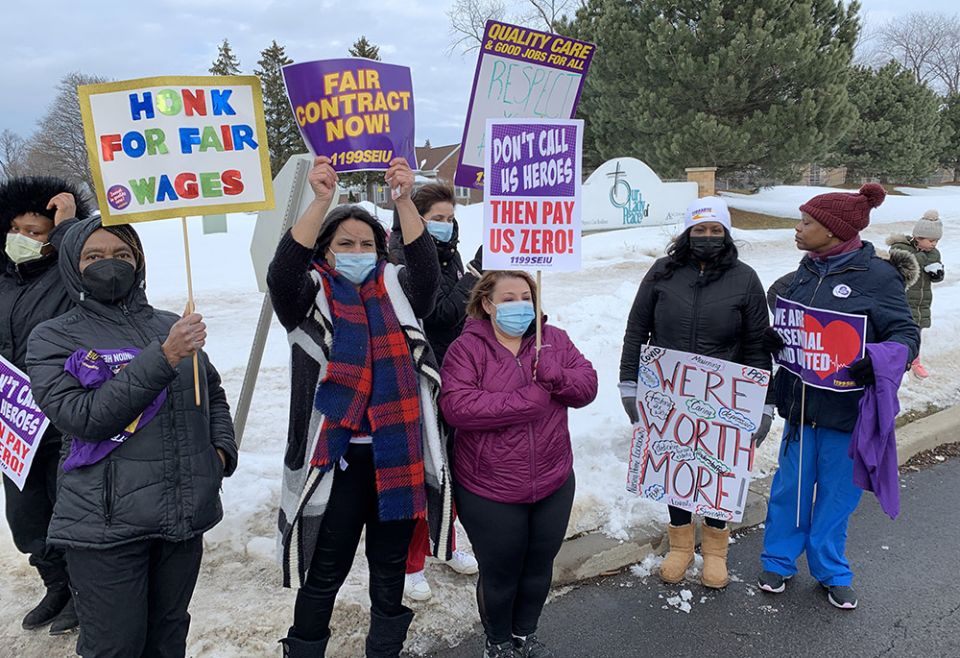 Caregivers at Our Lady of Peace nursing home have been without a contract that outlines wages and benefits, and with no job security, since Dec. 31, 2021. Located in rural New York, just 20 minutes from Niagara Falls, the nursing care residence is a part of Ascension Living's Catholic health system.

In response, workers participated in an information picket in February and a one-day strike in early March. Also, in March, a group of workers traveled to St. Louis to protest and hold a press conference on the steps of Ascension Living's headquarters.

Caregivers are calling for Ascension Living to practice its promise to serve the poor and its commitment to integrity and reverence by offering competitive wages to workers and address the understaffing in the facility.

Ascension is the largest tax-exempt health system in the U.S. For years, it has come under scrutiny for the way front-line workers are underpaid and understaffed, while Ascension CEO's and company continue to profit.

Workers at Our Lady of Peace nursing home are being represented by 1199SEIU United Healthcare Workers East* in their fight for a new contract.

"It doesn't make us feel that we're worth much. You need us to run your building but you don't want to pay up. You're paying the administration, the higher-ups, but the little guy who's actually running the show gets nothing," Tresa Torcasio, a licensed practical nurse, who has worked at Our Lady of Peace for 15 years, told NCR.

Torcasio, a Catholic, prays with many of the residents who are nervous about their wing closing in the residence. She says she also prays every day that Ascension will realize the value of their workers.

"We are the heart and soul of what's going on in that facility," she said. 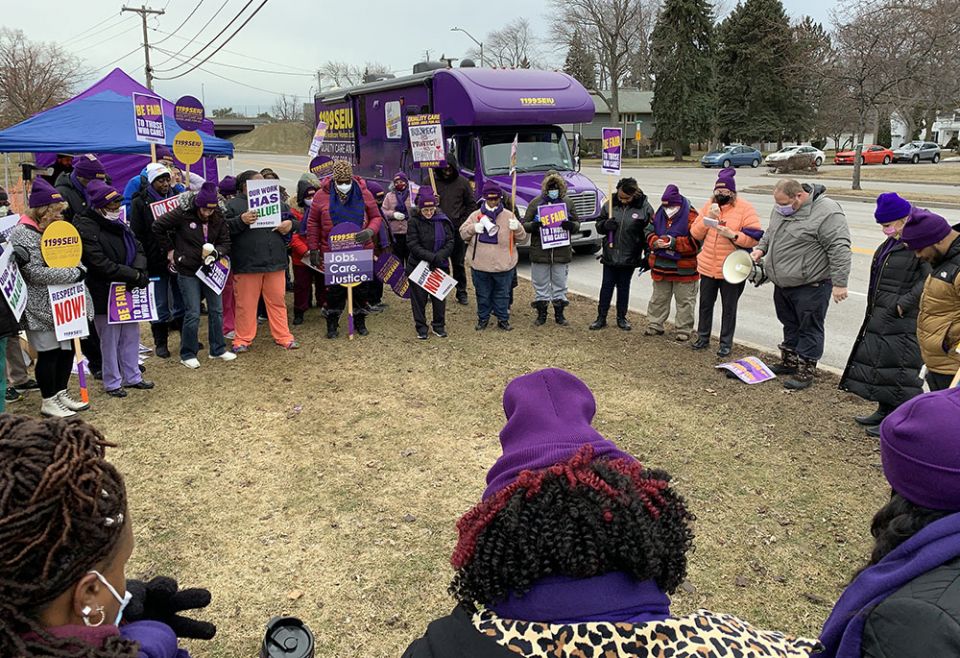 On the portion of its webpage about staff, Ascension states "we're all in this together," but front-line workers feel abandoned.

"We are proud of the selfless care our associates provide our residents every day. We have been bargaining in good faith with 1199 Service Employees International Union - United Healthcare Workers East (SEIU) and are looking forward to reaching a mutually beneficial agreement," Molly Gaus, Ascension's vice president of marketing and communications at Ascension Living, said in a statement emailed to NCR.

"They [Ascension Living] don't treat us as equals. They don't treat us like people," Krista Diez*, another licensed practical nurse, who has worked at Our Lady of Peace for four years, told NCR.

Workers at Our Lady of Peace say Ascension's wage proposals remain below other facilities in the area, making them less competitive when it comes to recruiting new workers. There are job openings posted, but workers believe applicants are reluctant to work here because the rates are much higher elsewhere.

And without a contract, workers from housekeeping or laundry can be placed anywhere, including outside of their department.

Diez describes an uneasy atmosphere, as workers, residents and their family face uncertainty.

"At this point in the game, I can go someplace else and make $5 more an hour, but I'm not going to desert my residents. I love them and I want to stay and take care of them. That's the reason I'm there," said Torcasio. 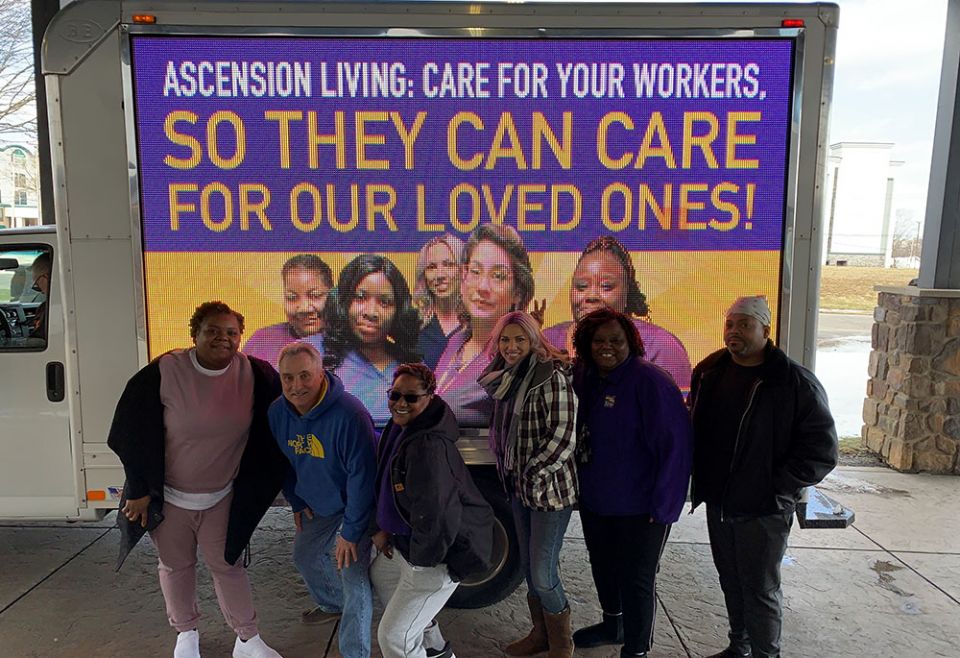 Ascension Living workers at Our Lady of Peace pose in front of a billboard. (Courtesy of 1199SEIU United Healthcare Workers East)

Diez says that she and other staff members, some of whom have been there 20 to 30 years, take pride in their work, and that it's sad to see Ascension not help their workers by offering higher wages.

This is not the only labor dispute Ascension has faced.

Workers in Wisconsin and Michigan have also demanded that front-line workers be treated with respect and better pay for their labor during the pandemic. From 2015-2018, former CEO of Ascension, Anthony Tersigni, sparked outrage for making nearly $13 million in one year, later stepping down. Additionally, Ascension has come under fire for its anti-union activity.

Days before the one-day strike at Our Lady of Peace, Ascension Living threatened to lock out workers for five days. In response, the union filed an unfair labor practice charge with the National Labor Relations Board, accusing Ascension Living of violating workers' rights. On March 7, Ascension ended the lockout.

Caregivers say lack of staffing hurts the most vulnerable at the facility, leaving residents with only the bare minimum of care. When residents do not receive one-on-one time with the nurses, services such as extra cutting of nails or someone to play cards with disappear.

The uncertainty that can come with a strike has left residents and their families fearing that they will not be able to find a new place to live. But many residents settled there thinking it would be the last place they would live.

"Adjusting to the nursing home in the first place is a huge shift in someone's life," Diez said. "And then having to do it again because of management's poor choices?"

Diez said that the workers saw more residents than usual pass away during the pandemic. Between the visitor restrictions and the workers who had to miss work because they had COVID-19 or workers who quit for fear of getting infected, it was an environment unlike anything Diez has seen in her 21 years of nursing.

COVID-19 has also placed an additional burden on the workers at Our Lady of Peace. During the first year of the pandemic, nurses were asked to wear the same N95 mask for a week and did not receive any additional bonuses for working as front-line nurses in the beginning, Torcasio said. Workers are still seeing residents who test positive for COVID-19, she said.

On March 21, 2022, caregivers returned to the negotiation table. Workers at the facility are still without a contract. Bargaining between 1199SEIU and Ascension Living resumed on March 28.

*This story has been updated to correct the union's name and the spelling of Diez's last name.

A version of this story appeared in the April 15-28, 2022 print issue under the headline: Caregivers fight for better wages .