Bishops listen to grim landscape of policy on the immigration front 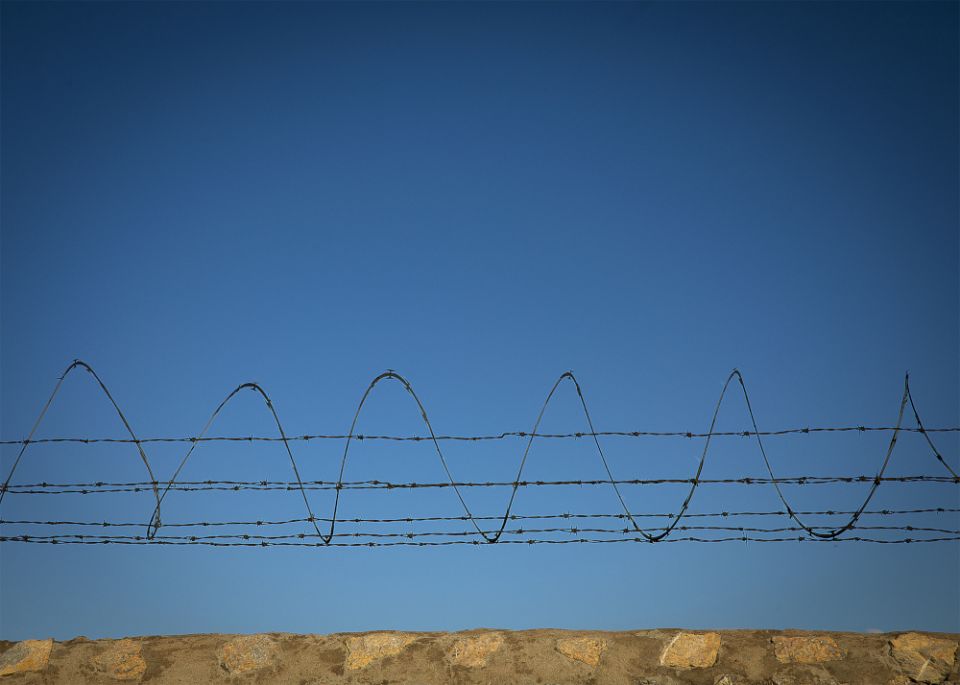 A border fence is seen Sept. 24, 2019, between El Paso, Texas, and Ciudad Juarez, Mexico. Meeting in Baltimore for their fall general assembly, the U.S. bishops heard a grim report Nov. 12 on the policy landscape facing immigrants and refugees trying to find shelter in the United States. (CNS/Tyler Orsburn)

Baltimore — In a wide-ranging report on immigration Nov. 12, U.S. bishops heard a grim landscape facing immigrants and refugees trying to find shelter in the United States. But they also heard of the wide network of Catholic organizations trying to help, even as they, too, face challenges.

Los Angeles Archbishop Jose Gomez, president-elect of the U.S. Conference of Catholic Bishops, spoke of how the reduction in the number of refugees allowed into the U.S. had led to the closing of 18 Catholic Charities programs around the country that had been serving refugees for over 40 years.

That's because the cap on how many refugees are allowed to enter the U.S. keeps being cut by the Trump administration. The administration approved just 18,000 refugees to be admitted for fiscal year 2020, when the average number allowed under other administrations, Republican and Democrat, was about 95,000, Gomez said.

"What is going on here is truly a great reduction in our commitment to refugees," Gomez said. "What is concerning is that we are cutting these numbers at a time when the need is greatest."

The report focused on refugee resettlement, the Deferred Action for Childhood Arrivals program, Temporary Protected Status and the humanitarian crisis at the southern border with Mexico – programs widely backed by the body of bishops, financially and through policy efforts.

"We remain extremely concerned about this situation and our nation's commitment to providing safety and refuge for those facing life-threatening persecution along with the reduction in refugees," Gomez said. "We also face an executive order there that allows state and city officials to turn away refugees from their communities."

It's creating "a confusing patchwork across the country," where some localities welcome refugees and others refuse them, Gomez said.

Bishop Joe Vasquez of Austin, Texas, chairman of the bishops' conference's Committee on Migration, provided an update about policies at the U.S.-Mexico border and their implications on human life and dignity. He said this year saw one of the highest volumes of apprehensions at the border.

"There certainly have been years where more people have attempted to come across the U.S. border," he said, but "the proportion of vulnerable children and families migrating were unusually higher. Our Catholic charities and dioceses have been assisting families at the border by providing humanitarian respite and care and have been widely recognized for this work."

But the administration has responded to the high number of arrivals with policies that greatly curtail their chances of getting in, namely the Migration Protection Protocols, known popularly as the "Remain in Mexico" policy that requires almost all individuals seeking asylum in the United States to wait in Mexico while they have their immigration claim reviewed, Vasquez said.

"While this policy may seem reasonable, in theory, the practical impact of the policy is that asylum-seekers, including many families, must wait in very dangerous and unsafe conditions for long periods of time in order to exercise their legal rights," he added.

"For example, in certain sectors of the southern border, they may have to wait for several months for their immigration hearing," the bishop said. "During that period, families have little access to decent housing and there are few lawyers to help them prepare their cases."

Another policy of great consequence is the president's asylum rule, he said.

The U.S. Supreme Court has allowed it to be implemented while the legal case winds its way through the lower courts, he said, but the rule, poorly understood by many asylum-seekers, leaves thousands stranded in Mexico.

"We are very concerned about the high number of people waiting in Mexico at this time," Vasquez said. "A particular worry are the families who have mental and physical health disabilities and pregnant women who should not be subject to these new rules but are still sometimes forced to wait in dangerous conditions. This contradicts the administration's own policy guidance and does not respect the dignity and the fragility of human life."

The human consequences of these policies are immediate and grave, he said.

"There are drastically lower arrival numbers at the U.S. and Mexico border with many individuals facing aggressive deterrence or exploitation in Mexico along their journey," Vasquez continued. "There are intense humanitarian needs on the Mexican side of the border, which lacks the infrastructure necessary to address those needs and suffers from civil disorder and the presence of gangs.

"There are approximately 60,000 people waiting in Mexico with numbers only increasing as the new policy is further implemented along the U.S.-Mexico border." 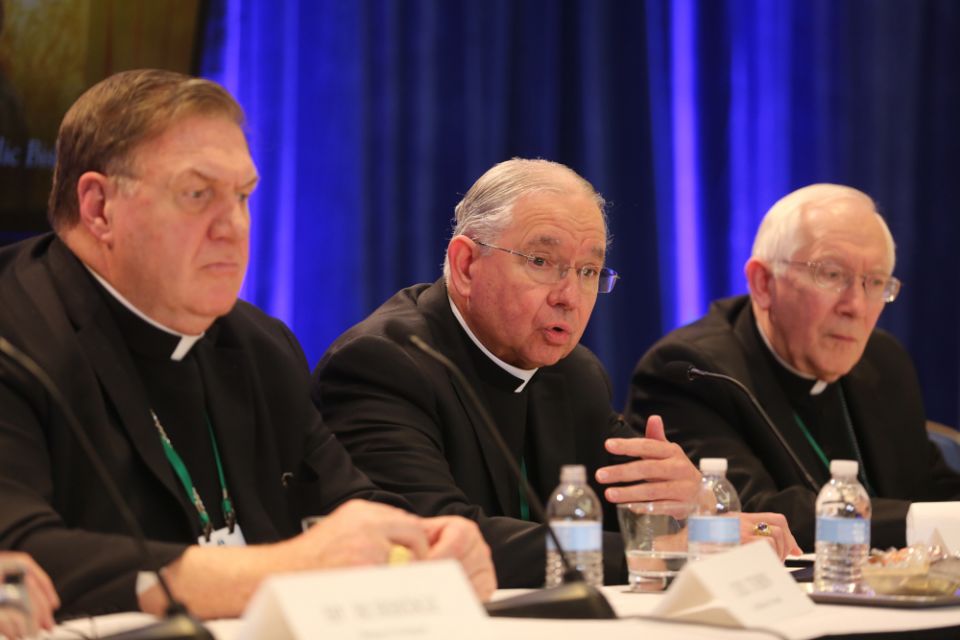 Archbishop Jose Gomez of Los Angeles, president-elect of the U.S. Conference of Catholic Bishops, responds to a question during a news conference at the fall general assembly of the bishops' conference in Baltimore Nov. 12, 2019. Also pictured are: Cardinal Joseph Tobin of Newark, N.J., and Archbishop Leonard Blair of Hartford, Conn. (CNS/Bob Roller)

During the comment period following the presentation, many bishops voiced their sadness at the situation and implored the conference to do more to help. One of them was Metropolitan-Archbishop Borys Gudziak of the Ukrainian Catholic Archeparchy of Philadelphia.

"What you are showing us and what I see here in society is a matter of tears," he said. "This country was always hospitable. This country needs immigrants for its economy. This tenor of hate that is propagated is something that is really problematic and it spreads from the U.S. to other countries. It's taken as a model to deal with people on the move."

He said bishops need to be "vociferous and clear on these issues in the public forum."

Miami Archbishop Thomas Wenski urged action, particularly on the DACA program, for which the Supreme Court heard oral arguments Nov. 12 – but it will be June before a ruling is issued on whether the program was ended legally. By then, the country will be distracted by political conventions leading up to the November presidential election, the archbishop said.

Bishop Mark Seitz of El Paso, Texas, categorized the happenings on the immigration front as "a battle for the soul of our country."

He spoke of a humanitarian crisis on the other side of the border, as thousands of migrants are stranded in dangerous territories because of U.S. policy.

"They have fled their home countries and they cannot go back without facing serious consequences and they can't go forward," he said. "We cannot, as the church that has the name universal, turn our eyes from this crisis right at the door of our country."

Some have stopped looking at the problem simply because the numbers of people coming into the country have dwindled, but that doesn't mean the problems driving them here have stopped, he said.

"I ask you to be conscious of this need and do what you can to support any efforts to assist those people that are left there in this limbo," he asked the body of bishops.

Bishop Jaime Soto of Sacramento, California, highlighting that the country just observed Veterans Day, said it should be noted that among veterans there exists a significant number of immigrants and children of immigrants who sacrificed their lives serving the United States.

In that light, the Trump administration's immigration policy the bishops were examining are "a betrayal of the ideals and the sacrifices that these men and women have made and that their families have made," he said.