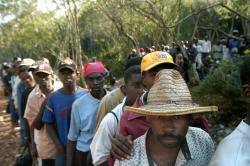 Men wait to work at a sugar plantation. (Walter Astrada)

Vanity Fair’s February 2001 article by Marie Brenner, “In the Kingdom of Big Sugar,” was an exposé on the business and labor practices of the Fanjul Family’s Florida sugar industries (that includes Domino Sugar). Brenner’s article generated several documentaries revealing the disturbing hidden reality of human rights violations that include trafficking in persons, the slave trade, child labor, deprivation of citizenship and other illegal work practices. The sugar triangle, where these practices continue with little reform since slavery was introduced to the Americas, includes Florida, Jamaica and the Dominican Republic. Two documentaries in particular, “The Sugar Babies” and “The Price of Sugar,” both released in 2007, make it clear that it is the blood, sweat and tears of cane workers that put the sugar on our tables, and into almost every processed food product in the United States.

Director/writer William Haney’s film, “The Price of Sugar,” features Fr. Christopher Hartley, a Spanish priest working in the Dominican Republic. The film was produced by Tim Disney, great-nephew of Roy, and released in 2007 by Haney’s company, Uncommon Productions. The film enjoyed a brief theatrical run and made the festival circuit, winning a Gabriel Award, as well as being short-listed for an Academy Award nomination. In 2007, the Dominican Republic’s major sugar baron family, the Vicini Group, cited in the film, filed an anti-defamation lawsuit and halted the film’s commercial release on DVD.

“The Price of Sugar,” narrated by the late Paul Newman, follows the life of Hartley between 2004 and 2006 as he ministers to his parishioners, the plantation workers in San José de los Llanos.

Hartley’s parishioners are mostly Haitians who have been smuggled across the border under the cover of night with a promise of work, pay and schooling. They are relieved of their documents on the border, if they have them. Most of these 30,000 workers would harvest sugar cane by hand and then be dumped back over the border. They were not paid in cash, but in vouchers that could be redeemed at the company store. Health care was non-existent. Others have been born and raised in the bateys and thousands more are smuggled illegally each year across the Haitian/Dominican border, where they harvest sugar cane for a lifetime under appalling conditions.

Over the years Hartley and others effected some changes through education, feeding stations for the children, medical assistance from Doctors Without Borders, a strike and legal action. Some changes have endured, some have not, and the class action suit filed by the workers after Hartley’s departure, asking for a simple work contract, is in process. Guards no longer patrol the workers with weapons. Illegal trafficking of workers has diminished to a large extent, though in May, Hartley told attendees at the Catholic Media Convention in Anaheim, Calif., that it has resumed. Workers are paid in cash and can leave the plantation (although they are subject to arrest if found without identity cards).

According to the filmmakers, 100 percent of Dominican sugar exports end up in U.S. markets and American taxpayers subsidize the price paid to Dominican companies. In 2006, the United States paid 43 percent more for Dominican sugar than the price of sugar on the world market.

Hartley’s personal story is compelling. He is the eldest son of the heir to the British Hartley Jelly Company and a Spanish aristocrat. His family speaks of how surprised they were when at the age of 15 Hartley felt called to the priesthood. After ordination he worked among the poor in Calcutta with Mother Teresa and then as vocation director of the New York archdiocese.

Hartley states in the film that the only reason he could carry out his ministry among the plantation workers was the assurance that he was right. In a phone interview, Hartley explained that as a seminarian he hadn’t understood the meaning of the Vatican II document Gaudium et Spes (“Pastoral Constitution on the Church in the Modern World”), but that it became clear during his ministry in the Dominican Republic. Now having been asked by Dominican Republic church authorities to leave his parish, he serves in a remote parish in Ethiopia.

Hartley also appears in Amy Serrano’s 2007 film “The Sugar Babies” to introduce the children of the bateys and their multilayered misery and poverty. In “The Price of Sugar,” Hartley, however, is front and center. He insists that his reason for collaborating with director Haney was to bring attention to the exploitation of his parishioners, and he achieves this. “My aim, my goal always, is to draw attention to the people who are suffering such misery.”

Hartley says that the most difficult task was organizing the workers to strike because he first had to teach them that they had rights. Aside from the outraged Dominicans that the film says were paid to carry out street demonstrations, only one voice, an American Peace Corps worker, sounds a negative view, but she later ends up admiring the priest anyway.

Film critics called the film on its release blistering and inspiring, and I agree. Its images and narration make for a severe indictment of the sugar industry from grower to market to consumer.

The filmmakers say they tried to interview the Vicinis but were refused. Is there some aspect the filmmakers left out? Did they massage facts or camera perspectives to prove a point unfairly? Perhaps we will know more of the story when the lawsuit against Uncommon Productions is settled.

Regardless, many forms of human trafficking and slavery continue more than at any time in the history of the world. “The Price of Sugar” implores the viewer to consider the ethics of the sugar industry and the moral dimensions of greed. The film is a call to action.

“The Price of Sugar” is available on DVD to churches and universities at www.thepriceofsugar.com; “The Sugar Babies” can be ordered online at www.sugarbabiesfilm.com.

Sr. Rose Pacatte, a Daughter of St. Paul, is the director of the Pauline Center for Media Studies, an award-winning writer on film and scripture, and a media literacy education specialist.

Doctrine of Discovery: A scandal in plain sight

Photographs connect inmates in solitary confinement to outside world

A legacy of Latin@́s theologizing on borderlands